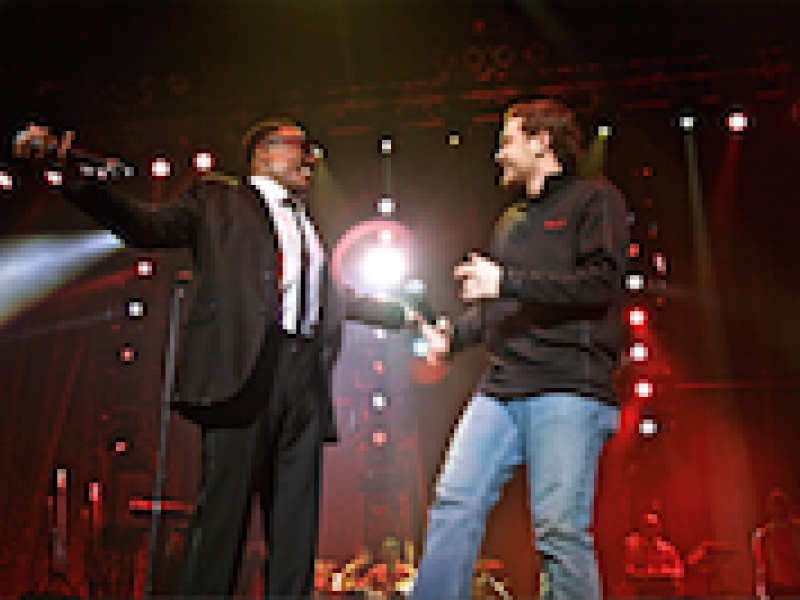 McCreery has been a fan of Wilson’s since the young singer/songwriter was in 8th grade and heard the song “Charlie Last Name Wilson” on the radio. The North Carolina-native took a group of family and friends to see the show and was surprised himself when Wilson sent word that he wanted McCreery to join him on stage. The two singers spent some time after the show getting to know each other.

“That was a night I’ll never forget” said McCreery. “Charlie is an amazing performer and such a gentleman. I never expected to meet him let alone be asked to join him on stage – that was a huge honor.”

In other McCreery news the life-long sports fan will make a return appearance on Sports Illustrated’s live online show “SI Now” this Monday Feb. 23 at 1:00 PM/ET (12:00 PM/CT) broadcast on SI.com. He recently appeared on the show last week when “SI Now” was broadcasting live from Nashville. To see up-close video of McCreery and Wilson onstage via YouTube click here.

To see video of the performance with better audio that was shot further away from stage click here.

The Mercury Nashville / 19 / Interscope Records recording artist is currently writing songs and preparing to work on his upcoming third album. McCreery scored two consecutive Top 10 hits (“See You Tonight” and “Feelin’ It”) from his sophomore album See You Tonight which debuted at No. 1 on the Billboard Top Country Albums chart. That album’s title song co-written by the singer was one of three singles from the “American Idol” champion that were certified Platinum by the RIAA in the same week (the other two being “The Trouble with Girls” and “I Love You This Big” from his Platinum-certified first album Clear as Day which debuted at No. 1 on the Billboard Top 200 Albums chart). The ACM CMT Music ACA and ICM Award winner will be performing at the Florida Strawberry Festival in Plant City Florida on Feb. 27 and the Sunrise Theater in Ft. Pierce Florida on Feb. 28. He will join Rascal Flatts on the road this summer beginning in May. For more information and additional tour dates visit www.scottymccreery.com.