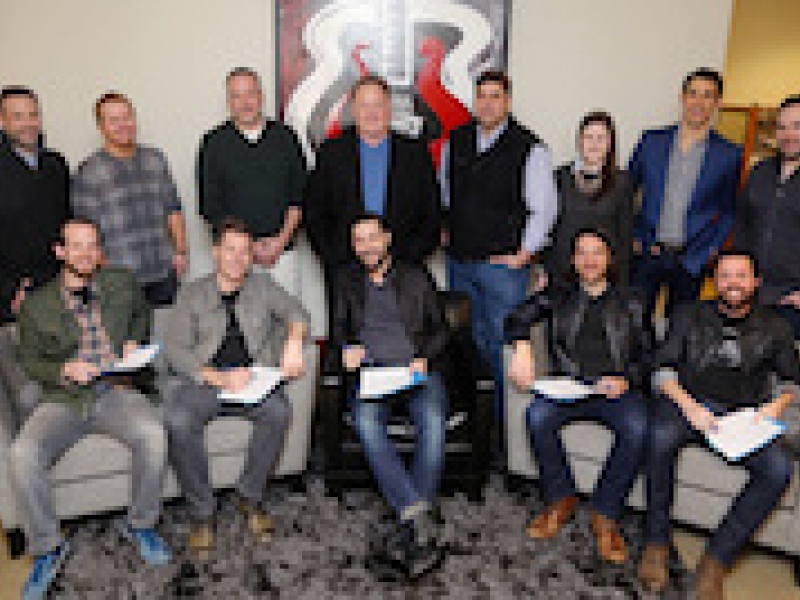 NASHVILLE Tenn. - (Thursday Feb. 26 2015) – Turns out all those country music experts were right: Old Dominion is the band to watch in 2015. The hard-working hard-rocking Nashville quintet has signed with RCA Nashville taking the next step on a path that started 10 years ago. The move comes months after the group released its self-titled debut EP and as its hot new single “Break Up With Him” climbs the charts.

"We couldn't be more excited to join the RCA Nashville family" shares frontman Matt Ramsey. "As a band we are eager to start our next chapter and are grateful for the opportunity to do that with the support of an amazing promotion and marketing team in RCA."

Old Dominion comprised of Matthew Ramsey Trevor Rosen Whit Sellers Geoff Sprung and Brad Tursi lands the deal 20 months after signing with Morris Higham Management. The news comes as Old Dominion prepares to head out on Kenny Chesney’s The Big Revival stadium tour this summer a career-making stage that has put many future stars in front of millions of fans.

It’s been those fans won over a decade on the road who have driven Old Dominion's breakthrough. Their reaction to the independently released “Old Dominion” EP--produced by a savvy hit-making GRAMMY Award-winning producer and songwriter Shane McAnally--caught the attention of program directors across the nation. “Break Up With Him” an unconventional love song that that mixes rock country and blues with a bit of hip-hop swagger reached No. 1 on SiriusXM’s "The Highway Hot 45 Countdown" for six weeks and was added by major-market program directors as an “album cut.” The band later released it as a single by popular demand and it’s climbing the charts at country radio.

The deal with RCA Nashville where Old Dominion joins a roster that includes Garth Brooks Miranda Lambert and Jake Owen means more music is on the way.

“There has been a VERY loud buzz about Old Dominion around the Sony Music Nashville offices for some time now; so much that the three imprints were all fighting for the chance to work with the band” says Sony Nashville CEO Gary Overton. “I am pleased to announce the signing of Old Dominion to RCA Records Nashville.”

"Rarely in our business do you meet artists who are a 'triple threat'-- singer songwriter and musician. On top of those qualities which each of them possesses Old Dominion provides a truly amazing live experience" says Morris Higham Management President Clint Higham. "The team at Morris Higham Management is honored to represent the band and is looking forward to the partnership with RCA Nashville."

Along with its rowdy road schedule Old Dominion also plans to record and release new music in 2015.

For more information about Old Dominion or to hear “Break Up With Him" visit www.olddominionband.com and www.facebook.com/olddominion or follow @OldDominion on Twitter and @OldDominionMusic on Instagram.

About Old Dominion
RCA Nashville recording act Old Dominion has been writing songs and honing its live show in Music City for 10 years. While many of the group’s songs have been recorded by top artists including Kenny Chesney Keith Urban Luke Bryan The Band Perry Chris Young and more the group is currently focused on performing its own brand of country stripped down and raw but muscular enough to fit in on today’s country radio. New single “Break Up With Him” is currently at Country radio. The band released its Shane McAnally-produced self-titled EP last fall and is scheduled to join Chesney’s The Big Revival stadium tour this summer.