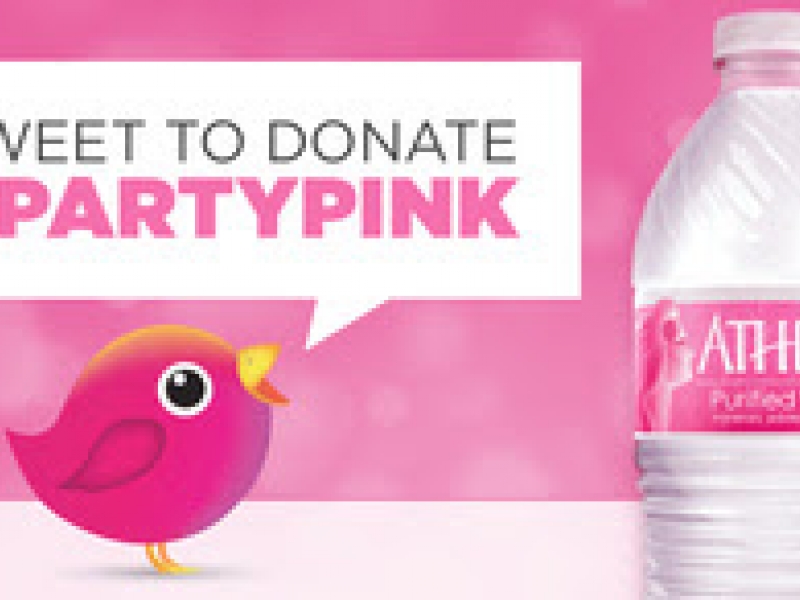 NASHVILLE Tenn. – (Sept. 29 2014) - - It’s almost time! Athena® bottled water will hold their private “Eat. Drink. Party Pink!” event in Nashville tomorrow Sept. 30 hosted by Ashley Eicher of AXS-TV. The invitation-only festivities will kick off Breast Cancer Awareness month and feature performances from Athena® Warriors Amy Grant and Kellie Pickler. During the after-party PANDORA® Jewelry will set up a jewelry lounge for attendees to view and try on the latest pieces from the PANDORA line.

To continue the fight against breast cancer Athena will donate $5 (up to a total of $25000) to the American Cancer Society for everyone that tweets or re-tweets the following message between Sept. 29 and Oct. 3 at http://athenawater.com/tweet: “1 mention of #PARTYPINK = $5 donation to @AmericanCancer! RT to join me & @AthenaWater in supporting the cause.”

Tomorrow morning (Sept. 30) Grant will appear on NBC-TV’s “Today” where she will debut her new song “Welcome Yourself.” After a quick flight home to Nashville she will then perform the song for the first time in a concert setting at the “Eat. Drink. Party Pink!” Event. The song will be available for sale on iTunes beginning tomorrow with seventy-seven (77) cents from each download (through December 31 2014) going to support the American Cancer Society’s fight to end breast cancer. “Amy’s song speaks to so many women who are busy caring for others and do not welcome themselves to the moment” says Donna Staton Vice President Marketing Athena. “The funds raised from this song will support education and research programs and will make a difference in the fight against breast cancer.”

Athena bottled water supports the American Cancer Society in the fight to end breast cancer. The company’s donation will benefit the Society’s groundbreaking cancer research help those diagnosed with cancer and ensure access to screenings and treatment. For breast cancer information or support contact your American Cancer Society 24 hours a day at 800-227-2345 or visit cancer.org.

About Athena® bottled water
Created for the cause by a breast cancer survivor in 2003 Athena bottled water was purchased by DS Services of America Inc. (DS Services) in 2010. DS Services is a national direct-to-consumer provider of bottled water office coffee and water filtration services. DS Services offers a comprehensive portfolio of beverage products equipment and supplies to approximately 1.5 million customers through its network of over 200 sales and distribution facilities and daily operation of over 2100 routes. With one of the broadest distribution networks in the country DS Services can provide service to approximately 90 percent of U.S. households and efficiently services homes and national regional and local offices. DS Services is dedicated to achieving its mission of becoming America’s favorite water coffee and tea service provider where consumers live work and play. Visit athenawater.com for more information.

About PANDORA®
For more than 30 years PANDORA has been making its mark in the international fine jewelry industry and is world-renowned for its high-quality hand finished designs made from genuine materials at affordable prices. The collections inspire women to embrace their individuality with romantic and feminine pieces that capture the unforgettable moments of life. The strength of the PANDORA charm bracelet is the detailed design the high quality and the unique threaded bracelet system (U.S. Pat. No. 7007507). The affordable luxury collections include customizable charm bracelets rings earrings necklaces and watches made from sterling silver and 14K and 18K gold. Perfect for any occasion PANDORA jewelry is sold in over 80 countries on six continents in over 10000 points of sale including approximately 1100 PANDORA branded concept stores. To view the PANDORA collection build a personal piece online or locate a jeweler please visit PANDORA.net. For news and updates find us on Facebook or follow us on Twitter.

About Amy Grant
Amy Grant's career spans over 25 years and stretches from her roots in gospel into becoming an iconic pop star songwriter television personality and philanthropist. She has sold more than 30 million albums had six No. 1 hits and been awarded a star on the Hollywood Walk of Fame. In addition to her six GRAMMY Awards Grant has earned 26 Dove Awards (including four Artist of the Year Awards). Her book Mosaic: Pieces of My Life So Far debuted in 2007. Conventional wisdom has it that Grant put Contemporary Christian music on the map. She achieved such breakthroughs as being the first Contemporary Christian artist to have a platinum record the first to hit No. 1 on the Pop charts and the first to perform at the GRAMMY Awards. Perhaps her greatest professional accomplishment was to open the door for a flood of other artists in pop and rock to sing about faith and soul and family and still grasp stardom. With that her legacy as one of the most influential artists of the past couple of decades is assured. Yet her legacy will most certainly reach beyond her music. Several of her friends are breast cancer survivors and Grant and her husband Vince Gill have contributed their time and voices to numerous cancer causes. As an Athena® Warrior Grant reaches out to women battling breast cancer and to those who love them with quiet determination and true compassion. She sings about love and loss faith and heartbreak hope and healing. Her life is as genuine – and as beautiful – as her songs.

About Kellie Pickler
Award-winning country singer Kellie Pickler lives straight from her heart. Few can bridge life and art story and song so vibrantly and compellingly. Her rise to stardom began on “American Idol” when she was just 19. A small-town North Carolina girl who knows her family history made her into the strong spunky and resilient person that she is today. Pickler’s beautiful spirit and natural good humor won the hearts of countless fans. After placing sixth on “American Idol” in 2006 she went on to record her first album which produced three Top 20 hits was certified Gold and has sold more than 900000 copies. Since then Kellie has continued to record hit albums perform in concert and earn the admiration and affection of countless fans serving as both an inspiration and role model. Her critically-acclaimed third album 100 Proof was named Rolling Stone’s Country Album of the Year in 2012. She has participated in seven USO tours thus far and has worked with multiple charities. In 2013 Pickler competed on “Dancing with the Stars” which she and her partner Derek Hough ultimately won. Soon after she released her latest album The Woman I Am. But despite her stardom she remains a delightful approachable woman with a wide-open heart. When her best friend Summer Miller was diagnosed with breast cancer at age 36 in 2012 Pickler knew she wanted to flight this battle alongside her. A week before Miller started chemotherapy Pickler shaved her head in solidarity with the friend she calls her sister. She asked Athena® Water to join her in spreading awareness about breast cancer to younger women. Miller is thankfully cancer-free now. In honor of her friend Pickler proudly serves as an Athena® Warrior and continues to fight for a cure.