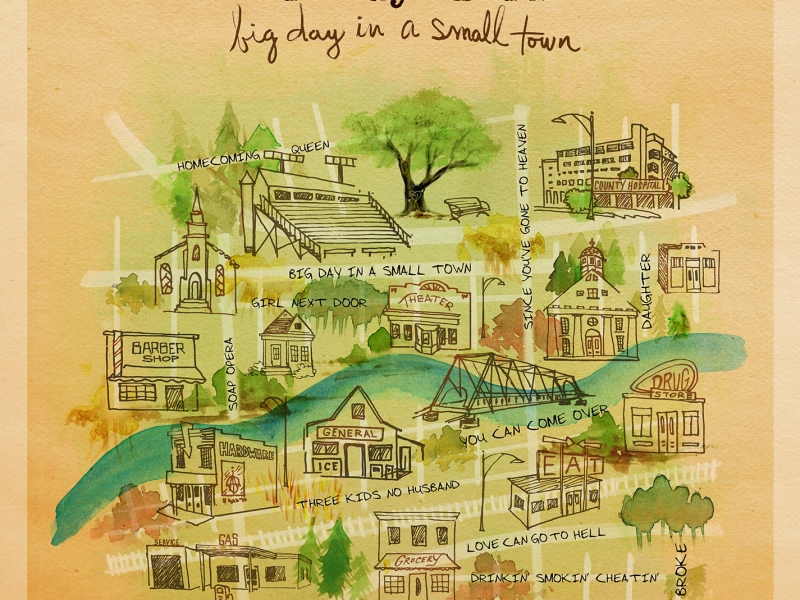 NASHVILLE, Tenn. (Wednesday, June 1, 2016) -- “Let’s get this out of the way: Brandy Clark is currently the best songwriter in Nashville,” Matthew Hendrickson with Garden & Gun said earlier this year (April/May issue). NPR’s Otis Hart also raves, “The award-winning country songwriter has been responsible for some of Nashville’s most memorable output since she established herself on Music Row in 2010.” However, it’s her June 10 sophomore album release, Big Day In A Small Town, that has the CMA-Award Winner and four-time GRAMMY nominee doing more than just showcasing her writing, it shows her “handling her transformation from behind-the-scenes songwriter to woman in the spotlight pretty effortlessly” (Randy Lewis, Los Angeles Times).

With a debut like 12 Stories—an album that was named the best album of 2013 in any genre by New York Magazine’s Jody Rosen, New York Post’sMichaelangelo Matos, NPR’s Ann Powers, and Boston Globe’s Sarah Rodman; was the No. 2 record for Fresh Air’s Ken Tucker; a top 10 choice for Los Angeles Times’ Randall Roberts and The New Yorker’s Sasha Frere-Jones; and among the top five country albums of the year byRolling Stone, among many other honors—Brandy Clark knew the bar had been set high, but with that pressure also came a responsibility.

“I like to say that Big Day is 12 Stories’ cousin,” says Clark. “They’re definitely related, but I didn’t want the songs on our new album to just be an extension of what we’d covered before. I’ve lived a lot in those few years. I had never toured before 12 Stories, so that was a big change in how I personally approached the new music… I would definitely say those experiences coupled with a new producer in Jay Joyce (Eric Church, The Wallflowers, Amos Lee, Emmylou Harris, Little Big Town) helped shape Big Day In A Small Town.”

The biggest challenge Clark faced with the new album was coming to grips with the real reason why she wanted the album to feel like it could take place in a small town with very vivid and often real-life-based characters (“Homecoming Queen” and “Big Day In A Small Town”) as well as encompass experiences everyone can relate to (“You Can Come Over” and “Love Can Go To Hell”) whether you live in a small town or a big city. The Morton, Wash.—Population 1,117—native drew on a very specific memory for the album’s inspiration: her father’s funeral.

“My dad was killed in a logging accident in July, right before 9/11,” Clark tells Nash Country Daily. “I remember after 9/11 happened, everybody was glued to CNN, and I thought ‘since my dad died the world had gone to hell.’ The idea came to me then, but it was just too raw at the time. I started thinking about how a lot of times families really fall apart when you lose a big, central figure. Fast forward to many years later, I had become friends with [songwriter and producer] Shane McAnally. We were driving home from Tunica [Mississippi], and I told him that idea, and that I really wanted to write it, but it just feels like there’s no hope in it. And he said, ‘Even if there’s not any hope in it, we need to write it.’ And so we wrote it. The seed of it came from losing my dad and things we’ve both seen happen and just how it’s hard to go home after you lose somebody.” Clark’s memory of her father’s funeral having to be held at the high school gymnasium because so many people wanted to attend and pay their respects was the catalyst for this album’s concept and ultimately even the reason for her deep-seated love of small towns.

Clark wrote or co-wrote every song on Big Day and will perform her single, “Girl Next Door,” on both Late Night with Seth Meyers and Live with Kelly in June around her album’s release.