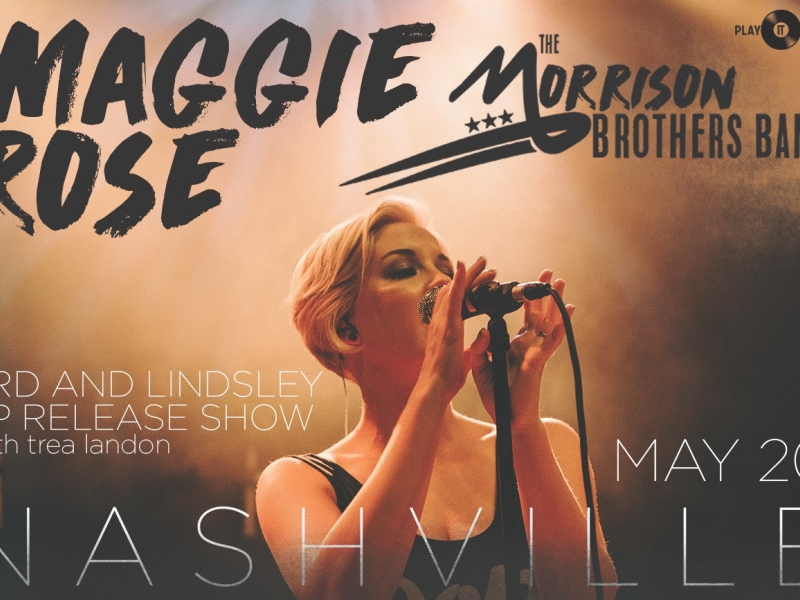 NASHVILLE, Tenn. (Friday, May 20, 2016) – Play It Again Records, the newest venture by Nashville hit maker Dallas Davidson, is taking over 3rd& Lindsley tonight, May 20 at 8 p.m. to celebrate the recent EP releases by Play It Again artists Maggie Rose and The Morrison Brothers Band. Both acts will perform select songs from their respective releases, with fellow Play It Again songwriter Trea Landon opening the show.

The Morrison Brothers Band, a modern Southern rock/country group consisting of two pairs of brothers, released their self-titled, six-song EP on Friday, May 13. Rose, a fellow Play It Again singer-songwriter, produced the project.

The brothers’ EP features current upbeat single, “Party At My House,”which was written by The Peach Pickers (Rhett Akins, Ben Hayslip, and Davidson). A music video for the feel-good jam will be released in the coming weeks.

Rose recently released her own EP, The Variety Show Vol. 1, which showcases her strong pop-heavy vocals. The performer was the first artist to sign with Davidson publishing company. Since then, she has gone on to win an Emmy award, perform multiple times at the Grand Ole Opry and release a debut album that was deemed “one of the year’s best country releases” by the New York Times before embarking on her latest project,The Variety Show Vol. 1.

Doors for tonight’s show will open at 6:00 p.m. and performances begin at 8:00 p.m. For ticketing info and more, click here.

The Morrison Brothers Band is currently on tour around the country. Tour dates are as follows:

Maggie Rose will also hit the road this summer. Tour dates are as follows:

About Maggie Rose
With super-sized vocals and genre-spanning songwriting chops that blur the lines between country, pop and rock, Maggie Rose has earned a loyal audience as the first artist signed to Dallas Davidson's Play It Again Publishing, both in her adopted hometown of Nashville and beyond. It's an audience that's grown with her for nearly a decade, spending days as a songwriter and nights sharing the stage with artists like Randy Houser and Sheryl Crow. Throughout it all, Rose has established herself as a rare triple threat: a multi-faceted artist who can write, perform, and produce a hit song. Rose's latest release, The Variety Show - Vol. 1, showcases her stronger-than-ever personality and vocals with songs like "Love Me More," and "Same Sky" from the EP. The 36-time Grand Ole Opry performer will be touring throughout the summer including dates with Tim McGraw, Hunter Hayes, Lee Brice, Cassadee Pope and Rachel Platten. Follow-up EP, The Variety Show - Vol. 2 is due later this year.

About The Morrison Brothers Band
Drawing on their musical roots in Nashville, New Orleans, Los Angeles, and Washington D.C., The Morrison Brothers Band play a unique brand of country/rock music. Founded in 2007 by brothers Truman and Willie Morrison, the group's award-winning sound took form in their hometown of Washington, DC with the additions of brothers Matt and Kevin Nolan. The band is currently based out of Nashville and is performing regularly in the Eastern, Mid-Western, and Southern U.S. In the last few years, The Morrison Brothers Band has opened for Merle Haggard, Leon Russell, Frankie Ballard, Maggie Rose, Old Dominion and Big Smo, and shared stages with many of the biggest acts in country music today from Alan Jackson to Alison Krauss to Tim McGraw. The group’s highly anticipated new EP Self-Titled, produced by acclaimed recording artist and fellow DC native Maggie Rose, was released May 13, 2016 for Play It Again Records. The band also recently wrote and recorded the new theme song for The Washington Capitals for Comcast Sports Net, and their video for the song can be seen on television prior to games. For upcoming tour dates and more, visit http://themorrisonbrothersband.com.