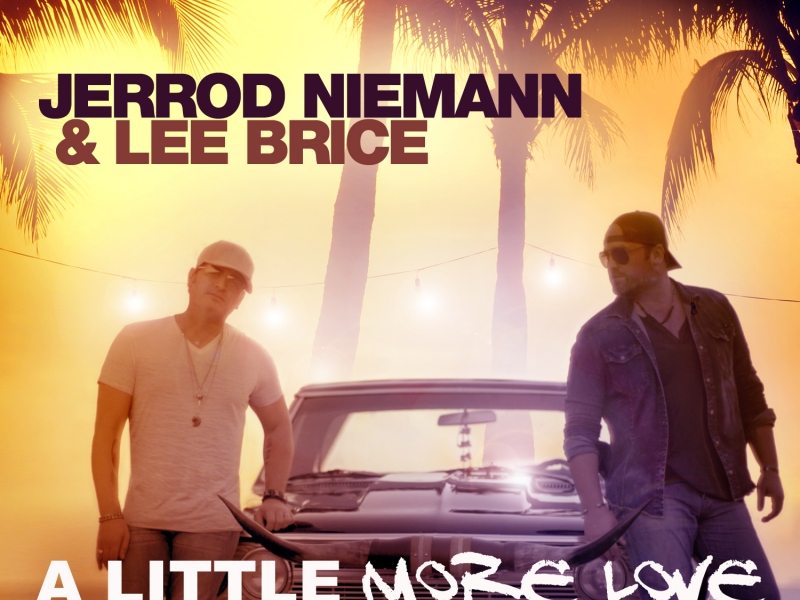 NASHVILLE, Tenn. (Friday, April 29, 2016) – Since they first met in 2002, platinum-selling Country artists Jerrod Niemann and Lee Brice have become close friends.  They’ve written together, toured together and partied together, but they’ve never released music together – until now. Curb artists Niemann and Brice have released a new duet, “A Little More Love,” to iTunes today.

Over the groovy, reggae-inspired beat, Niemann and Brice harmoniously encourage listeners to “Make a little more love / Make a little less money / Catch a little more buzz / Off a little less honey,” a sentiment that Niemann felt perfectly represented the laid-back and generous spirit both artists aim to foster with their music and live shows. “Lee and I have always talked about recording some music together,” shares Niemann. “We hope this tune will have our fans smiling and singing along with their windows down and the radio up all summer long!”

About Jerrod Niemann
Nashville hitmaker Jerrod Niemann is one of country music’s most original and talented innovators.  Jerrod’s new single is a duet with his good friend and labelmate Lee Brice, called “A Little More Love.” Jerrod, Lee and Jimmie Lee Sloas produced this feel-good summer song.  Jerrod is also adding the finishing touches to his forthcoming album on Curb Records which will follow his RIAA Gold-certified multi-week No. 1 smash, “Drink to That All Night,” from his High Noon album, on which Niemann co-wrote eight of the 13 tracks. Niemann’s chart-topping major-label debut, 2010’s Judge Jerrod & The Hung Jury, produced the No. 1 smash and RIAA-certified Platinum digital single, “Lover, Lover,” and the Top 5 and RIAA-certified Gold digital single, “What Do You Want.” Second release Free The Music featured the Top 15 single “Shinin’ On Me” and the poignant ballad “Only God Could Love You More.” Niemann has quickly become a fan and industry favorite, earning award nominations from the Academy of Country Music, the Country Music Association and CMT while headlining his own shows and touring with such artists as Dierks Bentley, Brad Paisley and Keith Urban.

About Lee Brice:
Having just wrapped up his headlining “Life Off My Years” tour, the "evocative, rough-edged singer" (New York Times) returns to the studio to work on songs for a new album and help promote the summertime hit, “A Little More Love," a duet with long-time friend and new Curb label mate, Jerrod Niemann.  “A Little More Love" is Jerrod's new radio single, his first on the Curb imprint.

Lee Brice recorded his third studio album, 'I Don't Dance,' in Nashville— writing and producing 13 of the deluxe edition's 16 songs, and playing almost every instrument on many of the tracks as well. The Sept. 9, 2014 album yielded RIAA Platinum and Gold singles and recently celebrated the Top 10 radio single, "That Don't Sound Like You."

"Nobody in Nashville writes better love songs right now than Brice," says USA Today. Of 'I Don't Dance' the New York Times says, "the songs are sturdy, the mood aching. That's a noble mode, and a lane Mr. Brice has almost wholly to himself in modern country."

Lee received two ACM awards in 2015 for "I Don't Dance" and performed on NBC's "The Voice," ABC’s “The Bachelor Live,” as well as the network’s "CMA Music Festival "Country's Night To Rock.”  He was featured by USA Today as a leader in social media for being one of music’s earliest adopters of Periscope as a way` to connect with fans. The 2015 CMA "Single Of The Year" nominee played his 50th state show in Rome, GA (11.15), becoming the only country artist to perform in all 50 states in 2015.