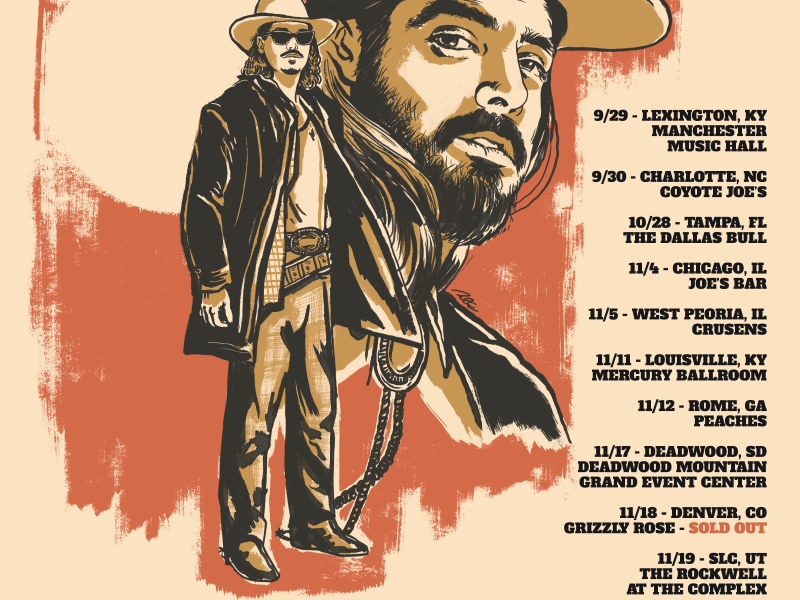 NASHVILLE, Tenn. – This year saw Ian Munsick spread his Rocky Mountain sound across the nation as he hit the road alongside superstars Cody Johnson and Morgan Wallen. Now it’s his turn: Munsick will wrap 2022 with his own headlining Westwood tour. Visit HERE for ticketing and more information. Joining him on the run, which will hit major cities including Charlotte, Chicago, Denver and Tampa, is fellow Wyoming native Ryan Charles.

“We’ve hit the road HARD the last two years and it’s all been leading up to this," reflects Munsick. "We’ve played venues of all shapes and sizes from clubs to arenas. Sharing the stage with my heroes has taught me so much about performing, but now it’s time to take those lessons to my fans. It doesn’t matter if we’re playing on the east coast, or in mountain time… you don’t wanna miss these two Wyoming cowpokes punchin’ their way across the country on the Westwood Fall Tour.”

Munsick continues to showcase his western-influenced brand of country music in his latest releases. He released “Long Live Cowgirls” (with Cody Johnson) at the top of the year, and it has since earned more than 45 million streams (LISTEN HERE). It topped SiriusXM The Highway’s Hot 30 Countdown and has been praised for its “gorgeous, wide-open fiddle… [that] will make you feel like you’re riding a horse through the plains of Texas or… the Rocky Mountains of Colorado” (Whiskey Riff).

The breakout singer / songwriter most recently released faith-driven story song “More Than Me” (LISTEN HERE) from his forthcoming sophomore album. As CMT described, “His signature Rocky Mountain sound intertwined with the romantic lyrics makes the heartfelt ballad a perfect wedding hymn.” Both “Long Live Cowgirls” and “More Than Me” hail from Munsick’s forthcoming sophomore album, with more new music due soon.

ABOUT IAN MUNSICK
Breathing fresh Rocky Mountain air into the Nashville music scene, Ian Munsick is pioneering a new brand of country. The Wyoming-born singer / songwriter’s upbringing was a mix of working the ranch and working crowds. Under the tutelage of their fiddle-playing father, Munsick and his two older brothers grew up playing everything from bluegrass to The Beatles. Captivated by traditional lyrical truth and the modern soundscape, Munsick followed his ear to Music City. After establishing a robust touring career as an independent artist, he signed a major label record deal with Warner Music Nashville in 2020. Since then, he has accumulated nearly 250 million global streams as well as accolades from Spotify (“Hot Country Artist to Watch”), MusicRow magazine (“Next Big Thing”) and more. His debut album Coyote Cry features his mile-high tenor underscoring self-penned songs that conjure “equal parts epic adventure and down-to-earth wisdom” (American Songwriter). It marks the dawn of western pop-laced country, pulling a thread straight from Chris LeDoux through Post Malone. Imagery-soaked ode to the west “Long Haul” earned Munsick his second iHeartRadio Rocky Mountain Country Music Award for Song of the Year. The recent releases of “Long Live Cowgirls” (with Cody Johnson) and “More Than Me” are ushering in the next chapter of his musical saga… and fans are finding that, with Ian Munsick, western country is reborn.

ABOUT RYAN CHARLESWestern rapper Ryan Charles hails from the valley of Buffalo, Wyo. Similar to his hometown, once referred to as the most lawless town in America, Charles brings a style all his own — meshing the cowboy lifestyle with the flow of 2000’s rap. A natural-born entertainer, Charles quickly became one of the most skilled freestyle rappers on the school bus, eventually making the move to Seattle, Wash. to pursue his music career more seriously. As an artist, Charles has released singles including the jiggy buckaroo bop “Gettin’ Western” in 2020, “Old Dirt Fancy” in 2021 and a feature on Ian Munsick’s “Cowboy Killer” in 2022. Charles quickly became a stand out contestant representing his home state on NBC’s “American Song Contest” where he competed with his original track “New Boot Goofin.’” Known for his signature fashion sense, light-hearted twang and high-energy live shows, Charles continues to work on new music with River House Artists in Nashville, Tenn.###