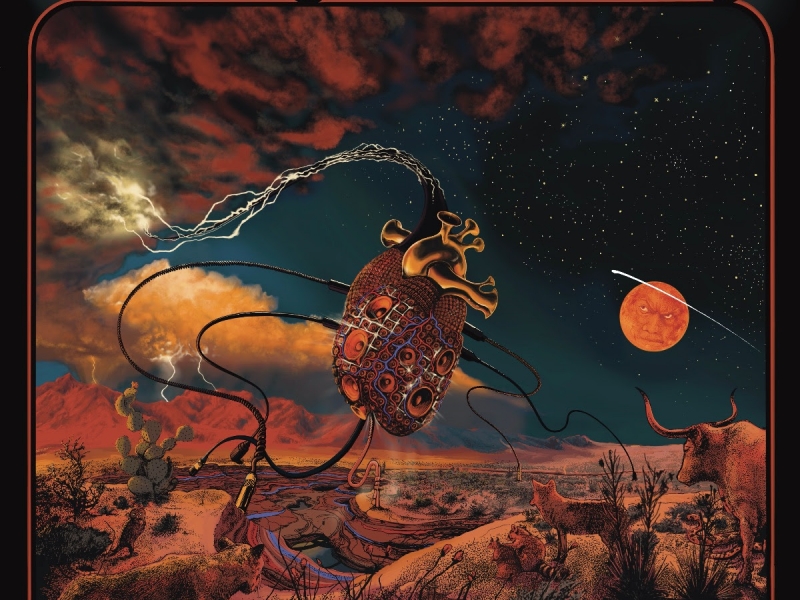 After spending 21 days isolated at the 2,300-acre Sonic Ranch studio deep in the heart of their native Texas, just miles from the U.S./Mexico border, the genre-bending band has doubled down on what they do best: sharing honest truths with no-holds-barred instrumentation, letting the self-produced music speak for itself. With today’s release of the 12-song album named for the border town that is home to the pecan orchard-filled recording complex, the six-piece has taken their solid decade-plus foundation and pushed themself to further explore new sonic landscapes.

Tornillo as a whole does exactly that, drawing as much inspiration from Nirvana as from John Prine – even adding the legendary McCrary Sisters’ gospel influence to the project on background vocals. With vocalist Cody Cannon leading the way on songwriting, the album also features writes from guitarist John Jeffers and fellow bandmembers Jamey Gleaves and Tony Kent, as well as rising singer/songwriter Aaron Raitiere (Anderson East, Oak Ridge Boys, A Star is Born). As American Songwriter declares, the band is “in a league of their own with their signature hard-rocking sound on full display… Saddle up and settle in because Whiskey Myers is ready to take listeners on a country, rock, and blues-infused wild ride.”

“Southern rock is alive and well on Whiskey Myers’ Tornillo – and it comes with a brassy border-town swagger,” adds Nashville Lifestyles in the July print issue on stands now. “Equal parts train songs, tenacious energy, and Tabasco… their lawless musicality burns like the sun.”

With the instrumental title track opener setting the horns-infused scene for the energy to follow, lead single and recent Texas regional radio chart-topper “John Wayne” follows as the first full song on the album as Cannon’s split-rail witness of life and survival emerges throughout the manifesto of music’s power to save. The surge and swagger, harmonica wails and wah-wah guitar solos suggest the momentum of outliers making a run for it, but a closer listen shows a band landing firmly in its own definitive space – never eschewing their roots; building on the influences a bunch of boys from Palestine, Texas twisted into an electric guitar-heavy sonic temple that reached across Skynyrd, The Stones circa “Heartbreaker,” Little Feat, J.J. Cale, Led Zeppelin, Waylon Jennings, The Black Crowes and ‘80s era Hank Jr.

Those guitars define the fury and the burn that gives Whiskey Myers its edge. From the hard-hitting take on spousal battery and retribution “Antioch” (celebrated by Billboard for its “gritty vocal that’s equal parts bite and vigor”) to the “Call Me The Breeze” evoking boogie of “Feet’s,” Tornillo starts hot, slinging truths about a world that goes down hard and is survived by those who can dig in and bring it every day – invoking Levon Helm, singing of Fallujah nights, embracing the Book of Revelation and seeking higher ground for working people through their churning guitars as much as the turning of the wheels that have carried them to over 2,500 live dates, making them one of the hardest touring bands in the world.

Live is how the only band to perform as part of the “Yellowstone” storyline connects, already selling over 250,000 tickets this year with sold out shows from coast to coast. Speaking truth to power, smoking that smoke, turning the intensity up and wiping away the blather of the media, they rage against the machine but also invoke vulnerability and a desire to outrun the dysfunction of our world. Whether it’s the larger priorities in a relationship coming apart slow jam “For The Kids,” the reckoning with mistakes and seeking grace on the haunted closer “Heart of Stone” or the passing knowledge earned and lessons learned on to one’s children “Other Side,” there’s wisdom and a desire for a better life.

“I’m not speaking for anybody, and I have no end goal,” reflects Cannon. “I’m just a musician, not someone qualified to tell anyone. But people do gravitate to songs they can connect to. Is it the melody? The lyric? Maybe it’s all of it. I just know you get older; you take things more seriously… Sometimes someone’ll tell me, ‘This song saved my life.’ The idea my song moved them so much it changed their life, you’re gonna go out and do the best you can because of that. There’s a lot of weight on your shoulders. But how can you complain about that?”

That weight is something Jeffers’ bucolic, almost lullaby “Heavy On Me” tackles directly. Confessional, he measures his life and family, plus his willingness to support everything that comes with it. It’s a song that’s as much divine surrender as facing what lies ahead. Jeffers also contributes the book-ending witness “Whole World Gone Crazy,” measuring the state of the union over a lean beat and guitar blurts that melt into a full-on band chorus.

“With this authoritative and impressive album, Whiskey Myers once again succeed in [pushing] limited borders wider with creativity and faith in their own substantial talents,” asserts Holler of the band’s ability to stretch the confines of traditional Southern rock. “With Tornillo, their recent burst of crossover popularity should be set to last.”

As that genre-crossing prowess proves, what Classic Rock declares of Whiskey Myers has never been truer: “Authenticity: you can’t buy it, you can’t bluff it. And you can’t beat it when it comes to delivering dirty, down-home, electric guitar music from the American South.”

Fans can see the new music and more live as the Tornillo Tour continues through the summer with numerous already-sold-out stops. Whiskey Myers will also host the return of their personally curated Firewater Music Festival Sept. 29 – Oct. 1 outside Kansas City.

For the most up-to-date information on the album and all tour dates, visit WhiskeyMyers.com and follow on social media @WhiskeyMyers.

About Whiskey Myers
Genre-bending band Whiskey Myers have played more than 2,500 live shows to ever-increasing crowd sizes since their emergence in 2007. In addition to headlining their own sold-out shows from coast to coast and performing at marquee festivals Bonnaroo, Stagecoach, Download and more, the six-piece was also personally selected to open The Rolling Stones’ Chicago stadium show in 2019. Their latest self-produced album, Tornillo, available everywhere now, follows their fifth studio album, Whiskey Myers, out now on the band’s own Wiggy Thump Records, which debuted at No. 1 on both the Country and Americana/Folk sales charts, at No. 2 on the Rock chart and No. 6 on the all-genre Billboard 200 chart (No. 3 among new releases). In total, Whiskey Myers have sold more than 1.3 million albums and amassed nearly 2 billion streams while earning four RIAA Gold & Platinum certifications. The band known for their high-energy live show and unique sound has also earned sync success with features (and an on-screen appearance) in Paramount Network’s hit show “Yellowstone” as well as the Renée Zellweger-led Netflix series “What/If,” the Angelina Jolie film “Those Who Wish Me Dead” and hit CBS series “SEAL Team.” USA Today describes their sound as “a riff-heavy blend of Southern rock and gritty country that has earned comparisons to the Allman Brothers Band and Led Zeppelin,” with Rolling Stone noting “it’s the seminal combination of twang and crunchy rock & roll guitars that hits a perfect sweet spot.”