CELEBRATE THE HOLIDAYS AT RYMAN AUDITORIUM 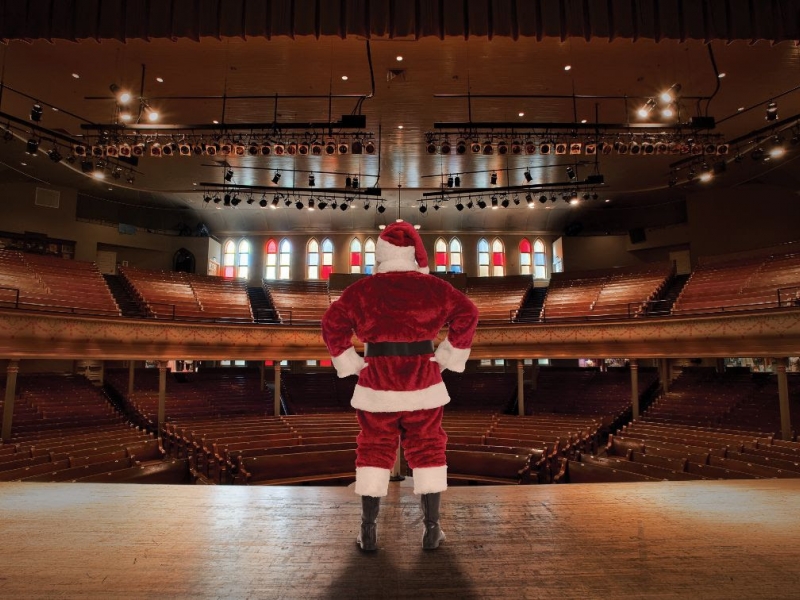 NASHVILLE, Tenn. – Ryman Auditorium will host “Santa at the Ryman” featuring photos with Santa on the historic stage, along with festive activities to accompany its daily tours on Sunday, Dec. 12, giving both local and out-of-town visitors the opportunity to create a memorable holiday experience at one of Nashville’s most famous landmark. Tour tickets are available HERE.

Santa will be available Dec. 12 from 10am to 3pm CT, and the photo with Santa is included with purchase of adult Ryman tour admission. Up to two children under 12 are admitted for free per each adult ticket purchase. In addition to photos with Santa, tour guests can also enjoy the sounds of carolers on the PNC Plaza, a very special hot cocoa bar and a “Letters to Santa” station courtesy of PNC Bank.

Starting on Dec. 12, Ryman Auditorium will also have a life-sized snow globe available on the plaza, perfect for photos with friends and family, and the Ryman retail shop will be open and filled with perfect gifts for everyone on your list.
For additional information, visit https://ryman.com/santa-at-the-ryman/.

All-vocal Country entertainers Home Free have made their mark on the music scene, racking up nearly 600,000 album equivalents globally; embarking on major international tours; amassing 446+ MILLION views and over 1 MILLION Subscribers on YouTube. The acclaimed group is set to light up the holiday season by hitting the road on their Warmest Winter Holiday Tour – showcasing songs off their most recent studio album, WARMEST WINTER (2020, Home Free Records), which features 12 festive staples, memorable collaborations and Home Free originals – all guaranteed to get you in the holiday spirit. Join us for Home Free’s Warmest Winter Tour for a perfect evening of mixed of upbeat Nashville-dipped pop hits, country and western standards, incredible harmony and quick-witted humor. Tickets start at $39.50

She & Him, the duo featuring Zooey Deschanel and M. Ward, will perform at the Ryman as part of their eight-concert tour this December, following the release of A Very She & Him Christmas’ 10th Anniversary Edition. A Very She & Him Christmas marked the pair’s third studio album and was originally released in October of 2011. The limited-edition deluxe reissue includes the album pressed on silver vinyl along with a new 7-inch featuring the “Holiday” cover backed by a take on Wham!’s “Last Christmas.” Additionally, A Very She And Him Christmas 10th Anniversary Deluxe Edition comes with a bonus download for the duo’s version of “It’s Beginning To Look A Lot Like Christmas,” a song by Meredith Wilson that Big Crosby and Perry Como popularized. Tickets start at $39.50.

Known for her three-octave range and for pioneering the classical-crossover music movement, Sarah Brightman has amassed global sales of more than 30 million units. The only artist to have simultaneously topped Billboard’s dance and classical music charts, Brightman has racked up more than 180 gold and platinum awards in over 40 countries. She is also known for her iconic star turn in The Phantom of the Opera, the soundtrack from which has sold more than 40 million copies worldwide. Brightman has performed at such prestigious events as the 2007 Concert for Diana, the 1992 Barcelona Olympic Games and the 2008 Beijing Olympic Games. Her most recent full-length studio album HYMN was released in 2018 and debuted at No. 1 on the Classical and Classical crossover Billboard charts. Accompanied by orchestra and a choir, Sarah decks the halls with show-stopping renditions of classics from the Christmas canon, along with personal holiday favorites and her greatest hits. A Christmas Symphony is sure to be an unforgettable Christmas spectacle during the most wonderful time of the year. Tickets start at $59.50.

Celebrate the holidays at the Ryman with four-part a cappella barbershop harmony! This Christmas spectacular will feature the internationally acclaimed Music City Chorus along with several special guests. Also performing on the show are local Nashville artists, Metro Nashville Chorus and Tunetown Show Chorus, in addition to other top local quartets. Join us for an evening of Christmas classics performed by some of the top barbershop groups in the world that the entire family can enjoy. Tickets start at $30.

One of Music City’s most treasured traditions will return in 2021 with Amy Grant and Vince Gill’s beloved Christmas at the Ryman residency. Tickets for the 12-concert run are on sale and will once again feature matinee performances of the cherished show. In years past, the husband and wife duo have filled the show with Christmas favorites such as “Let It Snow,” “Have Yourself a Merry Little Christmas,” “Tennessee Christmas,” “O Holy Night” and “O Come All Ye Faithful.” Traditionally, the show closes with one of the most emotional moments of the night with a rendition of “‘Til the Season Comes ‘Round Again.” The shows have been serving as the ultimate holiday tradition for many years, with music fans from across the country and around the world flocking to the historic venue to take in the sweet sounds of two of Music City’s most cherished performers. Tickets start at $40.

Multi-platinum-selling recording artist Josh Turner is releasing his first-ever Christmas album, King Size Manger, October 8 on MCA Nashville. The holiday project features fresh interpretations of the classics and introduces four originals, three of which were written or co-written by Turner. Plus, Turner is joined by very special guests including Turner’s wife and four boys singing a holiday classic, a family tradition Turner wanted to feature on this special album. In support of the album, Turner will embark on a 16-city Holiday & The Hits Tour, culminating at Nashville’s Ryman Auditorium, where the album will come to life alongside Turner’s most notable hits. Tickets start at $35.

Join Natalie Grant & Danny Gokey for a family friendly evening of Christmas music. Grammy nominated Christian vocalist and multi Dove Award winner, Natalie Grant, is a singer-songwriter from Nashville, TN. Natalie’s work has gained international acclaim, including five Dove Awards for Female Vocalist of the year. Danny Gokey is an American singer and church music director from Milwaukee, Wisconsin. He was the third place finalist on the eighth season of American Idol. After his placing on the show, Gokey signed to 19 Recordings and RCA Records Nashville as the beginning of a career in country music, releasing the single “My Best Days Are Ahead of Me.” His debut album, My Best Days, was released in March 2010. Tickets start at $35.

With 21 records to his name, a band of stellar musicians and thousands of shows under his belt, there is no end in sight to the road ahead for Robert Earl Keen. In July of 2021, Pollstar ranked Keen on its Top 20 Global Concert Tours, proof that he has blazed a peer, critic and fan-lauded trail that’s earned him living-legend and pioneer status in the Americana music world. The live performance is an essential experience for REK fans. BMI acknowledged Keen’s contribution as a road warrior in 2015 when they honored him with the inaugural Troubadour Award, followed by John Prine and John Hiatt. Tickets start at $39.50.

Continuing a Nashville tradition, two-time GRAMMY award winners Old Crow Medicine Show are once again set to ring in the New Year at Ryman Auditorium, performing for two consecutive nights on Dec. 30 at 7:30pm CST with special guest Sierra Ferrell and Dec. 31 at 9pm CT with special guest Keb' Mo'. Tickets for Dec. 30 start at $39.50 and tickets for Dec. 31 start at $59.50.