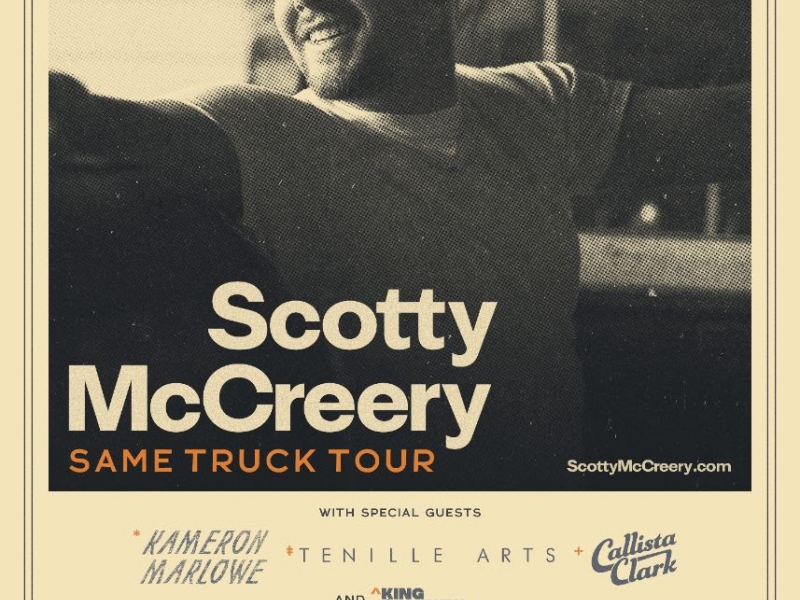 NASHVILLE, Tenn. – Following his fourth consecutive No. 1 single “You Time” and the release of his fifth studio album Same Truck, Triple Tigers recording artist Scotty McCreery keeps the momentum rolling as he announces his 2022 Same Truck Tour, featuring 15 dates across the U.S. where fans can expect to hear his new single, “Damn Strait,” along with his multiple RIAA Platinum and Gold certified hits from throughout his decade-long career. Most dates will feature either Tenille Arts, Callista Clark, or Kameron Marlowe as direct support with King Calaway as the opening act. Tickets go on sale this Friday, Oct. 29 at 10 am local time at ScottyMcCreery.com.

“I am looking forward to kicking off 2022 with my Same Truck Tour,” said McCreery. “I’m also glad to have Tenille, Callista, Kameron and King Calaway joining us for select dates. It’s gonna be a great way to start the new year!”

Last month, McCreery released his fifth studio album to applause from fans and critics, with Billboard sharing that hitmaker “continues proving his mettle not only in the recording booth, but in the writing room, as a co-writer on the bulk of the project’s songs,” while Tennessean shares, “McCreery walks a sonic tightrope that leans into his country influences while not abandoning modern Music Row hitmaking.”

McCreery gave fans a taste of what to anticipate on the Same Truck Tour as he performed his latest single “Damn Strait” on fellow Idol alum Kelly Clarkson’s “The Kelly Clarkson Show” last week, an early favorite from the album as Rolling Stone named the track a “Pick of the Week,” for its “clever songwriting, delivered by one of the genres’ best King George disciples.” Watch the television performance from Tuesday, Oct. 19 HERE.

On Same Truck, the Garner, North Carolina native shifts his perspective to reflect on the last decade of his career and life with wife Gabi and dog Moose, co-writing 10 of the 12 tracks, Billboard observing “McCreery's rich, resonant voice has never felt more confident and self-assured, and his voice as a songwriter is strong.”

About Scotty McCreery
McCreery’s new album Same Truck is available now everywhere music is sold. It contains his fourth consecutive No. 1 single “You Time” and the fan-favorite “Damn Strait,” the second single from the album impacting radio now. He achieved new heights by earning three back-to-back No. 1 hits from his album Seasons Change, the RIAA Gold-certified project which debuted at No. 1 on the Billboard Country Album chart: the RIAA Double Platinum-certified “Five More Minutes,” the RIAA Platinum-certified “This Is It,” which stayed at the top of the charts for two weeks, and RIAA Gold-certified “In Between.” McCreery co-wrote all 11 songs on Seasons Change, which Rolling Stone named as one of the “40 Best Country and Americana Albums of 2018.” All four of his previous albums have debuted at No. 1 on a Billboard Albums chart, with current combined sales surpassing 3 million copies. He’s earned one Double Platinum, four Platinum and two Gold singles; won the 10th season of “American Idol” in 2011; was named the ACM New Artist of the Year in 2011; won the CMT Music Award for Breakthrough Video of the Year (“The Trouble with Girls”) in 2012; American Country Awards for New Artist of the Year in 2011 and Breakthrough Artist of the Year in 2013; BMI Awards for writing One of the Top 50 Country Songs of the Year three times (in 2015 for “See You Tonight,” in 2018 for “Five More Minutes,” and in 2019 for “This is It”); a Carolina Beach Music Award for National Dance/Shag Song of the Year (“Barefootin’”) in 2018; and the NSAI Nashville Songwriter Award for One of the Top Ten Songs I Wish I’d Written (“Five More Minutes”) in 2018. The North Carolina native released his first book, Go Big or Go Home: The Journey Toward the Dream, in 2016; it was re-released in paperback in 2020. McCreery launched his recording career by making history in 2011 as both the first country artist and the youngest male artist of any genre to debut his first studio album, the Platinum-certified Clear as Day, at No. 1 on the all-genre Billboard Top 200 Albums chart. For more information, visit  ScottyMcCreery.com.

About Tenille Arts
Award-winning artist Tenille Arts released her critically-acclaimed Love, Heartbreak, & Everything In Between album in January of 2020, and it yielded her first #1 single, “Somebody Like That,” in April of this year. The single made history as the first song written, produced and performed by all females to top the Country charts. Her new Girl To Girl album was released October 22, 2021, and her “Back Then, Right Now” single is at radio now. Her 2016 self-titled debut EP peaked at #1 on the iTunes Canada Top Country Album Chart and cracked the Top 100 on the U.S. iTunes Country Album Chart. Earlier this year, Tenille was inducted into the CMT Next Women of Country Class of 2021 and nominated for her first ACM Award for New Female Artist of the Year. She is the only Country artist featured in YouTube’s 2021 Foundry Class. She has made an unprecedented three appearances performing original songs on the top-rated ABC TV show The Bachelor. She recently wrapped up touring with Lady A on their nationwide “What A Song Can Do Tour.” Born and raised in the small prairie town of Weyburn, Saskatchewan, Tenille now makes Nashville her home. For more information, visit TenilleArts.com.

About Callista Clark
Every song has a story and at just 18 years old Callista Clark has a lot to say. Like so many talented singer/songwriters that paved the way before her, the young songstress wields her creative gifts as both a defense and an instrument of peace as she puts her heart on display with her debut collection Real To Me, out now via Big Machine Records. Blending her love for authentic, timeless classics with the sounds of her Georgia roots, Clark “commands her career from its breakthrough beginnings” (American Songwriter). Gearing up for the release, she collaborated with many of Country music’s leading songwriters including Jonathan Singleton, Laura Veltz, Nicolle Galyon, and Emily Shackleton, among others. The proof that Clark can hold her own among Nashville’s most prominent is evident as she was recently named an iHeartCountry On The Verge Artist and her debut single, “It’s ‘Cause I Am” continues to climb as Country radio’s most successful new artist debut of 2021. She made her national television debut earlier this year with an interview and performance of the single on “Live with Kelly & Ryan” who touted her as “the next big thing in Country music.”Coming off of a whirlwind few months, she shows no signs of slowing down and was recently featured as the only Country artist in Billboard’s annual “21 Under 21” list. Her inspiring videos with which Scooter Braun (SB Projects) and Scott Borchetta (Big Machine Label Group) took notice, have amassed over 130 million views across all socials + YouTube. For more information and upcoming tour dates, visit CallistaClark.com.

About Kameron Marlowe
North Carolina native Kameron Marlowe has been touted as “the piece country music has been missing” (Everything Nash) and a “nascent talent” (Billboard). Since blasting onto the scene with his autobiographical, self-penned release “Giving You Up,” Marlowe has gone on to amass more than 213 million career on-demand streams; joined the roster of Columbia Nashville alongside superstars Luke Combs and Maren Morris; and been named an Artist to Watch in 2021 by more than a dozen media outlets and music platforms, including Amazon Music, Pandora, Spotify, Sounds Like Nashville, NY Country Swag, Country Now, and more. The breakthrough star recently wrapped his standout summer as support for superstar Brad Paisley on his Tour 2021, and will join Riley Green for the WE OUT HERE TOUR bringing his captivating live show to audiences across the country throughout the fall. With his soaring, emotive vocals and gritty, rock-infused sound, Marlowe calls upon influences ranging from Brooks & Dunn and George Strait to Travis Tritt and Ray Charles, creating a sound that reflects his life-long love of country music. Quickly becoming an undeniable force in the genre, Marlowe is set to stake his claim as the new face of country. For more information, visit KameronMarlowe.com.

About King Calaway
One of country music’s rapidly rising bands, King Calaway is proof that there’s strength in numbers. Their debut album, Rivers, released October 2019 on BBR Music Group/Stoney Creek Records, featured the hit single “World For Two,” which was the #1 most added song at country radio in its debut week. Named as one of the seven new country acts to watch out for by Billboard, the band continued to take the country music industry by storm from multiple performances at the famed Grand Ole Opry - including an incredible performance moment with the legendary Ricky Skaggs - to making their late-night television performance debut on Jimmy Kimmel Live! and an appearance on the internationally acclaimed show Neighbours. They have also performed on The Late Late Show with James Corden, TODAY and The Kelly Clarkson Show. They’ve since brought their energetic live show to various stages, including a CMA Fest debut and opening slots for Rascal Flatts and Garth Brooks. Building on this momentum, the accomplished musicians have spent the past year honing their craft as singer-songwriter instrumentalists and have emerged with a brand-new modern country sound. The now 5-piece band is comprised of Caleb Miller, Chris Deaton, Simon Dumas, Chad Michael Jervis, and Austin Luther and their new EP, Midnight, was released on August 27. For more information, visit kingcalaway.com.