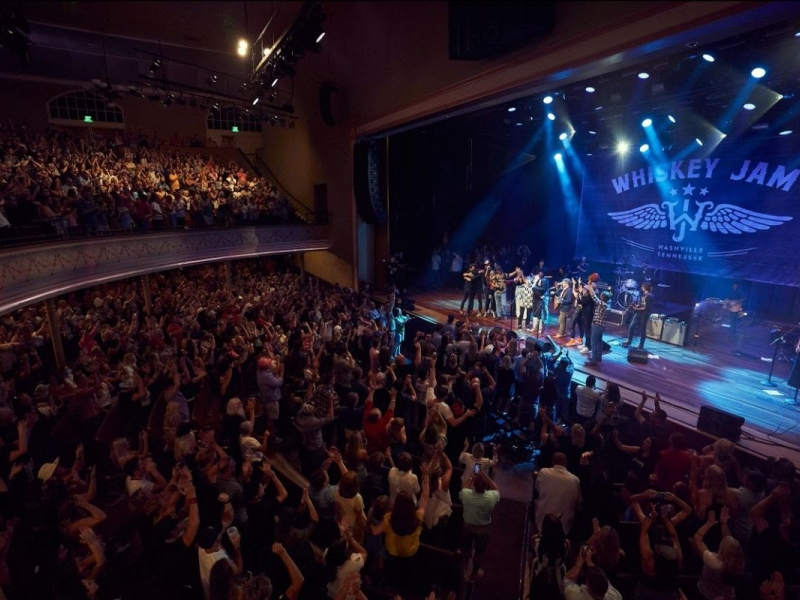 NASHVILLE, Tenn. – Boasting more than 500 Monday nights, 750+ live events, over 1 million in attendance and 2,250 performances by the artists and songwriters behind 300 No. 1 songs, 75+ ACM Awards, 50 CMA Awards and 25 GRAMMY Awards, Nashville’s hottest ongoing concert series Whiskey Jam, established January 2011, celebrated its 10th anniversary last night. With an incredible night of music on a Monday– as is its tradition – the concert event packed the historic Ryman Auditorium for an unforgettable night with an entire line-up of surprise performances.

“We started Whiskey Jam over 10 years ago because the guitar-pull set-up felt stale to try and repeat. We’re fortunate to already have places like The Bluebird Café and The Grand Ole Opry, rooms like the Listening Room and Exit/In, however if you’re not able to draw a crowd to those places yet, there really wasn’t a spot that had a built-in audience of music fans each week. As songwriters, we just needed a place to get up, jam, fail or fly and then have a drink immediately after to talk or laugh about it,” offers Ward Guenther. “It’s crazy to think that this system based on the currency of time and paying it forward has carried on for 10 years as the crowds invest in the artists on their way up and get to see them when they’re huge stars and vice versa. We are so grateful for this community,” said the Apple Music Radio host before concluding, “we can’t wait to see how this grows in the next 10, and if last night was any indication, the artist community is ready!”

Attracting artists of all genres and backgrounds, at varying stages of their career, Whiskey Jam has seen artists including Chris Stapleton, Kacey Musgraves, Maren Morris, Kane Brown, Sam Hunt, Luke Combs, Melissa Etheridge, Jelly Roll and OneRepublic make their debut. Combs shares this of the series, “I still remember when I first played Whiskey Jam. I had overheard a guy ask Ward – when he was still bartending at Tin Roof – about how to be booked, and Ward gave him his email. The next day I emailed Ward pretending to be that guy, and that’s how I booked my first Whiskey Jam show!”

Ahead of the sold-out show at the Ryman Auditorium, Billboard called Whiskey Jam “a can’t-miss event in Nashville’s music scene,” noting Monday night’s “feat is impressive given that no talent lineup has been announced in advance.”

Proceeds from the Ryman show benefit the newly-established 501©3 Jam Fam Foundation, created to support organizations that assist musicians, songwriters and the creative community when in need. “When the tornados hit, Chris Young and Whiskey Jam helped donate over 10,000 bottles of water to the communities hit the hardest and many of those folks were fans or participants of our series,” adds Guenther. “Over the course of 10 years, we’ve grown as a community-based event and so it’s only natural that we create an avenue in which to give back.”

Artist support, appreciation and praise for the concert series was evident throughout the night with Frankie Ballard noting “Whiskey Jam changed the game,” and Ernest adding “last night was one for the books.”

The Ryman celebration concluded in true Whiskey Jam tradition: introducing fans to their next one to watch as Katie Ohh took the stage to perform “This Little Light of Mine.”

Afterward, an emotional Guenther thanked the sold-out crowd who had stayed on their feet the majority of the night: “We love you Jam Fam, this has been a night we’ll remember forever. Thank you for trusting us tonight like you have the last 10 years, here’s to the next 10!”

And with that, another Whiskey Jam is in the books.

Whiskey Jam takes place every Monday & Thursday night at 8 p.m. at Winners Nashville. New In Town is on Tuesdays and focuses on writers/artists who have been in Nashville a year or less.

For images throughout the years, visit HERE. Courtesy of Whiskey Jam.