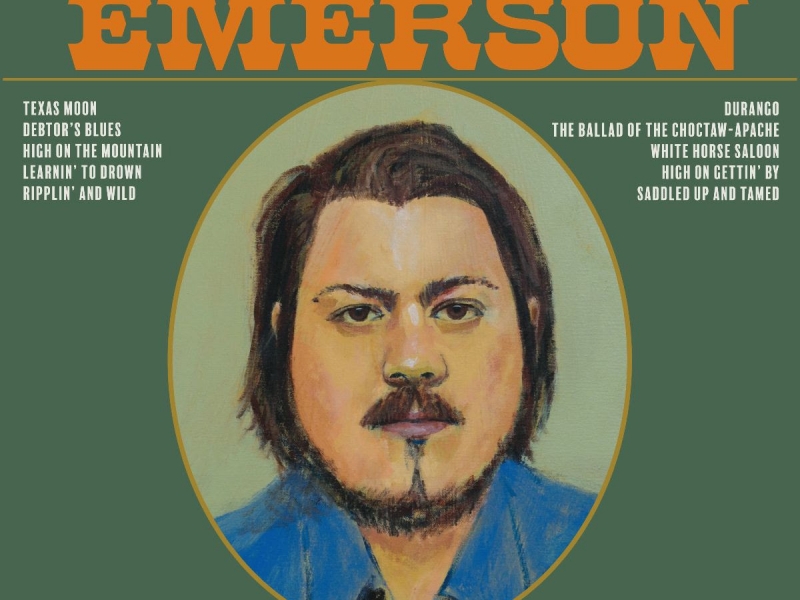 Praised by The Dallas Observer as “capable of handling all the funny, fraught and fantastic elements of the genre,” East Texas singer/songwriter Vincent Neil Emerson releases his self-titled album, dubbed by Texas Monthly as “a thrilling continuation of the raw, revelatory Texas troubadour tradition,” via La Honda Records / Thirty Tigers. Listen to the album HERE.

“I sat down over quarantine trying to make a compilation of old folk and traditional songs, and I set out to make a traditional album. But as I was learning these old songs, it just crept inside of my songwriting, and I started writing more in that vein of traditional folk music. Just, my version of it I guess, you know?” observes Emerson. “And with a lot of these tunes, they’re based around the songs more so than the production. Not to take away from the production, but this is very much a songwriter record.”

Produced by Rodney Crowell, the album features 10 tracks, all written by solely by Emerson at his home in Fort Worth. “I got drawn into this project as a producer because I was immediately drawn to the poetry of the songs that Vincent writes,” shares Crowell. “When I heard Vincent’s songs, I said, ‘I get this. I understand it. I want to be a part of this.’ It’s really exciting to me that there’s another generation coming up with the sensibilities of really good, strong language and a respect for the tradition of poetic folk-singing and songwriting.”

“I’ve sat with these songs by myself for a long time now,” Emerson shared with Sound and Soul. “You don’t know what it’s like until you take the training wheels off and try it for the first time in front of an audience. With music, everything is so subjective and what’s good to someone might be bad to someone else. It’s all up to your personal taste.

“But at the end of the day, when it comes to songwriting, I think everyone who’s a fan of real songwriting, even if they might not like the style of music, they can appreciate the honesty,” he continues. “That’s the place that I was comin’ from was trying to write really honest songs and meaningful songs. Songs that mean a lot to me.”

In a review exceeding 800 words, Texas Monthly praises Emerson’s songwriting, sharing, “The material is no less lacerating for his approach. The sweet lines of fiddle and dobro behind his lyrics can feel wrapped in razor wire. His clear, resonant voice, lined with the weight of his experience, is as likely to break your heart as bring a smile to your lips.”

After becoming more versed in traditional sounds, Emerson leaned effortlessly into bluegrass on “High On The Mountain,” a rollicking, toe-tappin’ tune featuring a jaunty jam session with his backing players.

“I wanted to make a bluegrass-style song. But I’m from Texas, and we don’t really have a whole lot of bluegrass history as far as Texas music goes,” Emerson shares. “I was really inspired by a fella named Justin Townes Earle who came out with a record called Harlem River Blues, and the title track is very jovial and upbeat. But, you know, it’s about suicide.

“I wanted to make ‘High On The Mountain’ sound like a happy song, but I have some real lyrics in there – some sad – and a lot of bluegrass songs have that element to them. I’m not an escapist by any means, but the song is like unpacking a lot of problems, and with the chorus it’s finding a way to escape that for a minute,” he concludes.

Previously released songs featured on Vincent Neil Emerson include  “Learnin’ To Drown,” praised by BroBible as “just a little bit of Western Swing flavor added to Texas Troubadour styling that nestles right into your sensibilities as an old soul;” album opener “Texas Moon,” admired by MusicRow as “an enchanting bluegrassy blend of rippling acoustic guitars, fiddle and banjo;” and “High On Gettin’ By,” lauded as “masterful” by Uncut.

Allowing himself to be open and reveal some of the most intimate details of his life was a scary yet freeing prospect for Emerson, which proved the Texas-native to be a relatable and authentic torchbearer of the Texas songwriter tradition, earning placement on nearly 15 prominent playlists, including Spotify’s flagship Americana playlist, Indigo, Emerging Americana, Fresh Folk and Apple Music’s Best New Songs.