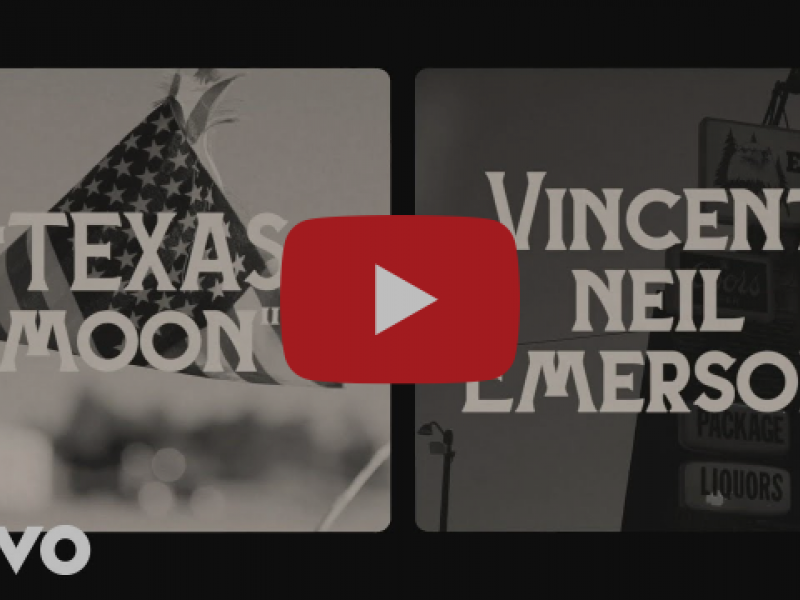 On the heels of the announcement of his self-titled sophomore album arriving June 25 via La Honda Records/Thirty Tigers, Vincent Neil Emerson releases opening track “Texas Moon,” an all-too-real ode about looking forward to returning home from the road, but always having the itch to get back on tour once you’re back, built upon a robust bluegrass arrangement of fiddle, accordion and acoustic guitar.

“I originally wanted it to be a sad, fingerpicking, folk song,” shares Emerson. “And when we got in the studio, Rodney [Crowell] suggested we should pick up the tempo a little bit on it, and I think it turned out pretty good.”

In the studio, Emerson tracked with masterful session players who brought all the sounds he envisioned for the album to life: from country to bluegrass to folk to western swing. “Because of them, we were able to get some of these songs in one take,” the Texas-native says.

“Texas Moon” is one of 10 songs penned by Emerson during an intense and productive period of songwriting, the demos of which caught the attention of Texas legend Rodney Crowell, who signed on to produce and record the LP Vincent Neil Emerson, available for pre-order HERE.

“If he grows on the public the way he’s grown on me, it’s possible young Vincent will plant the flag of his [songwriting] forebears firmly in the consciousness of a whole new generation,” shares Crowell.

“Rodney is a hero of mine,” says Emerson. “He wanted to make something that serves the songs, as opposed to making a record trying to put focus on production or the playing. It was an honor to work with him.”

Today’s release follows “Learnin’ To Drown,” a raw and devastating song Emerson wrote to confront his feelings about his father’s suicide.

“I had been trying to write a song about my father's passing for a while,” Emerson says. “I was just having a hard time processing that emotionally. Before I was always trying to find a way to kind of dance around it and not really give too much away. But there's no beating around the bush here.”

Allowing himself to be open and reveal some of the most intimate details of his life was a scary yet freeing prospect for Emerson, which proved the Texas-native to be a relatable and authentic torchbearer of the Texas songwriter tradition, with “Learnin’ To Drown” earning a spot on Spotify’s flagship Americana playlist, Indigo, Emerging Americana, Fresh Folk and Apple Music’s Best New Songs.