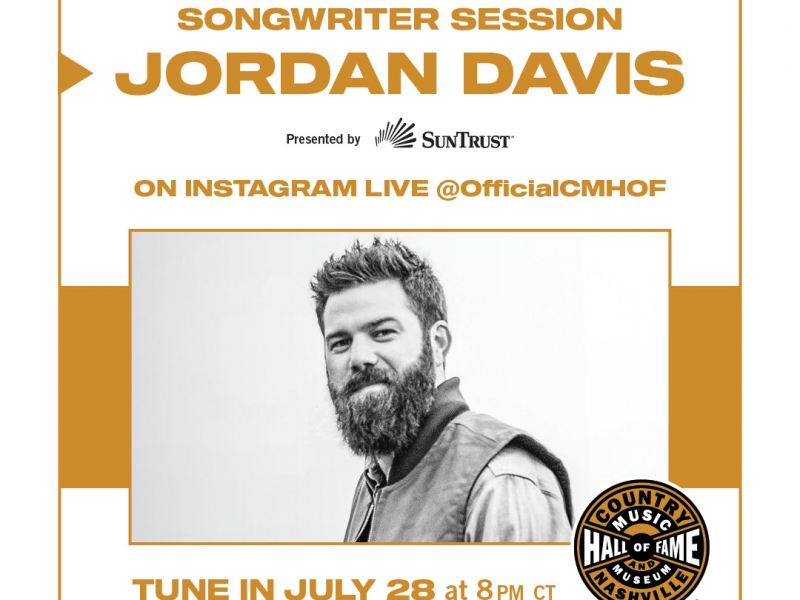 2020 ACM Best New Male Artist of the Year nominee Jordan Davis is set to join the latest installment of the Country Music Hall of Fame and Museum's Songwriter Sessions tonight, at 8 pm CDT via the museum's Instagram Live. Davis will be sharing stories and songs from his latest self-titled EP with museum Senior Director, Producer, and Writer, Peter Cooper. A spinoff of the museum’s popular Saturday Songwriter Session, offered weekly in the museum’s Ford Theater, the museum has been bringing the program to fans via Instagram Live during the COVID-19 pandemic.With the many changes the Shreveport native has experienced since moving to Music City, Davis and Cooper will have much to discuss. From signing a record deal with MCA Nashville to racking up over one billion streams of his debut album Home State and notching three consecutive No. 1s, one thing has remained constant for the breakthrough hitmaker, his love for the craft of songwriting. That passion drives his latest project, a six-song, self-titled EP released earlier this summer featuring latest single “Almost Maybes” which Billboard calls “a sure contender for song of the summer.” Listen to the EP HERE.
Teaming once again with Home State producer Paul DiGiovanni, Davis delivers the catchy hooks and sing-a-longs that have become his signature with tracks like “Almost Maybes,” written with songwriting heavy weights Jesse Frasure and Hillary Lindsey, and the lighthearted “Ruin My Weekend.” But American Songwriter  says he "rips pages from the book of John Prine" describing him as, “the kind of high-wire act always balancing between commercial viability and lyrical splendor.” He goes deeper with the personal “Detours” and spiritual “Church In A Chevy,” a song that feels more timely in the face of the worldwide COVID-19 pandemic.
The six-song collection includes latest single “Almost Maybes,” critically acclaimed “Detours” and recent collaboration with pop superstar Julia Michaels, “Cool Anymore.” Check out the pair's recent "live from home" performance of the song HERE.

For additional information, visit jordandavisofficial.com. Follow Jordan on Instagram, Twitter, and Facebook.
About Jordan Davis
MCA Nashville’s Jordan Davis has been named an “Artist to Watch” by Billboard, Rolling Stone, CMT, Pandora, Shazam, Amazon Music, Sounds Like Nashville, The Tennessean, SiriusXM, Whiskey Riff, and more. A Native of Shreveport, Louisiana, Davis graduated from LSU and briefly pursued the path of his degree working as an environmental consultant; however, his passion for music and songwriting eventually compelled him to move to Nashville in the summer of 2012. The 2020 ACM New Male Artist of the Year nominee’s debut album Home State has accumulated over 1 billion streams worldwide and features his three consecutive No. 1 hits “Slow Dance In A Parking Lot,” the Double Platinum-Certified “Singles You Up” and Platinum-Certified “Take It From Me.” In 2019 Davis won Best New Country Artist at the iHeart Radio Music Awards and was a nominee for ACM New Male Artist of the Year. He was also named Billboard’s Top New Country Artist of 2018 as well as Country Aircheck/Mediabase’s Most Heard New Artist of 2018. The hitmaker recently released a six-song, self-titled EP featuring current single “Almost Maybes” which Billboard calls “a sure contender for song of the summer” as well as the critically acclaimed “Detours,” a recent collaboration with pop superstar Julia Michaels, “Cool Anymore” and three never-before-heard tracks. The singer/songwriter has previously toured with the likes of Rascal Flatts, Jake Owen, Kip Moore, Brett Young and Old Dominion and earlier this year headlined his Trouble Town Tour hitting over 20 cities. For additional information, visit www.jordandavisofficial.com.