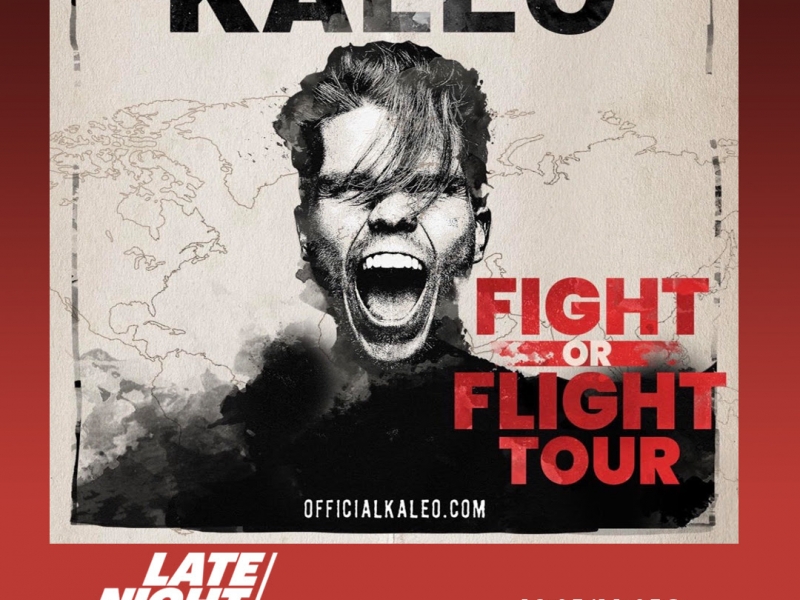 Following the announcement of their 2021 Fight or Flight Tour, GRAMMY-nominated Elektra/Atlantic recording artists KALEO will appear on NBC’s “Late Night With Seth Meyers” on Tuesday, July 14 at 11:35 p.m. CT, with frontman and songwriter JJ Julius Son performing one of two lead singles, “Break My Baby” from upcoming album Surface Sounds.

The Icelandic rock band released the two singles earlier this year, showcasing the contrast in sounds and imagery expected on Surface Sounds. Praised by Texas Monthly as a “tender-yet-tough anthem,” “I Want More” is contrasted with “Break My Baby,” which allows a look into the darker side of KALEO and is described by Loudwire as “hooky and groovy, showcasing the range of [Julius Son’s] vocal and a gritty, bluesy approach.” Upon the announcement of Surface Sounds, KALEO released a third track “Alter Ego,” which Julius Son calls “probably the most classic rock and roll song” on the album, followed by the brooding ballad “Backbone” in April.

Last month, KALEO announced their Fight or Flight Tour has moved to 2021. Launching in San Francisco on April 15, 2021, the band is set to perform at venues across North America including The Novo in Los Angeles, Terminal 5 in New York, The Anthem in Washington, D.C., Ryman Auditorium in Nashville and many more through July 19. Tickets are available for purchase HERE.

In addition to their upcoming performance, KALEO is also featured in the new Giorgio Armani Acqua di Giò Profondo fragrance campaign starring Aleksander Rusić with their chart-topping 2x Platinum-certified “Way Down We Go” from 2016’s Gold-certified breakthrough A/B. The ad features Rusić leaping into the ocean and swimming in the sea set to the track that has been used in over two dozen television shows and topped The Hollywood Reporter’s Top TV Songs Chart.

A/B spawned two hit singles for KALEO in addition to “Way Down We Go” – the GRAMMY-nominated “No Good” and the Gold-selling “All The Pretty Girls.”