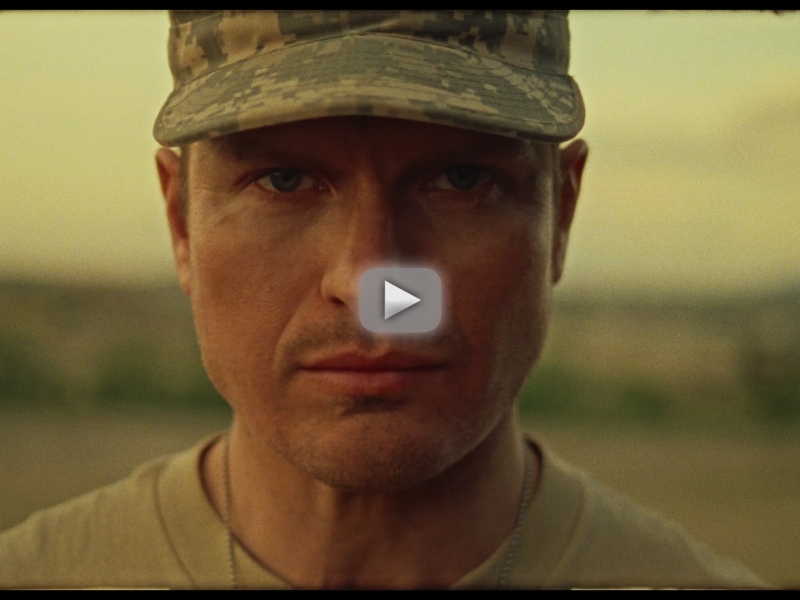 As the nation prepares for a celebration of independence this weekend, Whiskey Myers offer a powerful tribute to those who fight to keep us free via the official music video for “Bury My Bones” directed by Evan Kaufmann. Watch the video, which premiered exclusively with American Songwriter, HERE.

The emotionally-charged video, a short film shot in Texas and New Mexico, introduces a U.S. Army sergeant seemingly accompanied by his brother – both by blood and in arms – with scenes alternating between their childhood, their journey through basic training and into combat overseas, and their return home from war. With a narrative chronicling the sergeant’s all-too-real struggle with grief and post-traumatic stress disorder (PTSD), viewers see him battling bursts of aggression and a dependency on alcohol and pills as he attempts to self-medicate through the trauma.

As the video concludes and the soldier heads off to the location of their childhood adventures with a shovel in hand, it becomes clear that not only is he grappling with the horrors of combat, but he is also mourning the loss of his brother who never actually made it home alive. In the background, Whiskey Myers’ words echo the heavy emotion of the moment; “If I die young, write my mother / Tell her that I love her / But my souls gone home / And take my vessel to Anderson County / Drive real slow and take the long way home / Tell my kin to pick up a shovel / Wrestle that sugar sand and bury my bones.”

“I wrote these lyrics when we were in the middle of a long run of shows in Europe and it felt like we might never get back home,” notes guitarist John Jeffers. “It’s really powerful and humbling to see those same words translated to our American heroes and to have such a meaningful visual to accompany this song. We can’t thank our men and women in uniform enough for what they do.”

“Most of us will never really understand what these people go through, fighting to protect our country and the ideals of freedom,” reflects lead singer Cody Cannon. “It’s an honor to be able to shine a light on their sacrifices with this video, especially as we celebrate living in the land of the free this weekend. Thank you to all of our service members for everything you do.”

“Bury My Bones,” currently a Top 5 single at Texas radio, is featured on the band’s latest album, WHISKEY MYERS, which debuted atop both the Country and Americana/Folk charts with its September 2019 release, also landing at No. 2 on the Rock chart and No. 6 on the all-genre Billboard 200.

Renowned for their high-energy live shows, the band praised by Esquire as “the real damn deal” has continued to push boundaries on what a concert can look like during the ongoing pandemic, streaming live from Billy Bob’s Texas to 20,000+ and performing two sold-out shows to a sea of vehicles at the recent Texas Rangers “Concert In Your Car” series. Whiskey Myers will also host their personally curated Firewater Music Festival, a three-day camping and outdoor activity experience, this October just outside Kansas City. Tickets are on sale now at www.FirewaterMusicFestival.com.

About Whiskey Myers
Genre-bending band Whiskey Myers have played nearly 2,500 live shows since their emergence in 2007 and have sold out 95% of their headlining shows over the past two years to ever-increasing crowds. Their self-produced fifth studio album, WHISKEY MYERS, out now on the band’s own Wiggy Thump Records, debuted atop the Country and Americana/Folk sales charts, at No. 2 on the Rock chart and No. 6 on the all-genre Billboard 200 chart. The self-titled project follows their previous album, Mud, which reached No. 1 on the iTunes country chart with single “Stone” hitting Top 10 all genre. USA Today describes the band led by frontman Cody Cannon as “a riff-heavy blend of Southern rock and gritty country that has earned comparisons to the Allman Brothers Band and Led Zeppelin,” with Rolling Stone noting “it’s the seminal combination of twang and crunchy rock & roll guitars that hits a perfect sweet spot.” The band known for their high-energy live show and unique sound has also earned sync success with features (and an appearance) in Paramount Network’s Kevin Costner hit show “Yellowstone” as well as the Renée Zellweger-led Netflix series “What/If.”