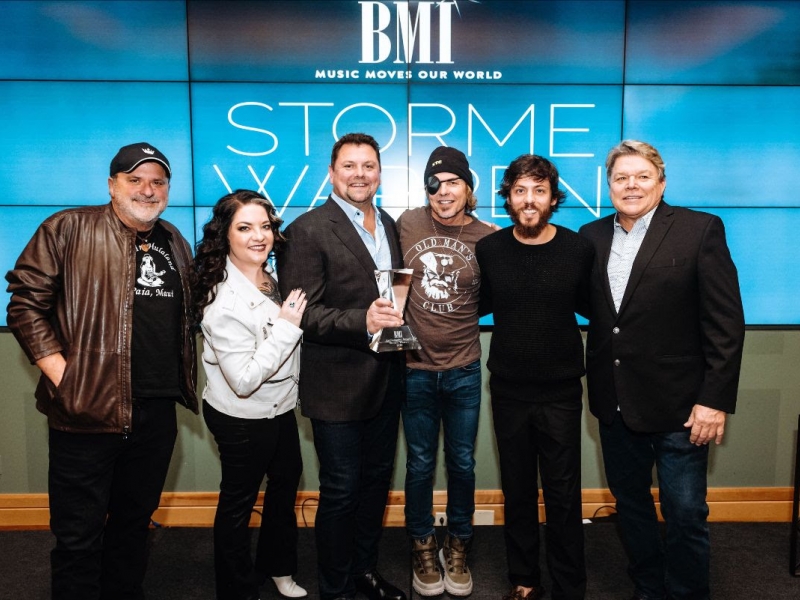 “We are excited to celebrate a very special and unique 25 year relationship between BMI and Storme Warren, who has consistently and fiercely spotlighted the magical force that makes this community so special... the songwriter,“ said David Preston, Senior Director, Creative, Nashville. “As Storme’s career evolved from presenting GAC’s Headline Country to becoming the host of the popular The Highway morning show on Sirius XM, one thing has remained constant: his unwavering love of songwriters and the ability to highlight their talent.”

Warren, who has actively supported BMI since 1993, has played a critical role in the success of various BMI events and initiatives, and has used his platform as a forum for songwriters to publicly highlight their craft while providing an outlet for fans to hear the stories behind their favorite hits. The event featured comments by BMI’s Preston, along with BMI Icon Bob DiPiero and BMI songwriters Chris Janson and Ashley McBryde. The evening also included a speech and special performance of Rascal Flatts “Every Day” by former BMI Songwriter of the Year Jeffrey Steele.

“Before anyone else was on board, Storme was on board,” said Ashley McBryde, reigning ACM and CMA New Artist of the Year. “He is the best interviewer that I’ve ever heard, and I’m proud to call him a friend.”

“Songwriters put into words what we can’t. It’s impossible to imagine living life without what you all do for a living,” said Warren in his acceptance speech. “To all of you who are here, to BMI, and to my team, thank you for this friendship. Whether you’ve written 500 songs or you’re still struggling to write your first one, please don’t stop writing because your stories make up our book and I don’t want our book to end.”

A twenty-six-year veteran of the Nashville music industry, Storme Warren is known as the “Dick Clark of Country Music.” Celebrating his 36th year in broadcasting this year, listeners can hear Warren daily on the SiriusXM’s The Highway. Acting as the channel’s morning show host, Warren is responsible for the Hot 30 Countdown and conducts Prime Country interview specials. In addition to hosting numerous events for BMI and their affiliates, Warren can also be found hosting numerous high-profile events in Music City and around the globe, including Nashville’s annual Independence Day and New Year’s Eve celebrations, as well as music festivals all over North America, the Caribbean and Australia. His television credits as host and contributing talent include TNN's “TNN Country News,” CNN's “Showbiz Today,” and GAC & CMC's “Country Music Across America” and “Headline Country.” Behind the scenes, Warren runs Stone Beaver Productions, a full-service video production company, which has created numerous live and recorded television concert events, DVDs, and specials, including Charlie Daniels’ Band CDB DVD Live and Vince Gill: Live at the Ryman. He is a proud member of the Nashville music community, serves on the Board of Directors for the T.J. Martell Foundation for Cancer Research, and works closely with the Make-A-Wish Foundation, as well as The Journey Home Project.

About BMI
Celebrating over 80 years of service to songwriters, composers, music publishers and businesses, Broadcast Music, Inc.® (BMI®) is a global leader in music rights management, serving as an advocate for the value of music. BMI represents the public performance rights in over 15 million musical works created and owned by more than one million songwriters, composers, and music publishers. The Company negotiates music license agreements and distributes the fees it generates as royalties to its affiliated writers and publishers when their songs are performed in public. In 1939, BMI created a groundbreaking open-door policy becoming the only performing rights organization to welcome and represent the creators of blues, jazz, country, and American roots music. Today, the musical compositions in BMI’s repertoire, from chart toppers to perennial favorites, span all genres of music and are consistently among the most-performed hits of the year. For additional information and the latest BMI news, visit bmi.com, follow us on Twitter @BMI or stay connected through Broadcast Music, Inc.‘s Facebook page. Sign up for BMI’s The Weekly™ and receive our e-newsletter every week to stay up to date on all things music.