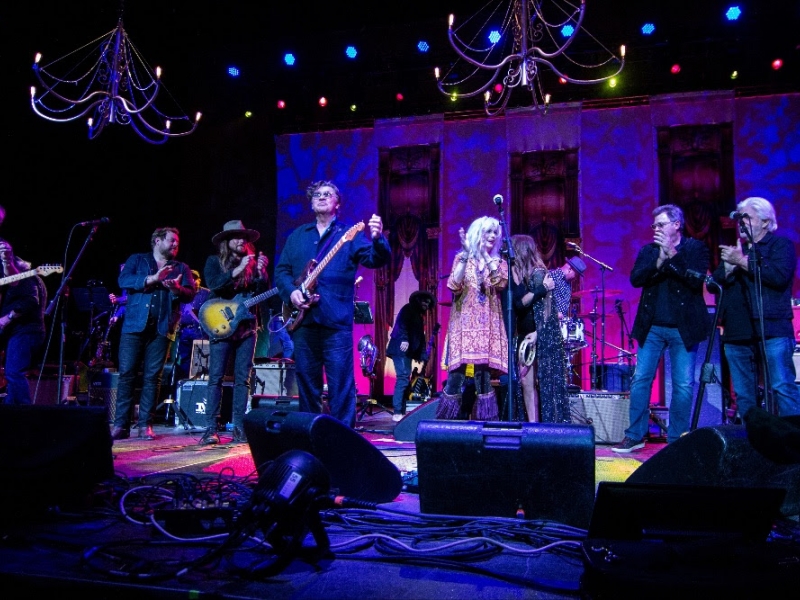 Saturday night, Nov. 23, Blackbird Presents and Live Nation brought The Last Waltz Nashville: An All-Star Celebration of The Band’s Historic Farewell Concert to Nashville’s Bridgestone Arena with the Tennessean proclaiming, “The Last Waltz lives on.” For four memorable hours attendees experienced an evening of music filled with some of music’s biggest stars and 28 timeless songs.

Warren Haynes, Jamey Johnson and Lukas Nelson kicked the first half of the evening off with “Up on Cripple Creek” and “Stage Fright.” The first set also featured performances from Cyril Neville and Dave Malone singing “Down South New Orleans” and “This Wheel’s on Fire.” Later Johnson was joined by Nathaniel Rateliff to close out the first part of the evening with the legendary “The Night They Drove Old Dixie Down” priming a rowdy Bridgestone arena for more.

Following a brief intermission Margo Price started act two with an emotional heartfelt cover of “Tears of Rage.” The second half of the night included memorable performances by Darius Rucker with “It Makes No Difference,” Bob Margolin with “Mannish Boy” and Michael McDonald, with “Helpless” and “The Shape I’m In.” As the night neared its end Emmylou Harris took the stage to perform “Evangeline,” which was originally included in Martin Scorsese’s 1978 critically acclaimed film The Last Waltz, that documented The Band’s final concert. Harris was followed by fellow Country Music Hall of Famer Vince Gill performing “Ophelia.”

Finally, to conclude the marathon musical event, founding member and guitarist/vocalist for The Band, Robbie Robertson, took the stage to perform “The Weight” before being joined by the all-star cast performing “I Shall Be Released.” Robertson later returned for an encore performance joining Nelson, Johnson and Haynes to close out the night with “Don’t Do It.” Robbie Robertson’s appearance marked his first live performance since 2013.

In keeping with the tradition of The Last Waltz, Blackbird Presents partnered with Second Harvest Food Bank of Middle Tennessee for an on-site food drive with concert attendees bringing non-perishable food items. In addition to Second Harvest, a portion of show proceeds also benefitted Farm Aid and Thistle Farms.

Over forty years ago, The Band performed their final concert to a sold-out crowd with a who’s who of Rock 'n’ Roll royalty in attendance. “As far as farewells go, this one was major,” stated Rolling Stone in a 2016 expose about the famed concert. The evening culminated with “Don’t Do It,” The Band’s cover of Marvin Gaye’s “Baby Don’t You Do It.” After the last note, Robbie Robertson, The Bands’ lead guitarist, songwriter and a founding member, said "Goodnight. Goodbye." walking off stage, forever immortalizing this epic event.

The Last Waltz Tour: An All-Star Celebration of The Band’s Historic Farewell Concert is an extension of Blackbird Present’s November 2019 Last Waltz Tour and the acclaimed 2016 two-night, sold-out concert event The Last Waltz New Orleans and 2017’s The Last Waltz 40th Anniversary Tour which was praised by audiences and critics across the country.