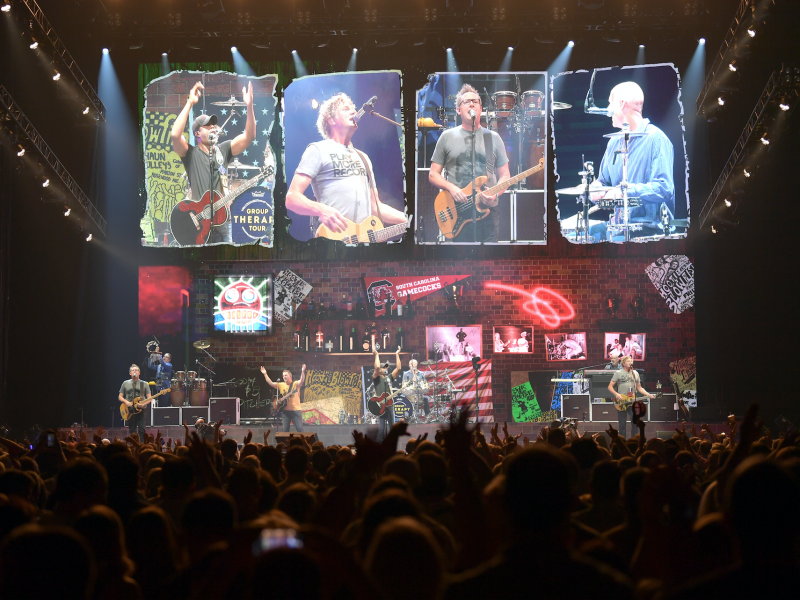 Twenty-eight years after performing their first Nashville show at the revered rock club Exit/In, Hootie & The Blowfish brought their Group Therapy Tour to the city’s Bridgestone Arena for a sold-out show Saturday night. The trek coincides with the 25th anniversary of the band’s breakthrough album, Cracked Rear View, now certified 21-times Platinum, and the crowd was on their feet throughout the night singing along to the album’s classic songs “Hold My Hand” and “Time” before raising their lit-up cell phones for the GRAMMY Award-winning ballad, “Let Her Cry.” The show also included Hootie & The Blowfish’s new track, “Rollin’,” from their upcoming studio album, Imperfect Circle, due out November 1. Lead singer Darius Rucker’s solo country hits “Alright” and “Wagon Wheel” dotted the setlist along with Hootie fan favorites “Running From an Angel” and “I Go Blind.” Rucker called R.E.M. “the band that made us want to play music” before paying tribute to them with a cover of “Losing My Religion.” Towards the end of the night, Hootie welcomed show openers Barenaked Ladies onstage for a cover of The Beatles’ “I Get By with a Little Help from my Friends.”  For the encore, the band treated fans to an intimate performance of “Goodbye” before bringing the energy back up with a little bit of Kool & the Gang’s “Get Down on It” mixed into their final song, “Only Wanna Be With You.” Hootie & The Blowfish’s Group Therapy Tour continues with a three-night stand in the band’s hometown of Columbia, S.C. on September 11, 12 and 13 before the band takes their show to the U.K. & Ireland next month. For more information, visit www.Hootie.com, and follow on Facebook @hootieandtheblowfish, Twitter @HootieTweets and Instagram @hootieofficial.

The band remained a top draw nationwide and released five more albums for Atlantic: Fairweather Johnson, Musical Chairs, Scattered, Smothered & Covered, Hootie & The Blowfish and The Best of Hootie & The Blowfish, as well as Looking For Lucky on their own Sneaky Long Records and LIVE in Charleston, The Homegrown Concert Event DVD and CD. The band took a break from full-time touring in 2007, reuniting annually for a variety of philanthropic events while also pursuing solo projects. 2019 marked the band's first full-time touring year in over a decade as they embarked on the Group Therapy Tour ahead of Imperfect Circle, their first album in nearly 15 years, due out November 1 under a new record deal with Universal Music Group Nashville.