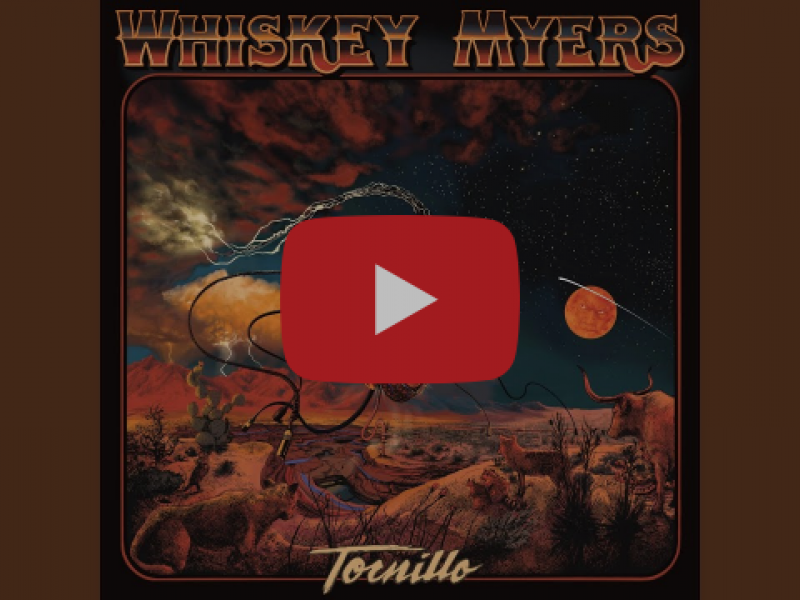 TORNILLO, Texas – As anticipation grows around Whiskey Myers’ just-announced sixth studio album Tornillo, set for release July 29 via the band’s own Wiggy Thump Records with distribution by Thirty Tigers, the group celebrated by Esquire for their “straight-up, booze-swilling, highway-driving, heart-on-your-sleeve, blood-on-your-knuckles country music” is back with even more new music upon today’s release of “Antioch.”Carrying forward the horns and gospel-tinged background vocals first introduced with lead single “John Wayne,” which prompted MusicRow to proclaim, “The six-piece band has taken their over a decade in-the-making foundation and pushed themself to explore new sonic landscapes,” “Antioch” offers yet another peek at the music to come on this summer’s full-length project.

Written solo by lead singer Cody Cannon, the heavy lyrics paired with a pulsing rhythm and fuzzed-out vocals on the four-minute rocker chronicle a young man’s journey through life anchored by growing up in an abusive home; from joining the military to getting in trouble with the law, all as he reckons with his violent paternal heritage:

Tornillo offers the next chapter for the six-piece band that Cowboys & Indians declares is “on a course toward massive success” with Rolling Stone praising Whiskey Myers’ signature ability to “successfully blend hard rock and country twang” in a way that makes them “just as compelling, hard-rocking, and genre-crossing on record as they are onstage.”

That onstage presence will be on full display as the Tornillo Tour launches next month, running through the summer with numerous already-sold-out stops, including the band’s debut at the famed Red Rocks Amphitheater, which sold out within a day of going on sale to the public. Whiskey Myers will also make their debut at the Bonnaroo Music & Arts Festival this summer before hosting the return of their personally curated Firewater Music Festival, taking place Sept. 29 – Oct. 1 just outside Kansas City.

About Whiskey Myers
Genre-bending band Whiskey Myers have played more than 2,500 live shows to ever-increasing crowd sizes since their emergence in 2007. Their forthcoming self-produced album, Tornillo, set for release July 29, follows their self-produced fifth studio album, WHISKEY MYERS, out now on the band’s own Wiggy Thump Records. WHISKEY MYERS debuted at No. 1 on both the Country and Americana/Folk sales charts, at No. 2 on the Rock chart and No. 6 on the all-genre Billboard 200 chart (No. 3 among new releases). Their previous album, Mud, reached No. 1 on the iTunes country chart with single “Stone” hitting Top 10 all genre. In total, Whiskey Myers have sold more than 1.2 million albums and amassed over 1.5 billion streams while earning three RIAA Gold certifications. USA Today describes the band led by frontman Cody Cannon as “a riff-heavy blend of Southern rock and gritty country that has earned comparisons to the Allman Brothers Band and Led Zeppelin,” with Rolling Stone noting “it’s the seminal combination of twang and crunchy rock & roll guitars that hits a perfect sweet spot.” The band known for their high-energy live show and unique sound has also earned sync success with features (and an on-screen appearance) in Paramount Network’s Kevin Costner hit show “Yellowstone” as well as the Renée Zellweger-led Netflix series “What/If,” the Angelina Jolie film “Those Who Wish Me Dead” and hit CBS series “SEAL Team.”