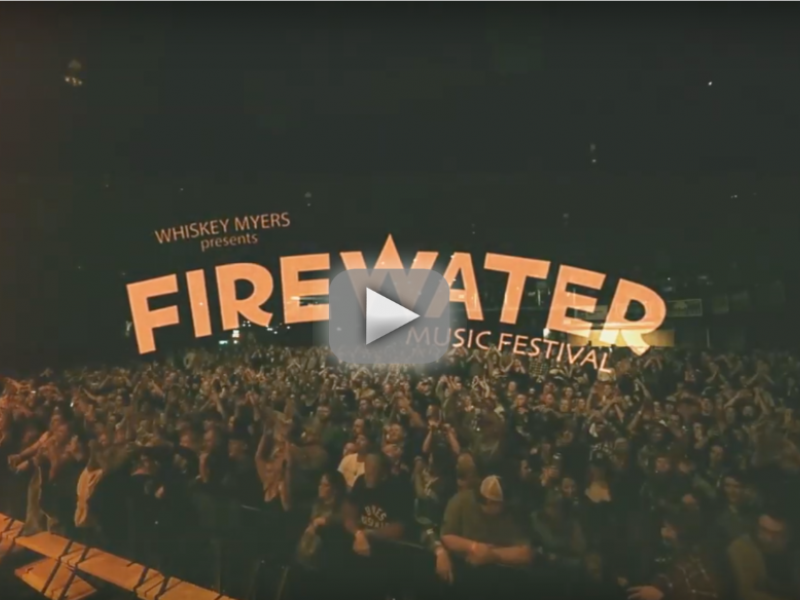 La Cygne, Kan. – Whiskey Myers are taking their live show to the next level with today’s announcement of their own curated event, Firewater Music Festival. Set for Thursday, October 1 through Saturday, October 3 just 45 minutes outside Kansas City, the event features three days of camping and outdoor activities while Friday & Saturday will be jam-packed with live music – all personally selected by the headliners declared by American Songwriter to be on an “ascent towards country rock royalty.”

Tickets to the event located on the grounds of the Wildwood Outdoor Education Center in La Cygne, Kan. (also home to Dancefestopia) go on sale this Friday, March 6, at 10 a.m. CT via www.FirewaterMusicFestival.com.

“We’ve been involved in every aspect of putting this together,” notes John Jeffers, lead guitarist of the band Rolling Stone calls the “new torchbearers of Southern music” and Esquire praises as “the real damn deal.” “From the location and the activities to the badass artists that will be joining us, we wanted to make sure this festival is 100% Whiskey Myers.”

“Firewater gives us the chance to bring all of our friends – and fans – together in one place to just hang out and enjoy some really great music,” adds frontman Cody Cannon. “It’s going to be one hell of a weekend!”

Two-day GA passes for Friday & Saturday’s concerts are priced at $124.97 and include free tent camping while the two-day VIP passes, which also include free tent camping as well as a dedicated viewing area and private bathrooms, are priced at $224.97. The two-day Super VIP pass, priced at $399.97, includes the standard VIP amenities as well as exclusive access to the Main Stage party platform with intimate views of the performances. Guests may also purchase an early entry pass for $39 to begin camping Thursday, October 1, the day before music begins.

All tickets have layaway payment plans available, and the GA and VIP tickets have discounted rates available when purchased as 4 Packs. Primitive RV sites are available as an add-on for $200.

Located just south of Kansas City, the festival will take place on 150 acres of meadows, ponds and wooded hills to offer the ultimate outdoor lifestyle experience. In addition to daily concerts, with Whiskey Myers as the marquee performance and further lineup announcements coming soon, on-site activities include canoeing, zip-lining, rock climbing, archery and a swimming pool.

About Whiskey Myers
Genre-bending band Whiskey Myers have played nearly 2,500 live shows since their emergence in 2007 and have sold out 95% of their headlining shows over the past two years to ever-increasing crowds. Their self-produced fifth studio album, WHISKEY MYERS, out now on the band’s own Wiggy Thump Records, debuted atop the Country and Americana/Folk sales charts, at No. 2 on the Rock chart and No. 6 on the all-genre Billboard 200 chart. The self-titled project follows their most recent album, Mud, which reached No. 1 on the iTunes country chart with single “Stone” hitting Top 10 all genre. USA Today describes the band led by frontman Cody Cannon as “a riff-heavy blend of Southern rock and gritty country that has earned comparisons to the Allman Brothers Band and Led Zeppelin,” with Rolling Stone noting “it’s the seminal combination of twang and crunchy rock & roll guitars that hits a perfect sweet spot.” The band has also earned sync success with features in Seasons 1 & 2 of Paramount Network’s Kevin Costner hit show “Yellowstone” as well as the Renée Zellweger-led Netflix series “What/If.” For more information, visit www.whiskeymyers.com and follow on social media @WhiskeyMyers.