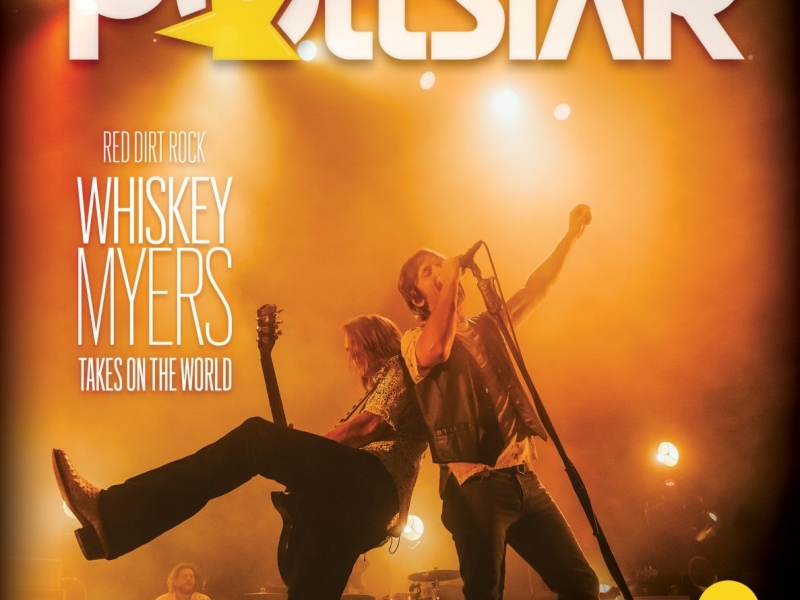 NASHVILLE, Tenn. – Road warriors Whiskey Myers have played more than 2,500 shows since their emergence in 2007, yet this year’s touring has reached yet another level for the band who earns their reputation as American Songwriter’s “Country Rock Royalty,” having sold over 281,000-and-counting tickets year to date. With recent milestones including a single-day sellout of their Red Rocks Amphitheatre debut and back-to-back nights at the Ryman Auditorium (with the second show added after night one sold out in just 30 minutes), plus a headlining arena show in front of more than 10,000 fans set for Fort Worth’s Dickies Arena next month, the multi-Platinum independent band arrives emphatically as this week’s POLLSTAR cover artist, with the magazine noting, “Somewhere between the six-string swagger of Southern rock and the hard-charging improv-aspect of jam bands, Whiskey Myers ignited a national fervor for Red Dirt Music.”

In addition to their sold-out tour dates to ever-increasing crowd sizes across the globe, the band from East Texas is also keen to remember their roots, hosting the annual Wiggy Thump Festival in their hometown to benefit the local youth livestock association. Yet they began dreaming even bigger in the festival space with last year’s inaugural edition of their personally curated Firewater Music Festival held outside Kansas City, which will return with an impressive lineup of musical friends plus a wide array of outdoor lifestyle activities this week, Sept. 29 – Oct. 1. Limited tickets remain HERE.

“It’s lightning in a bottle,” lead singer Cody Cannon shared with POLLSTAR of the event and its lineup, continuing, “You know, people really seem to want real bands. And if that’s what they’re looking for, well, that’s all that we are... all we’ve really ever been.”

Live is where the band known for that authenticity and celebrated by Esquire for their “straight-up, booze-swilling, highway-driving, heart-on-your-sleeve, blood-on-your-knuckles country music” makes an undeniable impression, yet their recorded music also speaks volumes. The July release of Tornillo, recorded during a 21-day period of isolation at the Sonic Ranch studio just miles from the U.S./Mexico border, marked the band’s second time self-producing and featured the genre-bending band doubling down on what they do best: sharing honest truths with no-holds-barred instrumentation, letting the genre-bending music speak for itself.

As American Songwriter declared of Tornillo, the band is “in a league of their own with their signature hard-rocking sound on full display… Saddle up and settle in because Whiskey Myers is ready to take listeners on a country, rock, and blues-infused wild ride.” “Southern rock is alive and well on Whiskey Myers’ Tornillo – and it comes with a brassy border-town swagger,” added Nashville Lifestyles in the magazine’s July print issue. “Equal parts train songs, tenacious energy, and Tabasco… their lawless musicality burns like the sun.”

Whether recorded or live, it’s clear that what Classic Rock declares of Whiskey Myers has never been truer: “Authenticity: you can’t buy it, you can’t bluff it. And you can’t beat it when it comes to delivering dirty, down-home, electric guitar music from the American South.”

For more information and to purchase tickets to upcoming shows, visit www.whiskeymyers.com and follow on social media @WhiskeyMyers.

About Whiskey Myers
Genre-bending band Whiskey Myers have played more than 2,500 live shows to ever-increasing crowd sizes since their emergence in 2007. In addition to headlining their own sold-out shows from coast to coast at iconic venues such as Red Rocks Amphitheater and Ryman Auditorium, plus performing at marquee festivals Bonnaroo, Stagecoach, Download and more, the six-piece was also personally selected to open The Rolling Stones’ Chicago stadium show in 2019. Their latest self-produced album, Tornillo, available everywhere now via the band’s own Wiggy Thump Records, follows their fifth studio album, Whiskey Myers, which debuted at No. 1 on both the Country and Americana/Folk sales charts, at No. 2 on the Rock chart and No. 6 on the all-genre Billboard 200 chart (No. 3 among new releases). In total, Whiskey Myers have sold more than 1.4 million albums and amassed nearly 2 billion streams while earning four RIAA Gold & Platinum certifications as an independent band. Known for their high-energy live show and unique sound, the band praised by Esquire as “the real damn deal” has also earned sync success with features (and an on-screen appearance) in Paramount’s hit show “Yellowstone” as well as Netflix series “What/If,” Angelina Jolie film “Those Who Wish Me Dead” and hit CBS series “SEAL Team.” USA Today describes their sound as “a riff-heavy blend of Southern rock and gritty country that has earned comparisons to the Allman Brothers Band and Led Zeppelin,” with Rolling Stone noting “it’s the seminal combination of twang and crunchy rock & roll guitars that hits a perfect sweet spot.”