WHISKEY MYERS IS A COMIN’ TOUR SET FOR EARLY 2022 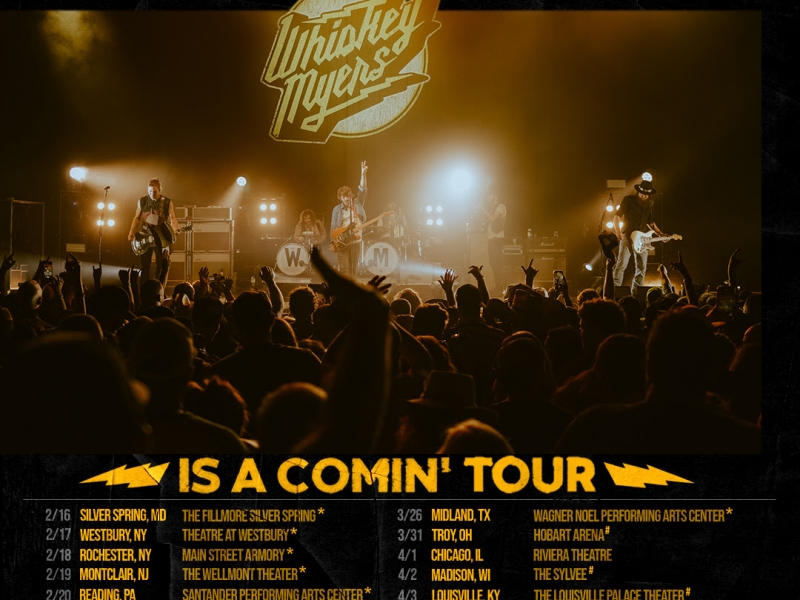 NASHVILLE, Tenn. – For genre-bending band Whiskey Myers, 2019’s self-titled and self-produced album offered a watershed moment. With Rolling Stone raving that the “irresistible” album was “the record the band was poised to make” while declaring them “the new torch bearers for Southern music” and American Songwriter celebrating the band’s “ascent towards Country Rock royalty;” Billboard and No Depression naming the album to best-of-the-year lists; 41,000 first week album sales; and the project debuting atop both the Country and Americana album charts (as well as at No. 2 on the Rock charts, behind only a re-release of The Beatles’ Abbey Road), the band celebrated mainstream success a decade in the making.

Some bands may find that a tough moment to follow. Not Whiskey Myers. Less than two years removed from the hugely successful release, they once again returned to the Sonic Ranch studio deep in the heart of their native Texas, just miles from the U.S./Mexico border, already brimming over with more to say. The Gold-certified renegades doubled down on what they do best: sharing honest truths with no-holds-barred instrumentation, letting the self-produced music speak for itself.

As they put the finishing touches on the project born from 21 days isolated at the 2,300-acre recording complex surrounded by pecan orchards and eye an early 2022 release date via their own Wiggy Thump Records with distribution by Thirty Tigers, Whiskey Myers also continue to grow their road-tested live show with newly announced plans for the Whiskey Myers Is A Comin’ Tour launching in February.

With 21 headlining dates across the U.S. and support from Drake White and Read Southall Band, the unbridled return to the touring world that has been home to the road warriors for 14 years builds on the growing success of consistently sold-out shows, including a career-high audience of 8,800 fans in Irving, Texas and back-to-back nights at the iconic Ryman Auditorium in Nashville, Tenn., both earlier this year.

Tickets to all dates are on sale to the general public this Friday, Nov. 19 via WhiskeyMyers.com, with presale access available for members of the “Official Whiskey Myers Fans” Facebook page and newsletter subscribers beginning tomorrow, Nov. 16 at 10 a.m. local time. Additionally, Spotify will give the band’s biggest fans on the platform early access beginning Wednesday, Nov 17. at 10 a.m. local time.

For the most up-to-date information on the forthcoming album and all tour dates, visit www.WhiskeyMyers.com and follow on social media @WhiskeyMyers.

About Whiskey Myers
Genre-bending band Whiskey Myers have played more than 2,500 live shows to ever-increasing crowd sizes since their emergence in 2007. Their self-produced fifth studio album, WHISKEY MYERS, out now on the band’s own Wiggy Thump Records, debuted at No. 1 on both the Country and Americana/Folk sales charts, at No. 2 on the Rock chart and No. 6 on the all-genre Billboard 200 chart. The self-titled project follows their previous album, Mud, which reached No. 1 on the iTunes country chart with single “Stone” hitting Top 10 all genre. In total, Whiskey Myers have sold more than 1.1 million albums and amassed over 1.3 billion streams while earning three RIAA Gold certifications. USA Today describes the band led by frontman Cody Cannon as “a riff-heavy blend of Southern rock and gritty country that has earned comparisons to the Allman Brothers Band and Led Zeppelin,” with Rolling Stone noting “it’s the seminal combination of twang and crunchy rock & roll guitars that hits a perfect sweet spot.” The band known for their high-energy live show and unique sound has also earned sync success with features (and an on-screen appearance) in Paramount Network’s Kevin Costner hit show “Yellowstone” as well as the Renée Zellweger-led Netflix series “What/If,” the Angelina Jolie film “Those Who Wish Me Dead” and hit CBS series “SEAL Team.”

About Drake White
Drake White grew up singing in his church’s youth choir in Alabama before becoming one of Country music’s most spirited innovators, earning four Top 40 hits and traveling the country on multiple nationwide tours. His 2013 debut single “Simple Life” introduced his brand of Country soul, which he cemented with 2016 debut album Spark followed by the EPs Pieces and Stars.  In August 2019, he collapsed on stage due to a hemorrhagic stroke, and doctors told him he might never perform again. After undergoing a series of operations to repair his Arteriovenous Malformation (AVM) and months of physiotherapy, White has proved them wrong, embarking on his headlining The Optimistic Tour to spread his incredible positivity to his fans. New songs “Power of a Woman” and “Giants” are the latest tastes of new music from White, who has received accolades including Rolling Stone’s “10 Country Artists You Need to Know,” The GRAMMYs’ “Artist of Tomorrow” and the British CMA Awards for International Song of the Year. He has shared the bill with Country music superstars Luke Bryan, Eric Church and Zac Brown Band. For more information, visit www.DrakeWhite.com.

About Read Southall Band
A very isolating 2020 needed shifts in musical direction to get to a place where new music, let alone the Read Southall Band’s crowning achievement, could even exist. Their third studio album, For the Birds, is ambitious and captures vigorous, rock ‘n’ roll energy with elements of country and southern rock. From classic to contemporary rock, these are songs that could appeal to the disparate fanbases of Gary Stewart, Joe Walsh, Rival Sons or Chris Cornell. American Songwriter called For The Birds “exploratory... traversing through uncharted sonic territory” and Raised Rowdyproclaims, “There is a ton of excitement building around Read Southall Band at the moment.” Riff Magazine notes, “Read Southall Band combines the heavy guitars of the late- and post-grunge era with southern rock vocals and a country music sensibility to create a sound outside the expectations of any of those genres by themselves.” Southall and his bandmates understand that the album’s long gestation and their sonic shifts may take some adjustment for fans. But that excited uncertainty is reflected in the new album’s title. “We came up with For the Birds because it’s been so long and we were worried that nobody’s waiting for us,” says Southall. “So maybe this record is ‘for the birds.’ If you like it, you like it. It is what it is. For us, it’s six individuals making tunes.” For more information, visit www.ReadSouthall.com.