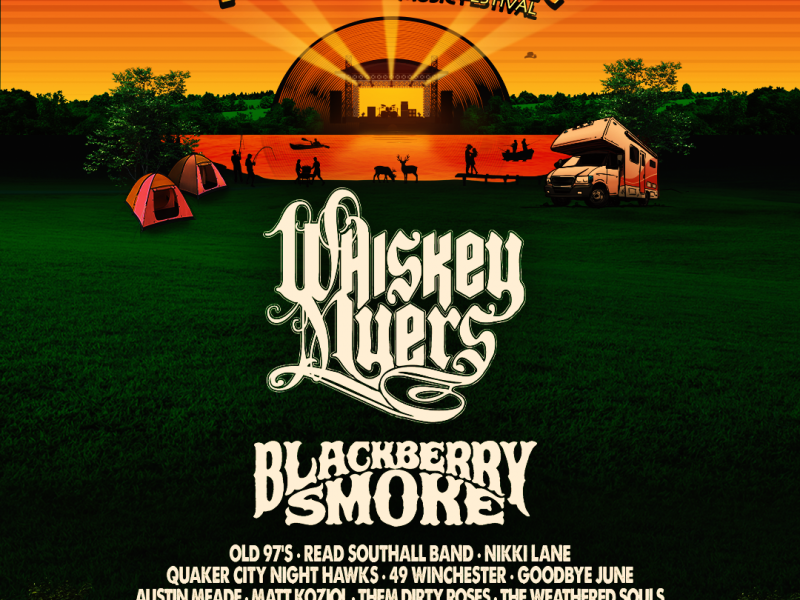 LA CYGNE, Kan. – With American Songwriter proclaiming of their forthcoming Tornillo album (available July 29), “Whiskey Myers [is] in a league of their own with their signature hard-rocking sound on full display,” fans of the multi-Platinum band have even more to look forward to with today’s announcement of the Thursday night pre-party lineup for their personally-curated Firewater Music Festival.

With just over two months until Firewater takes over the outskirts of Kansas City for a second year, Steven Bankey & The Flatlanders, Eli Howard & The Greater Good, Matt Poss Band and Clay Clear Band have been added to perform exclusively for Thursday early entry passholders at what was a fan-favorite event during last year’s inaugural festival.

In addition to the pre-party, the festival will also feature two performances from Whiskey Myers throughout the weekend as well as sets by a who’s who of artists straddling the lines of Country, Rock and Americana. With the festival returning for its second year, the highly anticipated lineup features Blackberry Smoke, Old 97’s, Read Southall Band, Nikki Lane, Quaker City Night Hawks, 49 Winchester, Goodbye June, Austin Meade, Matt Koziol, Them Dirty Rosesand The Weathered Souls.

“We were just thinking about ‘what do we want to do here? Who do we get to play?’,” front man Cody Cannon shared with Outsider of curating the inaugural lineup in 2021. “Then at the end of the day, it’s like, we just need to get our friends. Our favorite bands around are the people that we’re friends with. So, all those people on there, man, we just think the world of them… we’re very thankful to be able to put that together and just have all our friends at the same place at once.”

In addition to a reunion of musical friends on stage, the festival located on 150 acres of meadows, ponds and wooded hills will offer the ultimate outdoor lifestyle experience for fans with the live concerts supplemented by on-site activities include canoeing, zip-lining, rock climbing and a swimming pool.

Two-day GA passes for Friday & Saturday’s concerts are priced at $144 and include free tent camping while two-day VIP passes, which also include free tent camping as well as a dedicated viewing area and private bathrooms, are priced at $244. Two-day Super VIP passes, priced at $499, include the standard VIP amenities as well as exclusive access to a viewing deck with optimal views of the performances. Guests may also purchase an early entry pass for $39 to begin camping Thursday, Sept. 29 and to attend the exclusive pre-party concert. Primitive RV sites are available as an add-on for $200. All tickets are on sale now with monthly payment plans available.

For more information about the event and to purchase passes, visit FirewaterMusicFestival.com and stay tuned on Facebook @FirewaterFestival, Instagram @Firewater_Festival and Twitter @Firewater. For more information on all things Whiskey Myers, visit www.whiskeymyers.com and follow on social media @WhiskeyMyers.

About Whiskey Myers
Genre-bending band Whiskey Myers have played more than 2,500 live shows to ever-increasing crowd sizes since their emergence in 2007. In addition to headlining their own sold-out shows from coast to coast and performing at marquee festivals Bonnaroo, Stagecoach, Download and more, the six-piece was also personally selected to open The Rolling Stones’ Chicago stadium show in 2019. Their forthcoming self-produced album, Tornillo, set for release July 29, follows their fifth studio album, Whiskey Myers, out now on the band’s own Wiggy Thump Records, which debuted at No. 1 on both the Country and Americana/Folk sales charts, at No. 2 on the Rock chart and No. 6 on the all-genre Billboard 200 chart (No. 3 among new releases). In total, Whiskey Myers have sold more than 1.3 million albums and amassed over 1.8 billion streams while earning four RIAA Gold & Platinum certifications. The band known for their high-energy live show and unique sound has also earned sync success with features (and an on-screen appearance) in Paramount Network’s hit show “Yellowstone” as well as the Renée Zellweger-led Netflix series “What/If,” the Angelina Jolie film “Those Who Wish Me Dead” and hit CBS series “SEAL Team.” USA Today describes their sound as “a riff-heavy blend of Southern rock and gritty country that has earned comparisons to the Allman Brothers Band and Led Zeppelin,” with Rolling Stone noting “it’s the seminal combination of twang and crunchy rock & roll guitars that hits a perfect sweet spot.”