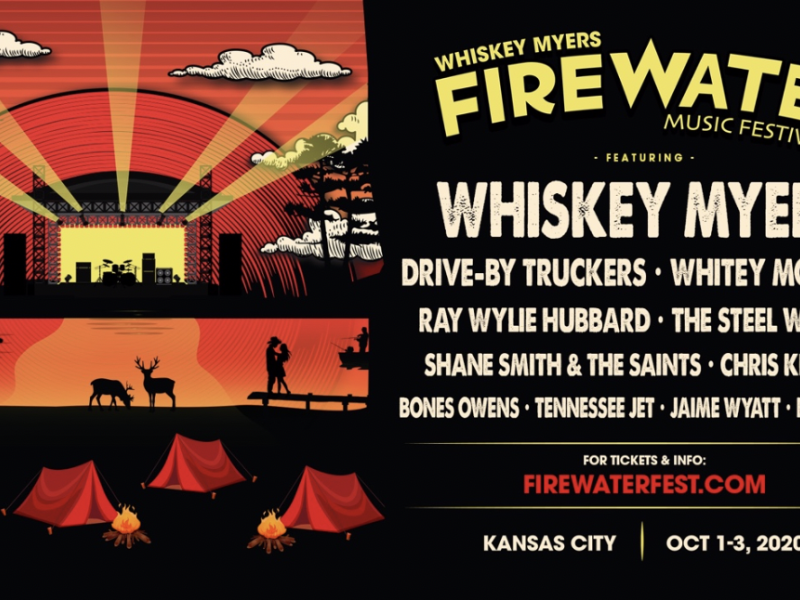 As Whiskey Myers continue to push boundaries on what a concert can look like during the ongoing pandemic, streaming live from Billy Bob’s Texas to 20,000+ and performing to a sea of vehicles at the recent Texas Rangers “Concert In Your Car,” they also look ahead to a full festival experience this fall with today’s announcement of the highly-anticipated lineup for their personally-curated Firewater Music Festival.

Working in tandem with state and local government, event organizers are taking extra precautions based on guidance from health authorities including the CDC to ensure that the three-day event will be safe for attendees. For more information on specific adjustments being made, visit www.firewatermusicfestival.com/covid-19.

Located just south of Kansas City, the festival will take place on 150 acres of meadows, ponds and wooded hills to offer the ultimate outdoor lifestyle experience. In addition to the live concerts, on-site activities include canoeing, zip-lining, rock climbing, archery and a swimming pool.

Two-day GA passes for Friday & Saturday’s concerts are priced at $124.97 and include free tent camping while the two-day VIP passes, which also include free tent camping as well as a dedicated viewing area and private bathrooms, are priced at $224.97. The two-day Super VIP pass, priced at $399.97, includes the standard VIP amenities as well as exclusive access to the Main Stage party platform with intimate views of the performances. Guests may also purchase an early entry pass for $39 to begin camping Thursday, October 1, the day before music begins.

All tickets are on sale now with layaway payment plans available, and the GA and VIP tickets have discounted rates available when purchased as 4 Packs. Primitive RV sites are available as an add-on for $200.

About Whiskey Myers
Genre-bending band Whiskey Myers have played nearly 2,500 live shows since their emergence in 2007 and have sold out 95% of their headlining shows over the past two years to ever-increasing crowds. Their self-produced fifth studio album, WHISKEY MYERS, out now on the band’s own Wiggy Thump Records, debuted atop the Country and Americana/Folk sales charts, at No. 2 on the Rock chart and No. 6 on the all-genre Billboard 200 chart. The self-titled project follows Mud, which reached No. 1 on the iTunes country chart with single “Stone” hitting Top 10 all genre. USA Today describes the band led by frontman Cody Cannon’s raspy drawl as “a riff-heavy blend of Southern rock and gritty country that has earned comparisons to the Allman Brothers Band and Led Zeppelin,” with Rolling Stone noting “it’s the seminal combination of twang and crunchy rock & roll guitars that hits a perfect sweet spot.” The band has also earned sync success with features in Seasons 1 & 2 of Paramount Network’s Kevin Costner hit show “Yellowstone” as well as the Renée Zellweger-led Netflix series “What/If.” For more information, visit www.whiskeymyers.com and follow on social media @WhiskeyMyers.