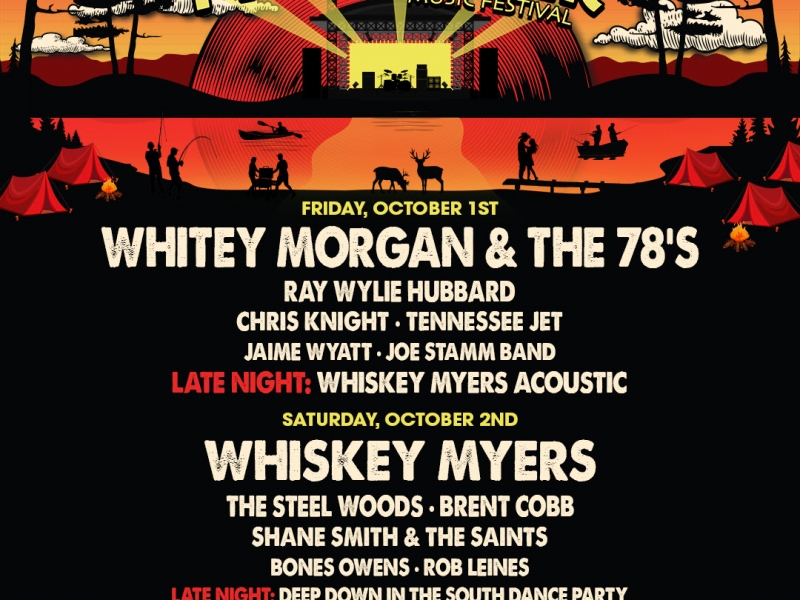 La Cygne, Kan. – In the midst of a rousing return to the road, Whiskey Myers have announced the daily lineup for their personally curated Firewater Music Festival this fall, as the band praised by Rolling Stone as “the new torch bearers for Southern music” continues what American Songwriter celebrates as an “ascent towards Country Rock royalty.”

Friday, October 1 will feature a headlining performance by Whitey Morgan and the 78’s as well as sets by Ray Wylie Hubbard, Chris Knight, Tennessee Jet, Jaime Wyatt and Joe Stamm Band, plus a late-night special full band acoustic performance by Whiskey Myers themselves.

The hosts will headline Saturday, October 2 with a full production set, along with performances by The Steel Woods, Brent Cobb, Shane Smith & The Saints, Bones Owens and Rob Leines, with a late-night Deep Down in the South Dance Party to close out the weekend.

Located just south of Kansas City, the festival sits on 150 acres of meadows, ponds and wooded hills to offer the ultimate outdoor lifestyle experience with tent and RV camping available for an all-encompassing weekend. In addition to the live concerts at both the Main Stage and the Emerald Forest Stage, a secluded hotspot nestled amid the woodland tent camping sites, on-site activities range from ziplining with a bird’s eye view of the action and rock wall climbing to fishing and canoeing on the Emerald Pond, as well as a weekend-long pool party (add on pass required).

Tickets are on sale now HERE along with various camping and festival experience add ons. Two-day GA passes for Friday & Saturday’s concerts are priced at $134.97 and include free tent camping, while the two-day VIP passes, which also include free tent camping as well as a dedicated viewing area and private bathrooms, are priced at $234.97. The two-day Super VIP pass, priced at $449, includes the standard VIP amenities as well as exclusive access to the Main Stage party platform with intimate views of the performances. Single day admission for Friday and Saturday performances is also available for $124.97 (GA) or $224.97 (VIP). Guests may also purchase an early entry pass for $39 to begin camping Thursday, September 30, the day before music begins. All tickets are on sale now with layaway payment plans available until next Thursday, July 15.

About Whiskey Myers
Genre-bending band Whiskey Myers have played more than 2,500 live shows since their emergence in 2007 and sold out 95% of their headlining shows during the most recent year of touring to ever-increasing crowds. Their self-produced fifth studio album, WHISKEY MYERS, out now on the band’s own Wiggy Thump Records, debuted at No. 1 on both the Country and Americana/Folk sales charts, at No. 2 on the Rock chart and No. 6 on the all-genre Billboard 200 chart. The self-titled project follows their previous album, Mud, which reached No. 1 on the iTunes country chart with single “Stone” hitting Top 10 all genre. In total, Whiskey Myers have sold more than a million albums and amassed over 1.2 billion streams. USA Today describes the band led by front man Cody Cannon as “a riff-heavy blend of Southern rock and gritty country that has earned comparisons to the Allman Brothers Band and Led Zeppelin,” with Rolling Stone noting “it’s the seminal combination of twang and crunchy rock & roll guitars that hits a perfect sweet spot.” The band known for their high-energy live show and unique sound has also earned sync success with features (and an appearance) in Paramount Network’s Kevin Costner hit show “Yellowstone” as well as songs in the Renée Zellweger-led Netflix series “What/If,” the Angelina Jolie film “Those Who Wish Me Dead” and hit CBS series “SEAL Team.” For more information, visit www.whiskeymyers.com and follow on social media @WhiskeyMyers.