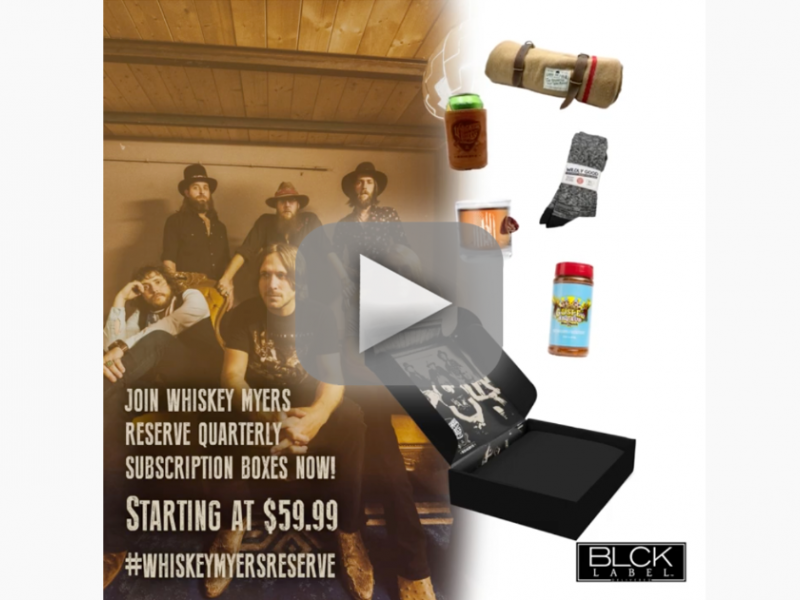 NASHVILLE, Tenn. – In the midst of a sold-out run of shows connecting with audiences across the country, Whiskey Myers announce a brand new way for fans to engage with the band via the “Whiskey Myers Reserve” quarterly subscription box, featuring hand-picked and custom-made items that reflect the group’s authentic roots and relaxed appreciation for the simple things in life, available for pre-order now at www.WhiskeyMyers.blcklabel.com.

“We have the best fans in the world, and we’ve always been impressed by how eager they are for ways to connect with us and with each other,” reflects front man Cody Cannon. “We’re excited to share some of our favorite items with the fans and to give them a new way to keep enjoying the Wiggy lifestyle at home between shows.”

Delivered quarterly beginning September 2021, fans will receive a mix of unique products personally selected and curated by the band in partnership with BLCK Label, LLC – designed with tailgating pre-show in mind or for just settling in at home with a great Whiskey Myers record playing in the background.

About Whiskey Myers
Genre-bending band Whiskey Myers have played more than 2,500 live shows since their emergence in 2007 and sold out 95% of their headlining shows during the most recent year of touring to ever-increasing crowds. Their self-produced fifth studio album, WHISKEY MYERS, out now on the band’s own Wiggy Thump Records, debuted at No. 1 on both the Country and Americana/Folk sales charts, at No. 2 on the Rock chart and No. 6 on the all-genre Billboard 200 chart. The self-titled project follows their previous album, Mud, which reached No. 1 on the iTunes country chart with single “Stone” hitting Top 10 all genre. In total, Whiskey Myers have sold nearly a million albums and amassed more than a billion streams. USA Today describes the band led by frontman Cody Cannon as “a riff-heavy blend of Southern rock and gritty country that has earned comparisons to the Allman Brothers Band and Led Zeppelin,” with Rolling Stone noting “it’s the seminal combination of twang and crunchy rock & roll guitars that hits a perfect sweet spot.” The band known for their high-energy live show and unique sound has also earned sync success with features (and an appearance) in Paramount Network’s Kevin Costner hit show “Yellowstone” as well as the Renée Zellweger-led Netflix series “What/If,” the Angelina Jolie film “Those Who Wish Me Dead” and hit CBS series “SEAL Team.” For more information, visit www.whiskeymyers.com and follow on social media @WhiskeyMyers.

About BLCK Label, LLC
BLCK Label, LLC was founded with connection in mind. From the creators of the wildly successful outdoor and survivalist subscription company BattlBox, alongside music industry and marketing experts, BLCK Label oversees black labeling product design and development to delivery and everything in between. For more information, visit BLCKLabel.com.