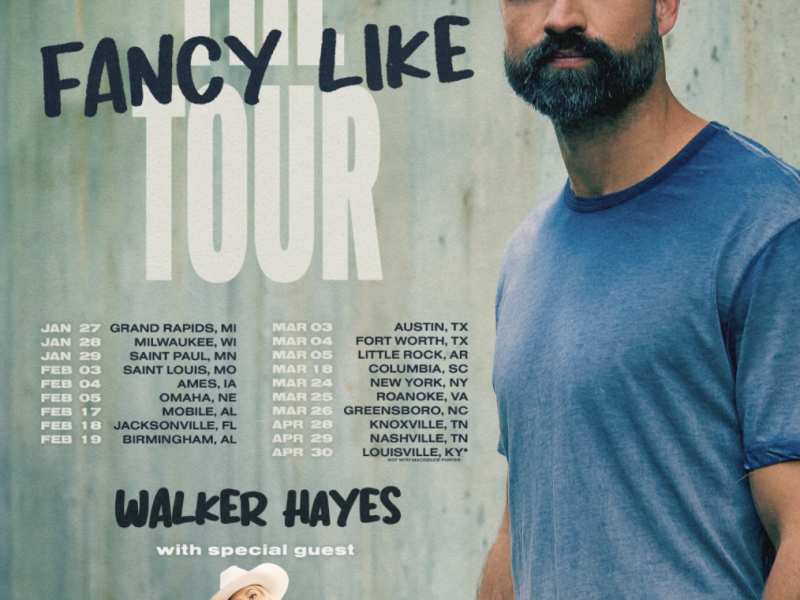 NASHVILLE, Tenn. – Walker Hayes announces the on sale of his new tour – The Fancy Like Tour. The track that made history when it jumped from #17 into the top 10 at country radio, making it the biggest jump into the Top Ten on the Mediabase Country chart in 17 years, now has a tour behind it.

Following his smash hit, “Fancy Like,” and new release, “U Gurl,” Hayes sets out on a headlining tour that will bring his music to fans across the country. With special guest Mackenzie Porter, the tour will kick off in Grand Rapids, MI on January 27.

“It has been so fun to watch everyone react to ‘Fancy Like,’ from Tik Tok, to Country Radio, to Pop Radio. I can’t wait to finally hit the road and play it live for the fans who have made it so big,” says Hayes. “After almost two years with no shows, it feels so good to get back up on stage and see you all in person.”

“Fancy Like” has been atop every country streaming and sales chart since its release in June. The track has spent a whopping sixteen weeks, and counting, at the number one spot on Billboard's Hot Country Songs, is among the top 5 on Billboard’s Hot 100 Songs, top 5 at Country Radio, and top 5 at Pop Radio.

Written in response to fans thinking his life was more lavish than it actually was, “Fancy Like” has taken Hayes to audiences across the globe, spawning collaborations with Kesha and Carin Leon, television appearances, and iHeart festival slots, and has become one of the fastest certified Platinum singles of 2021. Stereogum calls the track “the biggest country crossover hit of 2021” and the TODAY Show called it “the song of the summer.”

For the first time since its release, Hayes will bring “Fancy Like,” plus his extensive catalogue including the RIAA Double-Platinum hit “You Broke Up With Me,” beloved “Don’t Let Her,” and fan favorites “Craig,” “Country Stuff,” and “90s Country,” to stages near you. Hayes’ fun, autobiographical, and incessantly catchy, song keep fans coming back for more!

About Walker Hayes
Monument Records recording artist, Walker Hayes, is a singer/songwriter originally from Mobile, Alabama. His song “Fancy Like” became a smash sensation in summer 2021 thanks to a TikTok video featuring Hayes and his daughter Lela. The video has been viewed over 30 million times and been incorporated into Applebee’s ad campaign. Spending sixteen weeks at the number one spot on Billboard's Hot Country Songs, the track Recently landed in the top 5 on Billboard’s Hot 100 Songs. It is officially RIAA certified Platinum.

The proud father of six has performed his music, including the Double-Platinum RIAA certified hit “You Broke Up With Me,” to national audiences on Good Morning America, Late Night with Seth Meyers, The Tonight Show Starring Jimmy Fallon, and The TODAY Show. Hayes has joined the likes of Kelsea Ballerini, Dan + Shay, Thomas Rhett, and Old Dominion on tour, as well as headlined dates of his own.

About MacKenzie Porter
Singer-songwriter MacKenzie Porter is a rising Country talent whose sound knows no borders. Signed to Big Loud Records, Porter is surging now with headline-making “Thinking ‘Bout You” collaboration with Dustin Lynch at Country radio, plus her own DRINKIN’ SONGS: THE COLLECTION – an arsenal of two years’ worth of new music produced by Joey Moi. Since moving to Nashville in 2014 from her native Canada, she’s developed a radiant Country style which threads the needle between traditional heart and modern energy, often collaborating with songwriting mainstays like Nicolle Galyon, Craig Wiseman, Natalie Hemby, and Tommy English. Her "mesmerizing vocals and hook-driven songs" (Billboard) have sparked a list of headline-worthy accolades, including Porter’s four hard-earned 2021 CCMA Awards nominations: Entertainer of the Year, Female Artist of the Year, PRS Guitars Video of the Year (“Drinkin’ Songs”) and Fans’ Choice. Porter was also nominated for Country Album of the Year at the 2021 JUNO Awards. Making her mark, Porter became the first female artist to have three back-to-back #1 singles at Canadian Country radio in 22 years with “About You,” “These Days” and “Seeing Other People” in early 2020, following Shania Twain in 1998. Porter also earned her first crossover Top 10 at Canadian Pop radio – a first since 2003 for a Canadian Country artist – with "These Days (Remix)," and joined CMT’s elite sisterhood of tastemakers and trailblazers as one of their Next Women of Country class of 2021. Her most recent releases “Unlonely Me” and “Heaven Heard Me” are out now. The Pandora 2021 Country Artist to Watch has toured extensively on her own, also sharing stages with Kenny Chesney, Rascal Flatts, Chris Lane, Blake Shelton, Dallas Smith, and currently Jordan Davis and co-starred in the Netflix series, Travelers.