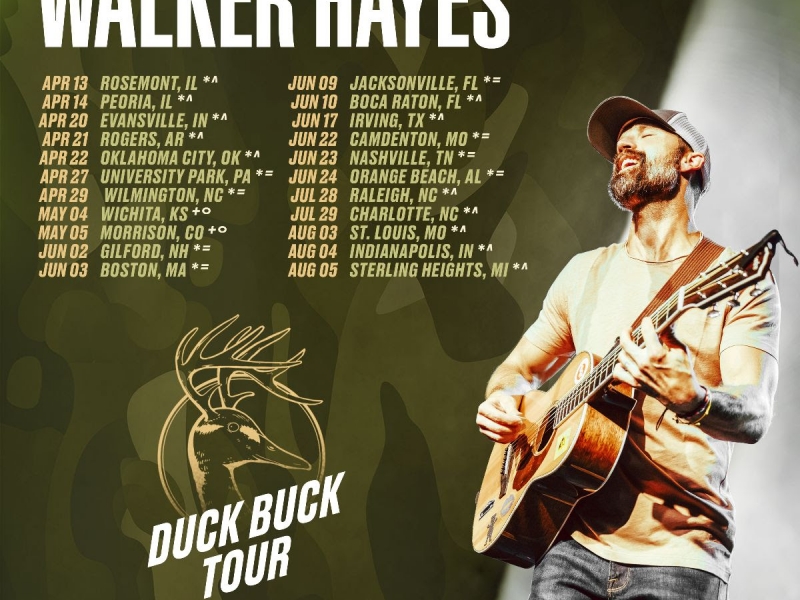 Tickets On Sale This Friday, Dec. 16

“I can’t wait to get back out on tour,” says Hayes. “Headlining an arena tour for the first time this past year was a dream come true. The whole family was able to come out and the road has become our new home away from home. All the fans that have come out or will come out are making this dream a reality. I owe it all to them, and this next tour will be the biggest and best. I don’t take for granted that they spent their hard-earned money on my shows, and I plan to make it well worth it!”

The new tour gets its name from the chorus of the title track off Hayes’ most recent album, Country Stuff The Album, in which the Mobile, AL native celebrates the trademarks of life in the country. Relishing his love of “Country Stuff,” Hayes sings, “I like shooting ducks and bucks / I like mud tires on my trucks / I like old blue jeans, guitar strings and dirt roads.” Since the release of the track, the Duck Buck has become Hayes’ signature, showing up on his merch, across his socials, and in his music videos after fans latched onto the visual. Always listening to fan feedback, the Duck Buck is now the name of Hayes’ next arena tour.

Hayes’ 2023 tour will celebrate the power of songwriting, while championing female talent with Andress joining 20 dates and Galyon performing at the legendary Red Rocks tour stop, which will also feature superstar Lane. BRELAND and Fulcher will split dates throughout the tour, showcasing some of the best country music that the genre has to offer.

One of the top streaming artists in country music last year, Hayes single “Y’all Life” is steadily climbing the charts, currently sitting in the top 30 on country radio’s Mediabase chart. His most recent release, “Face In The Crowd ,” is an ode to his biggest fan who remains side stage during many of his tour dates, his wife Laney. The song is especially meaningful after a breakthrough year for Hayes and his family that saw the superstar earn a GRAMMY nomination, six Billboard Music Award nominations, five ACM Award nominations, a CMT Award nomination, a CMA nomination and his first No. 1 at Country radio. Listen to “Face In The Crowd” HERE.

Join the Walker Hayes Fan Club to be the first to get tickets. A pre-sale for Fan Club members will be live on Dec. 13 at 10 a.m. local, through Dec. 15 at 10 p.m. Visit walkerhayes.com to join and learn more.

ABOUT WALKER HAYES:
Monument Records recording artist Walker Hayes is a singer/songwriter originally from Mobile, Alabama. Last year, his smash hit “Fancy Like” topped every country music sales and streaming chart, spent more than six months at the No. 1 spot on the Billboard Hot Country Songs Chart, hit the top 5 on Billboard’s Hot 100 Songs, hit No. 1 at country radio, and gave Hayes his first GRAMMY Award nomination as an artist for  Best Country Song. The song was also featured in a nationwide Applebee’s commercial. “Fancy Like,” as well as follow up single “AA,” both from Hayes album Country Stuff the Album, made him one of the top selling and streamed artist last year. Country Stuff the Album is the only country album released in 2022 that is RIAA certified. Currently, Hayes’s single, “Y’all Life,” is climbing the country radio charts, and his most recent release “Face In The Crowd” is an ode to his biggest fans – his wife Laney and their six children.

Hayes has performed his music, including the Double-Platinum RIAA certified hit “You Broke Up With Me,” to national audiences on Good Morning America, Late Night with Seth Meyers, The Tonight Show Starring Jimmy Fallon and TODAY, and he was profiled for CBS Sunday Morning. Last fall, he set out on his headlining arena tour, the Glad You’re Here  tour, which is the same title as the book he released with his best friend, Craig Allen Cooper, detailing his journey to finding Christ.

ABOUT INGRID ANDRESS:
4x GRAMMY nominated singer-songwriter Ingrid Andress digs deeper than ever before to explore the dark and the light within us all on her highly anticipated sophomore album, Good Person , available everywhere now. All co-produced and co-written by Andress, the track listing includes her latest platinum-certified, No. 1 radio single “Wishful Drinking (with Sam Hunt),” which is also currently GRAMMY-nominated for Best Country Duo/Group Performance. Having gone through two years that were transformational in every way and triumphing in the face of some unprecedented career-obstacles, Andress knew that the best way forward was a brave willingness to be even more truthful and real. Along the way, she also found that changes were happening in her personal life and that the songs were actually leading the way, revealing emotions she wasn’t fully aware of yet. She pushed for bold, experimental sounds that blended banjos with vocoders; swung from sweeping orchestration to spare, acoustic-based arrangements; and showcased previously unexplored parts of her vocal range.

Good Person returns to the reflection and confession at the core of her triumphant 2020 debut, Lady Like, and plumbs even deeper. Named “one of the year’s strongest albums” by Associated Press, Lady Like became one of Billboard’s Top 10 Best Country Albums of the year and set the record as the highest streaming country female debut album of all time upon release. In addition to the Gold-certified title track, Lady Like  also features her multi-platinum No. 1 radio single “More Hearts Than Mine,” which made history as the only debut single from a solo female artist to break the Top 20 on country radio in 2019. The album was up for Best Country Album at the 63rd Annual GRAMMY Awards in addition to Andress’ nominations for Best Country Song and Best New Artist, making her the only country artist to be nominated in a “Big Four” category. Recently celebrating the impressive milestone of surpassing one billion total career streams, Andress spent the summer on tour with Keith Urban for his “The Speed of Now World Tour” and recently announced her own global headlining trek, The Good Person Tour, kicking off in February 2023.

ABOUT RAY FULCHER:
As a writer, the 2022 CMA Triple Play Honoree Ray Fulcher understands the sweet spot of life. It's the same joy that marks the songs he's co-written with an old friend named Luke Combs. Eight of those songs ended up on the 2020 CMA Album of the Year What You See Is What You Get. Eight more ended up on This One's for You. Four of those songs – "When It Rains It Pours," "Even Though I'm Leaving," "Lovin' on You," and "Does to Me," featuring their mutual idol and influence Eric Church – went to #1. As an artist, Ray Fulcher has been streamed over 40 million times, and almost 21 million of those streams are derived from "Anything Like You Dance." On Jun. 10, 2022 Fulcher released his debut album Spray Painted Line, featuring the hit songs "Love Ya Son, Go Dawgs," referencing the CFP National Champions, the Georgia Bulldogs, "Girl in It," and "Anything Like You Dance."

ABOUT NICOLLE GALYON:
Nicolle Galyon is an award winning, multi-Platinum singer, songwriter and producer from Sterling, Kansas and one of Nashville’s most successful and respected voices. Adding to her already triumphant career as a songwriter, Galyon released her long-awaited debut album, firstborn, earlier this summer via her own label, Songs & Daughters. A striking personal statement, firstborn is Galyon’s life story in song form and continues to receive widespread critical attention. Of the record, The Tennessean praises, “a star-making statement all her own that reckons with her humanity and humility in equal measure,” while Variety declares, “firstborn is not aimed at giving her a tenth No. 1 but at putting her own lyrical voice in the top position for the first time in her career.”

Across her twenty-year career, Galyon has penned nine No.1 hits including Miranda Lambert’s ACM Award-winning “Automatic,” which went on to win NSAI Song of the Year, as well as and Dan + Shay’s multi-platinum, ACM Award-winning “Tequila.” Additionally, Galyon has received Grammy and CMA Awards nominations, earned a Triple Play Award and was honored by BMI as their 2019 Songwriter of the Year. In addition to her work as a songwriter and artist, Galyon founded the female-focused label and publishing house, Songs & Daughters, in 2019, which includes artists Hailey Whitters, Tiera Kennedy, Madison Kozak and Lauren Watkins. Galyon is heavily involved in the CMA Foundation’s music education initiative, has served as an NSAI Board Member, a CMT Next Women of Country mentor and founded The Autobiography Scholarship to provide students of her alma mater Sterling High School with college scholarships. She was also named 2020 Kansan of the Year for her continued service and commitment to her home state, which includes partnering with SongFarm and Save The Music to install a recording studio in Sterling High School and others throughout the country.

ABOUT CHRIS LANE:
Introducing "a decidedly more country sound" (MusicRow), Chris Lane is launching his next chapter with over 1.4 BILLION on-demand streams and three #1s to date - platinum "Big, Big Plans," 3X platinum "I Don't Know About You," and platinum "Fix." After a spree of releases in 2021 and 2022, Lane's catalog has expanded with hits like latest collaboration "Dancin' In The Moonlight" with Lauren Alaina, "Howdy," "Stop Coming Over," "Summer Job Money," "Fill Them Boots," "Ain't Even Met You Yet," HIXTAPE: Vol. 2 smash "Small Town On It" with Scotty McCreery, and Dustin Lynch duet, "Tequila On A Boat." The Kernersville, N.C. native has appeared on the Macy's Thanksgiving Day Parade, TODAY, The Bachelor, The Tonight Show Starring Jimmy Fallon, Late Night with Seth Meyers and CONAN, and was featured in PEOPLE's 2019 Sexiest Man Alive issue. He's scored nominations at the iHeartRadio Music Awards, ACM Awards, and Radio Disney Music Awards. Lane just wrapped his headlining Fill Them Boots Tour, will join Kane Brown for part of his international Drunk or Dreaming Tour this fall, after previously sharing the bill with A-list acts like Florida Georgia Line, Brad Paisley, and Dan + Shay.