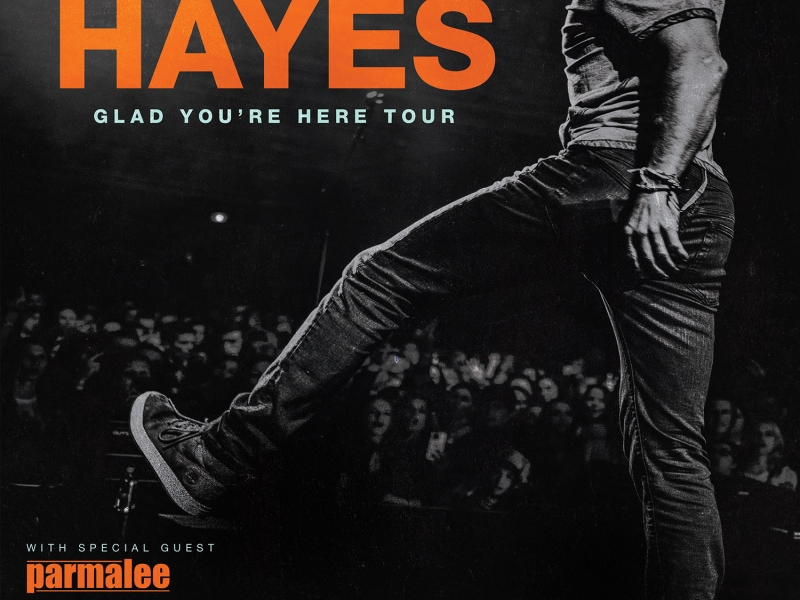 NASHVILLE, Tenn. – On the heels of a breakthrough year filled with a Grammy nomination, five ACM Award nominations, a CMT Award nomination, and just announced earlier this month six nominations for the upcoming 2022 Billboard Music Awards, Walker Hayes announces his new headlining arena tour called Glad You’re Here. The fifteen-city trek will kick off in Johnstown, PA on Sept. 29, with special guest Parmalee and marks Hayes’ first-time headlining arenas after selling out theaters across the country this spring on his 19-city The Fancy Like Tour. Pre-sale begins April 26 at 10 a.m. Local, with tickets on sale on Friday April 29 at 10 a.m. Local. Visit www.walkerhayes.com for more details.

“I can’t believe that we are playing arenas,” says Hayes. “It’s mind blowing how our team is growing, how the crowds are growing, and how the music continues to connect with my audience. I’m just so grateful.”

The new tour gets its name from another first for Hayes, his forthcoming book “Glad You’re Here” written with his best friend, Craig Allen Cooper. Craig will likely sound familiar to fans, as it’s the name of a beloved Hayes song in which he documents the day a pastor he barely knew – Craig – gifted the Hayes family a car during a time of need. It helped the family through one of their toughest moments and led Hayes down his path towards finding hope in Christ. The book is set for release May 3 – pre-order HERE.

Not even a year ago, Hayes released the smash-hit “Fancy Like” which catapulted him into super-stardom. In addition to hitting number one at country radio, the track held the number one spot on Billboard’s Hot Country Songs chart for over six months, and saw Hayes perform everywhere from the American Music Awards to the halftime show of the AFC Championship game. His follow up “AA,” is currently climbing the radio charts, holding firm on the Billboard Hot Country Songs Chart and recently found Hayes on this year’s ACM Awards and CMT Music Awards performing the hit single.

Now, Hayes takes these songs, plus his deep catalogue of fan favorites like “Don’t Let Her” and “90s Country,” and the RIAA multi-Platinum “You Broke Up With Me,” on the road for his arena headlining Glad You’re Here Tour.

ABOUT WALKER HAYES:
Monument Records recording artist, Walker Hayes, is a GRAMMY Nominated singer/songwriter originally from Mobile, Alabama. His recent album County Stuff The Album features single “AA” and smash hit “Fancy Like.” “Fancy Like” has topped every sales and streaming chart since its release, spending a collective 6 months and counting at the number one spot on Billboard’s Hot Country Songs. The song was featured in a national Applebee’s ad campaign and hit the top 5 on Billboard’s Hot 100 Songs chart.

Hayes has performed his music, including the Double-Platinum RIAA certified hit “You Broke Up With Me,” to national audiences on Good Morning America, Late Night with Seth Meyers, The Tonight Show Starring Jimmy Fallon, and the TODAY Show, and was profiled for CBS Sunday Morning.

ABOUT PARMALEE:
2016 ACM “New Vocal Duo/Group of the Year” nominee Parmalee is one of Country music’s most successful acts: the Platinum-selling band of brothers is one of only four groups since 2001 to earn three consecutive Top 10 singles from a debut Country album. Since their debut at Country radio, Parmalee has earned nearly 500 million on-demand streams. Heralded as “Country music’s most solid hitmakers” by People, Parmalee has supported Brad Paisley and Jake Owen on national tours while finding time to perform on NBC’s TODAY show, The Late Late Show, FOX & Friends All American Summer Concert Series, MLB Central’s Studio 21, The Queen Latifah Show, The Kelly Clarkson Show and more. Comprised of brothers Matt and Scott Thomas (lead vocals/guitar and drums, respectively), cousin Barry Knox (bass), and life-long friend Josh McSwain, the North Carolina natives recently returned to the top of the charts with their PLATINUM-certified international No. 1 single with Blanco Brown, “Just the Way.” Their romantic new single that “will undoubtedly make the list for wedding songs this year,” (Sounds Like Nashville) and was nominated for Best Group/Duo Video of the Year at the 2022 CMT Music Awards, “Take My Name,” from their new album, For You is in the Top 20 and climbing on Country radio now. For more information, visit: http://www.parmalee.com.

ABOUT “GLAD YOU’RE HERE” THE BOOK:
When Craig Cooper and Walker Hayes met, Walker was an alcoholic atheist reeling from the backlash of a failed music career. Through their unlikely friendship, Craig's life demonstrated the love of Christ in a way that shattered Walker's misconceptions of Christianity, ultimately leading him down the path to a dramatic life-change. The two are now close as brothers, choosing to be next-door neighbors and ripped out the fence between their homes as a testament to the power of the gospel to break down barriers and unite people together in Christ. Glad You're Here helps us discover how building relationships, sacrificing for the good of others, and drawing near in times of need can lead to powerful transformation. Through story and biblical reflections, Glad You're Here helps you see how God works in the everyday lives of those who love him.