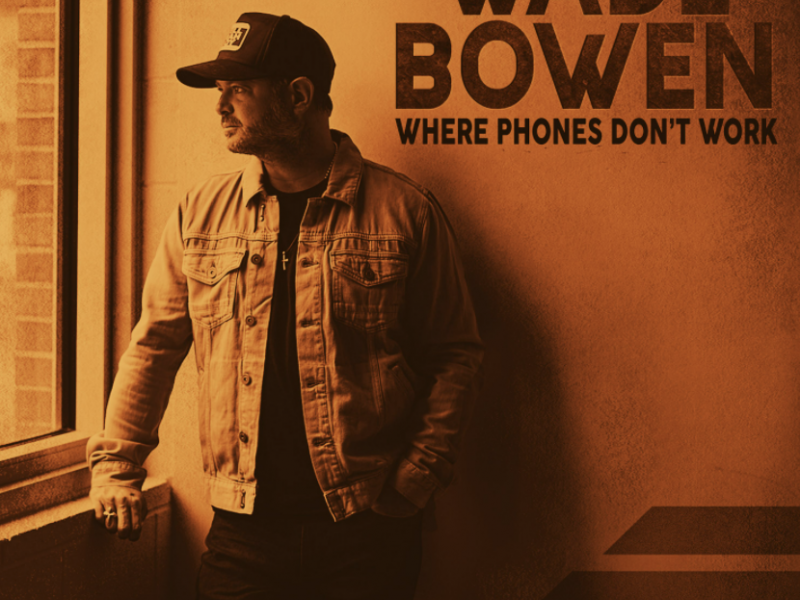 NASHVILLE, Tenn. – A longtime staple of the Texas music scene, Wade Bowen continues to prove that his music can’t be constrained by the state line with today’s release of his highly anticipated six-song EP, Where Phones Don’t Work, via Thirty Tigers and produced by Paul Moak. Listen HERE.

A dozen albums have shown Bowen’s evolution – including six studio sets, two beloved live collections, a gospel album and an ongoing series of buddy-country hits with fellow Texan, Randy Rogers – yet with each distinct piece of art his focus remains on writing unique songs with a literary quality and constantly reexamining his sonic territory to match his life, as evidenced once again on Where Phones Don’t Work, which sees Bowen as a cowriter on all six songs.

The project opens with the title track, “Phones Don’t Work,” cowritten with Aaron Raitiere and Rhett Akins, a song with a singalong quality born from Bowen’s desire to push himself to write bigger sounding sounds, with the results seemingly tailormade for a long-awaited return to live shows.

“Where We Call Home” follows, with the Brad Clawson and Jeremy Bussey cowrite marking a years-in-the-making return to Nashville songwriting sessions for Bowen and celebrating the little things that bring joy in life, from an old Waylon Jennings song to your first car. “Those things are important to me,” says Bowen of the lyrics’ nostalgic details. “Every day, we should find those little gems that bring us comfort and make us take a deep breath and appreciate what we have.”

“The Last Town in Texas,” one of two cowrites with Eric Paslay and Heather Morgan on the project,” is championed by Bowen as the song he believes in most from his entire career thus far and also marks the first time he’s namechecked his home state in a song. “I’ve always said I’m an artist from Texas, not a Texas artist,” he explains. “I’ve made it a point not to say Texas in any of my songs. This one was completely different, though, because it had to be said. I love when it’s done right and differently.”

The other Paslay/Morgan cowrite on the project, lead single “When Love Comes Around,” was awarded MusicRow’s “Disc of the Day” award upon its recent release, with Billboard also honoring the song among the best of the week, noting that “two decades into his music career, Bowen’s music retains a newcomer’s energetic fervor, melded with his signature blend of sounds from across the wide spectrum of Texas music.”

“Trouble Is” marks a bucket-list cowrite for Bowen, who wrote the track praised by Outsider as a song that “rivals some of his best work” with the legendary Steve Earle. “I was just hoping he liked me as a person – that was my goal,” notes Bowen. “To actually get a great song out of it makes it that much better.”

Closing out the project, “Be You,” written with Drew Kennedy, is what Bowen describes as “the mission statement of the entire project,” intended to lift people up after the difficulties of the past year-plus. “We decided to make this the final song on this EP because we wanted this to be the feeling people walk away with when they’re done with the project,” notes Bowen. “This song is just saying to everybody, ‘Please take a deep breath, find the good in the world and, most importantly, find the good in each other, and we’ll get back to a much better place than we are right now.”

Together, the collection marks the first solo project from Bowen in three years, with the promise of a full-length album on the horizon for 2022.

Seen as one of the genre’s finest and most genuine modern voices, Bowen’s approach stays rooted in tradition, but also stands on the creative cutting edge. His focus remains on writing unique songs with a literary quality and shifting his sonic territory to match his life, as evidenced by his uplifting new single, “When Love Comes Around,” off his forthcoming EP, Where Phones Don’t Work, available everywhere now (Thirty Tigers).