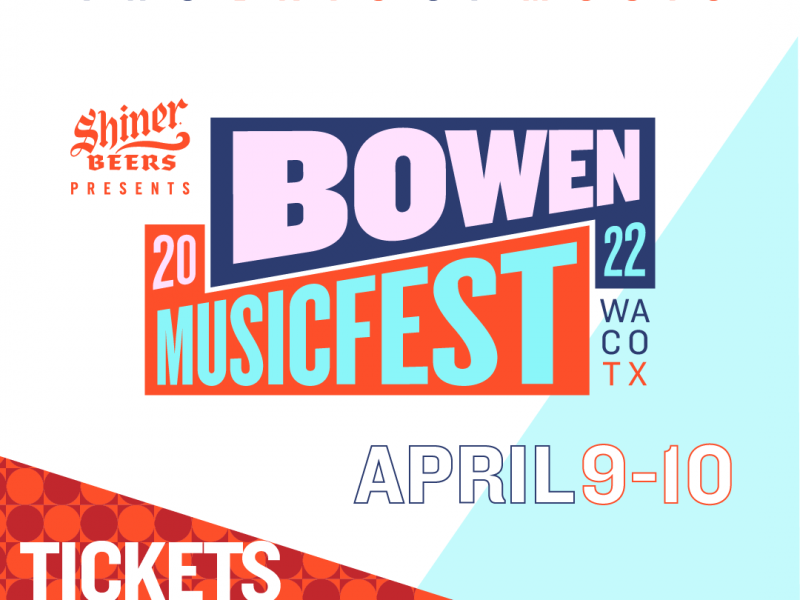 “When we launched our annual Bowen Musicfest and Bowen Classic golf tournament, I never dreamed that we’d still be at it twenty years and millions of dollars later,” reflects Bowen. “I’m so proud of the way my family, friends and hometown continue to step up with hearts and hands to help make Waco a better place. At the Bowen Family Foundation, we believe that Music Heals and I can’t wait to see the good we can do for the community with this incredible group of musicians joining us in April.”

With funds raised by the annual Bowen Musicfest, the Bowen Family Foundation has helped children and families in and around Waco via beneficiaries including March of Dimes Waco, CASA of McLennan & Hill Counties, City of West Disaster Relief, Boys & Girls Clubs of Waco, Inspiración, The Mentoring Alliance and more.

Bowen takes the stage at this year’s event with an arsenal of new music after finding a renewed sense of focus and passion over the past year-plus. “Two decades into his music career, Bowen's music retains a newcomer’s energetic fervor, melded with his signature blend of sounds from across the wide spectrum of Texas music,” praises Billboard of the musical reawakening, while MusicRow reminds us that “the perennially popular” singer/songwriter “can always be counted on for Country excellence.” Lead single “When Love Comes Around” is proof of that as it climbs the Top 15 at Texas radio, while also earning features on prominent playlists including Spotify’s “Heart of Texas” and “Texas Country Now.”

Seen as one of the genre’s finest and most genuine modern voices, Bowen’s approach stays rooted in tradition, but also stands on the creative cutting edge. His focus remains on writing unique songs with a literary quality and shifting his sonic territory to match his life, as evidenced by his uplifting new single, “When Love Comes Around,” off his brand-new EP, Where Phones Don’t Work, available everywhere now via Thirty Tigers.