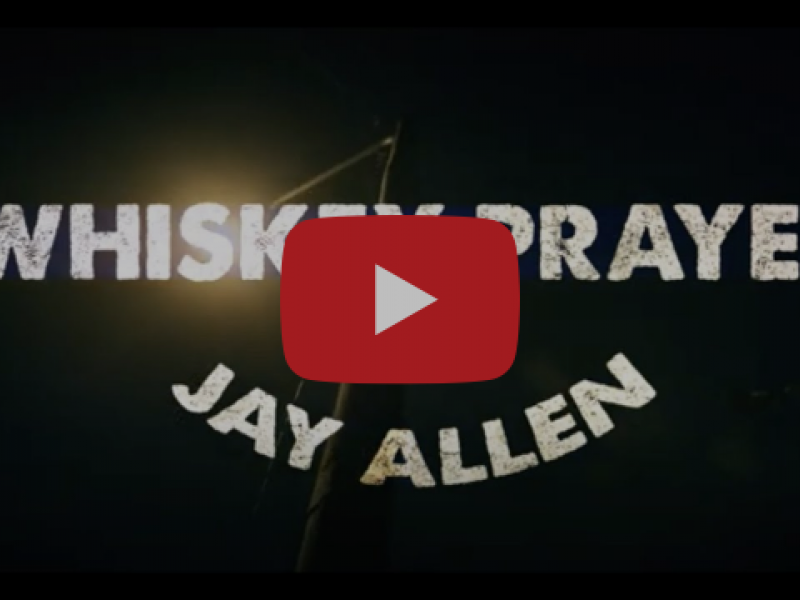 NASHVILLE, Tenn. – Jay Allen knows what it’s like to lose your mama. His latest single, “Whiskey Prayer,” along with an accompanying music video directed by Rand Smith and Jasper Fuentes and produced by Diana Garcia, is available everywhere now. Listen to “Whiskey Prayer” HERE and watch the video HERE.

Today’s release is a follow-up to “Blank Stares” and continues the story of how Allen lost his mother to early-onset Alzheimer’s in 2019—and nearly lost himself in the process.

“I wrote ‘Blank Stares’ out of heartache while mama was still alive, but ‘Whiskey Prayer’ is the one I wrote after she passed away, when I was in the most vulnerable place of my life, mourning her loss, grieving her,” Allen muses. “All I could do was write songs to cope.”

Dear God, I’ve reached the bottom
Of my faith and this bottle
I’ve been trying to leave you out of this, I swear
But if this barstool confession
Can find its way to heaven
Just let me know you’re listening up there
Would you answer this whiskey prayer?

“I was on the road a lot,” Allen continues, “in bars every night, drinking way too much, reaching out for Him with a glass in my hand. I believe God listens closely to the broken-hearted, and when I needed Him the most He was there, and that was the silver lining,” he explains. “God met me where I was, brought me out of that time and has brought so much good since then. So I took that pain and sadness and tried to turn it in to something beautiful in hopes it will help others heal from it as well.”

Fans can expect acoustic versions of the song soon. Jay Allen’s next live show is Thursday, Dec. 30 in Omaha, Neb., and features his fiancé, UMG country artist Kylie Morgan. For more information on Allen, follow him on Instagram, Twitter, TikTok @JayAllenMusic and Facebook.com/JayAllenMusic.

About Jay Allen
Jay Allen combines the grittiness of rock ’n’ roll with the tenderness of country ballads in his songs. Growing up near Cedar Falls, Iowa, Allen recalls his dad taking him to rock concerts and singing country at the top of his lungs in the car with his mother. As Allen says, “Mom is the reason I believe country music chose me and ultimately why I ended up in Nashville.” Allen moved to Nashville in 2013, and by 2014 he had signed a publishing deal. In 2016 he signed an artist deal with SONY/ATV and released “Sounds Good to Me” in 2017, which Sirius XM selected as “The Highway Find.” In 2018, after seeing his mother suffer from early-onset Alzheimer’s, Allen wrote “Blank Stares”—about the terrible ravages of the disease and his own personal loss—which has now reached over 400 million views on Facebook. As a result of the song, Allen has been involved with several international events, including the Rita Hayworth Gala, which have raised over $40 million for the Alzheimer’s Association. In 2019, Allen’s songwriting, his music and his passion and energy caught the attention of Verge Records COO Mickey Jack Cones, who signed him as Verge’s flagship artist. On Oct. 7, 2021, Allen released his debut EP Bulletproof, which includes his hot single “Mustang on Mud Tires,” featuring UMG country artist and co-writer (along with Nate Kenyon and Blake Bollinger) Kylie Morgan, with whom Allen got engaged in June of 2021.