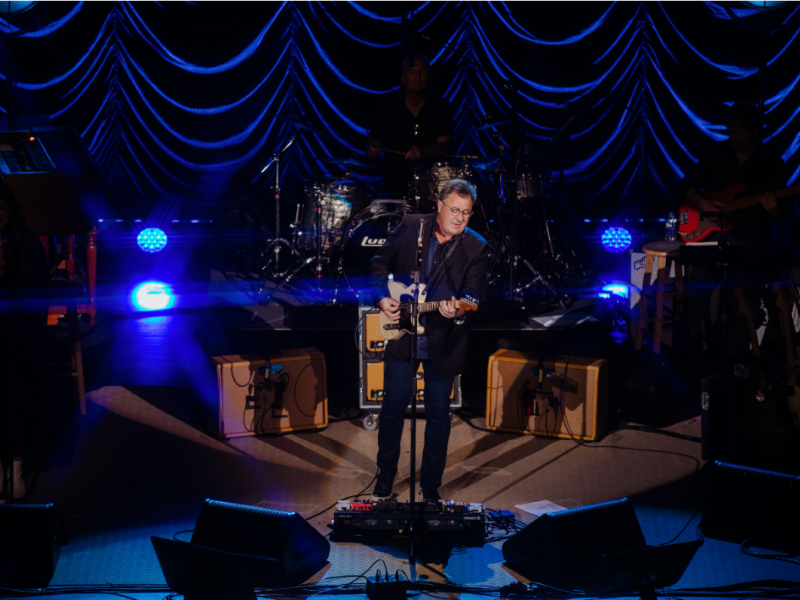 NASHVILLE, Tenn. – Due to overwhelming demand and a sold-out show at the Grand Ole Opry House on Dec. 18, GRAMMY® Award-Winning Duo for KING + COUNTRY have added a second show on Dec. 19 as part of their “Drummer Boy Christmas Tour: The 2022 LIVE Experience.” Join for King + Country for this special LIVE experience presented in a festive and high-energy fashion that the duo has become known for. Tickets are on sale now at ryman.com. The Dec. 18 concert event will also be available worldwide via ticketed livestream through Mandolin.

Brothers Joel and Luke will be bringing holiday cheer to audiences nationwide this season, performing Christmas classics and brand-new songs such as their fan favorite “Little Drummer Boy” from A Drummer Boy Christmas, #1 hit single “For God Is With Us” from their recently released Billboard Top 200 album, “What Are We Waiting For?, and many more. Fans will also have the chance to see for KING + COUNTRY perform their No. 1 charting, world renowned version of the Christmas classic “Little Drummer Boy.” To get a taste of what to expect, check out the duo’s sparkling performance of “Little Drummer Boy” on ABC’s CMA Country Christmas HERE.

FOR KING + COUNTRY is one of the music industry’s most respected and decorated duos.  Brothers Joel and Luke Smallbone have be awarded four GRAMMY® Awards, seven GMA Dove Awards, a Billboard Music Award, and 16 K-LOVE Fan Awards; and their 11 No. 1 songs have produced an astonishing 1.8 billion career streams.  The RIAA Platinum-selling act’s live show has been hailed as a must-see concert event that continues to wow sold-out crowds whether in the U.S., Australia, Germany, Netherlands, or New Zealand. FOR KING +  COUNTRY’S WHAT ARE WE WAITING FOR?, released this year, became the duo’s second Top 10 album on the Billboard 200; following their RIAA Gold certified album, BURN THE SHIPS, which also debuted in the Top 10 of the Billboard Top 200 Album Chart. The duo has had seven consecutive No. 1 songs including “For God Is With Us,” “joy.,” “TOGETHER” (feat. Kirk Franklin & Tori Kelly),” and the 11-week Platinum smash, “God Only Knows.”  The global hitmakers have collaborated with a diverse list of artists including Hillary Scott, Dolly Parton, NEEDTOBREATHE and Timbaland, amongst others.  Joel and Luke Smallbone are committed to numerous philanthropic efforts focused on human trafficking, children in need, as well as numerous programs in support of the arts.  For more information about FOR KING + COUNTRY visit: www.forkingandcountry.com
WHERE: Grand Ole Opry House, 2804 OPRYLAND DR., NASHVILLE, TN 37214

One of the most popular artists in modern country music, Vince Gill is famous for his top-notch songwriting, world-class guitar playing and warm, soaring tenor, all wrapped up in a quick and easy wit. Gill achieved his big breakthrough in 1990 with “When I Call Your Name,” which won both the Country Music Association’s (CMA) Single and Song of the Year awards as well as a Grammy for Best Country Vocal Performance, Male. Since then, Gill has won 17 additional CMA Awards, including Song of the Year four times–making him the most-awarded artist in that category in CMA history, and a total of 22 Grammy Awards, his most recent one for Best Country Solo Performance–“When My Amy Prays.”  The Academy of Country Music has conferred on Gill eight awards, including its Home Depot Humanitarian Award and the Career Achievement Award. A gifted songwriter, Gill’s compositions earned him the prestigious BMI Icon award in 2014, and entry into theNashville Songwriters Hall of Fame in 2005. In 2007, Gill was inducted into the Country Music Hall of Fame, and in 2012 he was honored with a star on the Hollywood Walk of Fame which was placed in cement right next to his wife Amy Grant’s star. In 1991, Gill was invited to become a member of the Grand Ole Opry, a position he treasures. He continues to perform on that historic stage on a regular basis. Throughout his career he has released 20 albums, sold over 30 million albums, and charted 45 singles.Known for his many collaborations, Gill has made guest appearances on more than 1000 albums, and has performed and/or recorded with artists such as Barbra Streisand, James Taylor, Sting, Emmylou Harris, Diana Krall, Jimmy Webb, Bruno Mars, Willie Nelson, Dolly Parton, and George Jones. His collaborative efforts also include albums he has produced for Amy Grant, Ashley Monroe, The Time Jumpers and Wendy Moten. Always considering himself a musician above all else, Gill has over the years been a part of some iconic bands including Pure Prairie League, The Cherry Bombs, and The Time Jumpers. In 2017 Vince was asked to join the Eagles on the road and continues to be a part of that historic band’s tour. Gill’s current album, the critically acclaimed OKIE, is his most personal album, as he sings about his wife in prayer, about kindness and forgiveness, about his heroes in death, and about his own loves, joys, and regrets. For a complete bio, full list of tour dates, news, images and more, visit VinceGill.com.

CONCERT FOR CUMBERLAND HEIGHTS WITH STEVE EARLE & THE DUKES
Sept. 21 at 7:30pm CT

The Concert for Cumberland Heights is an annual fundraiser that began in 1996 to raise much needed funding for adolescent and young adult programs. The event at The Ryman Auditorium has featured artists like Trisha Yearwood, John Hiatt, Josh Turner, Here Come The Mummies, and more. Since its inception, the concert has raised over $3.4 million for families struggling. About 2,400 people attend the concert each year, and more than 330 guests attend the pre-concert party.

“The first time Yelawolf and I connected on a track, it was like this fire exploded in my mind,” says Shooter Jennings. “It confirmed my long-held suspicion that there was something really special between the two of us.” Special, it turns out, is a serious understatement when it comes to Jennings and Yelawolf’s extraordinary new collaboration, Sometimes Y. Recorded in the midst of the COVID-19 pandemic, the duo’s self-titled debut is a bold and intoxicating rock and roll hybrid, one that fuses past and future sounds to conjure up some alternate universe where David Bowie fronted Thin Lizzy or Axl Rose sang with The Cars. The songs here are as addictive as they are unpredictable, mixing ’80s bombast and arena rock energy with country earnestness and hip-hop swagger, and the performances are thrilling to match, fueled by the pair’s undeniable chemistry and irrepressible joy. Jennings’ production work is lush but never crowded, and Yelawolf’s lyrics are utterly arresting, grappling insightfully with purpose and perseverance, struggle and triumph, pain and transcendence. Weighty as the record can feel at times, it’s ultimately a work of liberation and release, an ecstatic declaration of creative freedom fueled by adventure, discovery, and a little bit of chaos, which is precisely what Sometimes Y is all about.

With holiday album Mr. Christmas released last year, platinum-selling recording artist Brett Eldredge is set to perform three back-to-back nights at the historic Ryman Auditorium as part of his Glow LIVE Holiday Tour. Mr. Christmas features the classics we all know and love alongside two originals, including the title track “Mr. Christmas.” Written by Eldredge and frequent collaborator Ross Copperman, “Mr. Christmas” showcases the celebrated singer/songwriter’s “rich, smooth vocals” (Forbes) backed by orchestral strings, a warm big band sound and pops of jingle bells, giving the listener a musical wink and a nod as though from Santa himself.

Join storied Nashville singer-songwriter and author Andrew Peterson as he presents the Advent song cycle Behold the Lamb of God: The True Tall Tale of the Coming of Christ. Now in its 23rd year, Behold the Lamb brings the singing and playing of Peterson’s original folk-roots infused rendition of the Christmas story as it is foreshadowed in the Old Testament and brought to bear in the New.

The Allman Family Revival is a celebration of the life, spirit, and music of Gregg Allman, hosted by his son, Blues Music Award winning Devon Allman and anchored by his group, The Devon Allman Project.  On what would have been Gregg Allman’s 70th Birthday, Devon decided to gather his talented friends to pay homage musically.  Musicians that had toured with Gregg, jammed with Gregg & inspired by Gregg turned up to throw down.  Legends like Robin Zander of Cheap Trick showed up, wunderkind Marcus King tore the theater down, Orbison’s were in the house … a who’s who of musical talent have taken part.Now … It’s a yearly tradition, and it’s grown from an annual celebration in San Fransisco to a full fledged coast to coast tour.  Based on the format of “The Last Waltz” concert featuring up to a dozen marquee names in music, it’s an epic 3 hour show unlike any other. This year we welcome Duane Betts, Donavon Frankenreiter, Maggie Rose, Jimmy Hall, Larry McCray, Alex Orbison and The River Kittens, plus, of course, more surprises to come. Don’t miss this incredible celebration of life and music, you’ll be part of the family too.

As much as he treasures his roles as a guitarist, composer, and producer, Cory Wong fashions himself “a hype man,” first and foremost. Living up to this classification, he slings a Stratocaster and hurls “dad jokes” from the stage with the same panache, poise, and power. “For me, it’s all about the listener’s experience,” he explains. “I want them to have a visceral response like: ‘I feel better,’ ‘That was really fun,’ or ‘I got to escape for an hour.’ You’ll hear my voice through the guitar, but I’m just a hype man. To uplift audiences with instrumental music that has no singing or lyrics is a fun challenge. I’m trying to solve the riddle. If I can get one person to feel good this way, it’s a success. Straight out of Minneapolis, Cory positioned himself as music’s answer to motivational speakers like Tony Robbins since emerging in 2011. Head-spinning rhythm guitar wizardry, technical ebullience, laugh-out-loud jokes, and radiance on stage established him as both a sought-after collaborator and celebrated solo artist alike. He lent his talents to television programs such as The Voice at the dawn of his career. After an impromptu meeting at the weekly jam hosted by Prince’s rhythm section (where the Purple One often either performed or watched), he crossed paths with Vulfpeck who welcomed him as a frequent collaborator and member of the band. Solidifying a fruitful partnership, the group named their most popular instrumental track “Cory Wong,” in tribute. Lighting up the stage in the band everywhere from Red Rocks Amphitheatre to Madison Square Garden, he remains a cornerstone of Vulfpeck’s storied gigs.