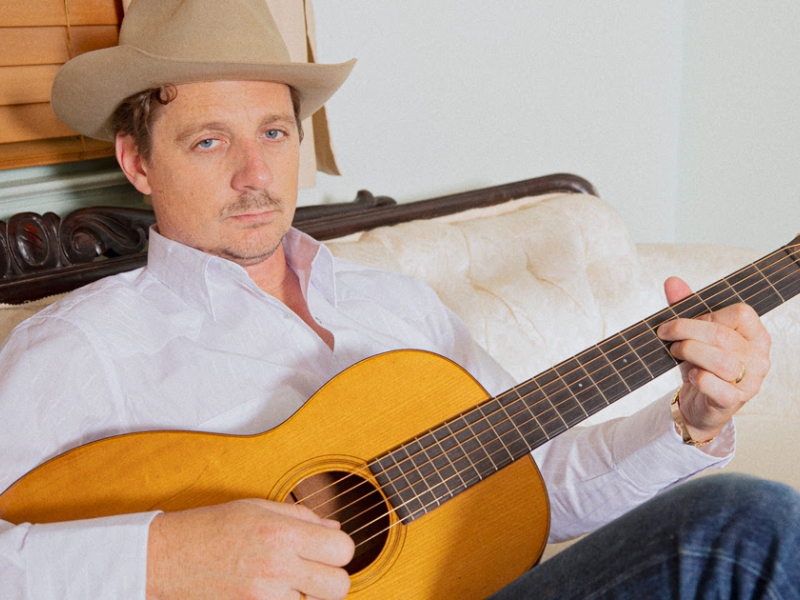 An Evening with Sturgill Simpson Announced for November 18-20

NASHVILLE, Tenn. – GRAMMY-nominated artist Sturgill Simpson is set to perform at the historic Ryman Auditorium for three consecutive evenings November 18-20. Tickets for An Evening with Sturgill Simpson start at $49.50 and are available now at ryman.com.

Simpson will be releasing a new concept album, The Ballad of Dood and Juanita, digitally and on CD on August 20th, vinyl release will be December 3rd.  This is the Grammy-winning singer/songwriter's third album in twelve months and his most ambitious project to date.

“I just wanted to write a story—not a collection of songs that tell a story, but an actual story, front to back,” says Simpson. He describes the concept album as a “rollercoaster ride through all the styles of traditional country and bluegrass and mountain music that I love, including gospel and a cappella.”  Written and recorded in less than a week, the new album features the same ace musicians who played on last year's Cuttin' Grass albums and is what Simpson calls “a simple tale of either redemption or revenge.”

Simpson is currently on location filming his role in Martin Scorsese’s upcoming movie Killers of the Flower Moon and will be touring again starting in September.

Multi-Platinum superstar Darius Rucker will return to historic Ryman Auditorium on Tuesday, August 17 for his 12th annual “Darius and Friends” concert benefiting St. Jude Children’s Research Hospital®. The event, which occurred virtually in 2020 and has raised over $2 million to date, will celebrate a return to live shows with an all-star roster of friends to be announced in the coming weeks. As an added bonus, fans and supporters can also tune in from home via a new hybrid concert model. Rucker, who has always prioritized philanthropic work, made a commitment after touring the facility in 2008 to support the lifesaving mission of St. Jude: Finding cures. Saving children.® Supporters like Rucker and friends help ensure families never receive a bill from St. Jude for treatment, travel, housing or food – because all a family should worry about is helping their child live. Friends performing with Rucker in past years have included Lauren Alaina, Brooks & Dunn, Kane Brown, Luke Bryan, Luke Combs, Sheryl Crow, Randy Houser, Ashley McBryde, A.J. McLean of the Backstreet Boys, Brad Paisley, Kenny Rogers and Brett Young, among many others. The lineup for this year’s event will be announced soon. Tickets start at $52.

Daughtry, one of the most visible and consistent rock & roll torchbearers of the 21st century, has sold over 9 million albums and 16 million singles worldwide as well as selling out concerts across the globe. Their debut album, the self-titled Daughtry, was the top-selling album of 2007, producing 4 Top 20 platinum-selling singles on the Billboard Hot 100 and became the fastest-selling rock debut album in Soundscan history. It was also nominated for 4 Grammy Awards and won 4 American Music Awards and 7 Billboard Music Awards including Album of the Year. The subsequent albums, Leave This Town (2009), Break The Spell (2011), Baptized (2013) and Cage To Rattle (2018) were all certified Gold and placed in the top 10 in the Billboard Top 200 Albums Chart. In 2020, Daughtry released their newest single, “World On Fire,” which marked their return to their rock roots and the top of the rock charts in the US. Tickets start at $39.50.

Hailing from Old Hickory, Tennessee, stand-up comedian Nate Bargatze is selling out shows across the world on his Raincheck Tour. Nate followed in the showbiz footsteps of his dad, a former clown turned world class magician, who’s influence is seen on Nate’s 2015 debut special Full Time Magic and his debut album Yelled at By a Clown. Nate’s Netflix Special The Standups was followed by Nate’s first solo one-hour Netflix special, The Tennessee Kid, which premiered globally with rave reviews, and recently released his highly anticipated 2nd special for the streaming platform, The Greatest Average American. Nate was featured as one of Esquire’s “Best New Comedians” by Jim Gaffigan, one of Marc Maron’s “Comedians to Watch” in Rolling Stone, one of Variety’s “10 Comics to Watch” for 2015, and as #1 on Vulture’s ‘50 Comedians You Should Know’ in 2015. His debut one-hour special, Full Time Magic, premiered on Comedy Central that spring, followed by his debut album, Yelled at by a Clown, which reached #1 on the iTunes Comedy Charts and remained on Billboard’s Top Ten Comedy Charts for weeks. Tickets start at $39.75.

The War On Drugs has partnered with PLUS1 so that $1 from every ticket will go to saving lives, revitalizing communities, and transforming global health through Partners In Health. www.pih.org

Mixing the grand-scale guitar attack of Sonic Youth and My Bloody Valentine with a melodic sense and lyrical perspective that recall Bob Dylan roaring down Highway 61, Philadelphia’s the War on Drugs slowly grew from indie favorites to a hit with larger, more mainstream audiences. In 2020, recordings from the tour were compiled for the live album Live Drugs. In advance of the record’s November release, the band shared their cover of Warren Zevon‘s “Accidentally Like a Martyr” from the album and announced a four-episode podcast where they’d discuss touring and the band’s creative process while making Live Drugs. Tickets start at $40.

The sophomore full-length from Clairo, Sling is an album with its own charmed atmosphere, graced with the easy warmth of a far lovelier era but wholly the outcome of her bright & restless mind. In creating the body of work, the 22-year-old co-produced alongside Jack Antonoff, recording at Allaire Studios in Upstate New York. Several tracks feature background vocals from Lorde, “Blouse” offers a meditation on the degrading behavior of men in power. Her sophomore album, Sling provided countless moments of revelation for Clairo. While a number of guest musicians contributed to the album’s arrangements, most was handled by Clairo & Antonoff. The result is a perfect setting for Clairo’s songwriting, allowing abundant space for her nuanced exploration of mental health, unmet expectations, and the struggle to treat ourselves with gentleness and love. Tickets start at $35.