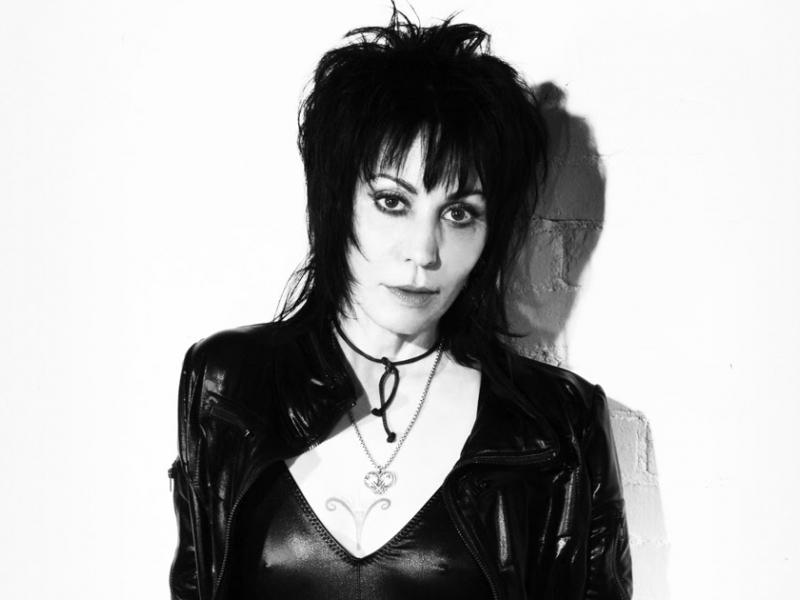 Rock and Roll Hall of Fame inductees Joan Jett & the Blackhearts are set to headline the Ryman Auditorium on August 8 at 7:30pm CDT. Tickets start at $49.50 and are available now at ryman.com.

Joan Jett is an originator, an innovator, and a visionary. As the leader of the hard-rocking Blackhearts, she’s had eight Platinum and Gold albums and nine Top 40 singles, including the classics “Bad Reputation,” “I Love Rock ‘N’ Roll,” “I Hate Myself For Loving You,” and “Crimson and Clover.”

Her independent record label, Blackheart, was founded in 1980 after she was rejected by no less than 23 labels. Blackheart is one of the longest running indie labels and continues to give voice to new bands. As a producer, she has overseen albums by Bikini Kill, Circus Lupus, as well as the Germs’ LA punk masterpiece, GI.

Jett’s music has become a permanent force in mainstream culture. Jett and the Blackhearts continue touring the globe with headline shows alongside fellow rock icons like The Who, Green Day and the Foo Fighters.

Additionally, Jett has acted and appeared in movies, television and theater. Jett was also able to see her story told in The Runaways, the feature film based on her first band, starring Kristen Stewart as Jett and Dakota Fanning as Cherie Currie. Jett was close to the project, serving as executive producer. Bad Reputation, a documentary about Jett’s life, premiered to critical acclaim at the 2018 Sundance Film Festival. The film continues to receive praise and accolades and is available on all streaming platforms.

Nominated in 1999 for an Emmy Award for his memorable role as Dennis Finch, the wise-cracking, power-hungry assistant on Just Shoot Me, David Spade became a household favorite during his five-year stint as a cast member on NBC’s Saturday Night Live. He was also nominated for a Golden Globe in 2000 and an American Comedy Award in 1999 for his work on NBC’s Just Shoot Me. Spade continues to be a box office draw and continues to do stand-up tours nationwide. This past spring, Spade starred in the Netflix original comedy, The Wrong Missy, which was the number one movie on Netflix in the days following its release on May 13, 2020. The film was also announced as the eighth most watched Netflix original movie in the company’s history. Born in Birmingham, Michigan, and raised in Scottsdale, Arizona, Spade began his career by performing stand-up comedy in clubs, theaters and colleges across the country. He made his television debut on SNL and was soon after named the “Hot Stand-Up Comedian of the Year” by Rolling Stone Magazine. As a writer and a performer on SNL for five years, he is best known for his memorable characters including the sarcastic “Hollywood Minute” reporter on “Weekend Update” and catch phrases like “And you are…?” and “Buh-Bye!” Tickets start at $45.

When Lee Brice isn’t selling out arenas, writing and recording songs, or building new brands like American Born whiskey, you’ll find the family man with his wife Sara, two young boys, and baby daughter. Meanwhile, with more than 1.8 billion on-demand streams, and three billion spins on Pandora, Brice continues to enjoy massive success at country radio, digital streaming services, and on the road. One of the most-played country artists of all time on Pandora, he is a member of the company’s “Billionaires Club,” becoming only the second country artist behind Keith Urban to receive the Pandora Billionaire plaque. Lee is also a GRAMMY nominee, a CMA nominee and a double ACM award winner, and he’s taken six radio singles to Number One: “A Woman Like You,” “Hard To Love,” “I Drive Your Truck,” “I Don’t Dance,” “Drinking Class,” and “Rumor.” Garth Brooks, Jason Aldean, Kenny Chesney and others have recorded his songs, and he’s performed on numerous TV shows, including NBC’s Today, ABC’s The Bachelor, NBC’s The Voice and FOX’s Miss USA 2018. Brice is following the massive success of his hit “Rumor” with the announcement of his new radio single / song, “One of Them Girls,” is available now.

For more than twenty years, Bill Maher has set the boundaries of where funny, political talk can go on American television. First on “Politically Incorrect” (Comedy Central, ABC, 1993-2002), and for the last fourteen years on HBO’s “Real Time,” Maher’s combination of unflinching honesty and big laughs have garnered him 41 Emmy nominations. Maher won his first Emmy in 2014 as executive producer for the HBO series, “VICE.” In October of 2008, this same combination was on display in Maher’s uproarious and unprecedented swipe at organized religion, “Religulous,” directed by Larry Charles (“Borat”). The documentary has gone on to become the 8th Highest Grossing Documentary ever. In addition to his television program, Maher has written five bestsellers: “True Story,” “Does Anybody Have a Problem with That? Politically Incorrect’s Greatest Hits,” “When You Ride Alone, You Ride with Bin Laden,” “New Rules: Polite Musings from a Timid Observer,” and most recently, “The New New Rules: A Funny Look at How Everybody But Me Has Their Head Up Their Ass.” Maher started his career as a stand-up comedian in 1979, and still performs at least fifty dates a year in Las Vegas and in sold out theaters all across the country. Four of his ten stand-up specials for HBO – 2014’s “Bill Maher: Live from DC,” 2007’s “The Decider,” 2005’s “I’m Swiss,” as well as the hilarious, “Bill Maher … But I’m Not Wrong,” – have been nominated for Emmy awards. Tickets start at $59.50.

Singer/songwriter and multi-instrumentalist Parker McCollum began building a following in his native Texas with 2015’s The Limestone Kid. The album track “Meet You in The Middle” became a hit on Texas’ regional radio chart — no small feat for an independent, 22-year-old musician — but it was the album’s widely-acclaimed follow-up, Probably Wrong, that helped Parker find national success. Compared to John Mayer and Jason Isbell by Rolling Stone, Parker supported the album with a string of sold-out shows, bringing record-breaking crowds to venues like San Angelo’s RiverStage and two sold-out Billy Bob’s along the way. Parker just released his new EP, Hollywood Gold, which is named after a horse his grandfather owned decades ago. Hollywood Gold includes Parker’s debut single “Pretty Heart” which has already cracked Top 10 on the country radio chart averaging almost 4 Million streams a week and was recently certified Gold. Parker has been named an artist to watch by Rolling Stone, Billboard, SiriusXM, CMT and more with American Songwriter noting, “The Texas native teeters on the edge of next-level superstardom, taking cues from rule breakers like Chris Stapleton and Kacey Musgraves. 2020 will be his long-overdue breakout.” Tickets start at $30.

YOU GOT GOLD: CELEBRATING THE LIFE AND SONGS OF JOHN PRINE
October 6 and 7 at 7:30pm CDT

The Prine Family Presents: You Got Gold: Celebrating the Life and Songs of John Prine, is a week long series of concerts & events with a unique lineup, taking place October 3-10 in Nashville, TN. Tickets start at $50.

Ryman Auditorium strictly complies with safety regulations that include socially distanced seating, mandatory masks for all guests and staff, and enhanced cleaning practices. For complete details, seating chart and more information about the safety precautions or to purchase tickets, please visit ryman.com.