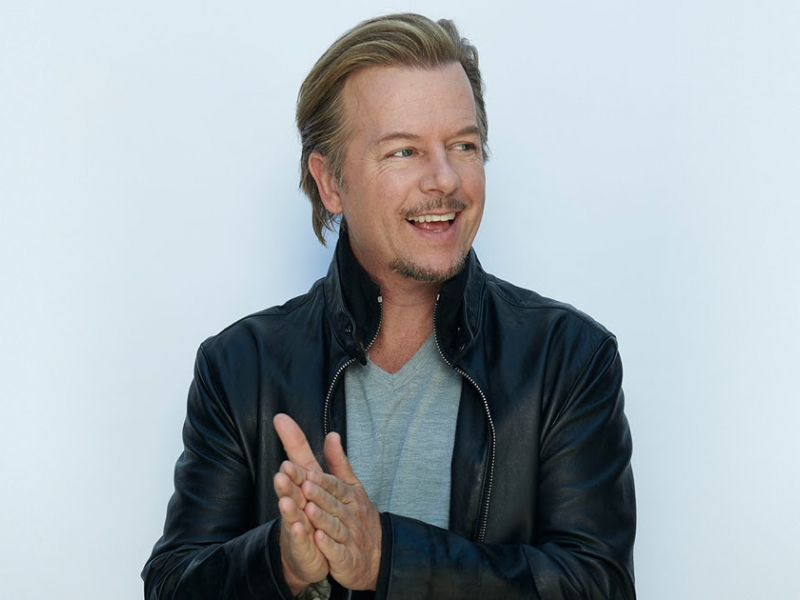 Award-winning comedian David Spade will perform at Ryman Auditorium during the Nashville Comedy Festival on June 16 at 7pm CDT. Tickets start at $45 and will go on sale Monday, May 24 at 10 am CDT at ryman.com.

Nominated in 1999 for an Emmy Award for his memorable role as Dennis Finch, the wise-cracking, power-hungry assistant on Just Shoot Me, David Spade became a household favorite during his five-year stint as a cast member on NBC’s Saturday Night Live. He was also nominated for a Golden Globe in 2000 and an American Comedy Award in 1999 for his work on NBC’s Just Shoot Me. Spade continues to be a box office draw and continues to do stand-up tours nationwide. This past spring, Spade starred in the Netflix original comedy, The Wrong Missy, which was the number one movie on Netflix in the days following its release on May 13, 2020. The film was also announced as the eighth most watched Netflix original movie in the company’s history.

Other popular film credits include Sony Pictures’ Benchwarmers and Paramount Pictures’ Dickie Roberts: Former Child Star, the latter which he co-wrote with Fred Wolf. Both opened number one at the box office and enjoyed critical and commercial success. Spade also co-starred with SNL alumnus Chris Farley in the films Tommy Boy and Blacksheep, the former for which the pair won a 1996 MTV Movie Award for “Best On-Screen Duo.” He has also appeared in Reality Bites, Light Sleeper, Coneheads and Lost & Found (which he also co-wrote the screenplay).

Born in Birmingham, Michigan, and raised in Scottsdale, Arizona, Spade began his career by performing stand-up comedy in clubs, theaters and colleges across the country. He made his television debut on SNL and was soon after named the “Hot Stand-Up Comedian of the Year” by Rolling Stone Magazine. As a writer and a performer on SNL for five years, he is best known for his memorable characters including the sarcastic “Hollywood Minute” reporter on “Weekend Update” and catch phrases like “And you are…?” and “Buh-Bye!”

Although born in South Carolina, singer/songwriter Dave Barnes spent most of his childhood in Mississippi, where he formed an early attachment to hip-hop but was also exposed to classic soul, blues, and R&B by his parents. He later enrolled at Middle Tennessee State University and began writing songs for other artists. Barnes also played solo shows on campus, and by the time he graduated with a degree in recording industry management, he'd decided to pursue his own music career. Barnes moved to Nashville, Tennessee, and gravitated toward the city's acoustic folk scene. The desire to make more groove-oriented music convinced him to assemble a full band, though, and he did so by adding Justin Rosolino on guitar, Matt Mangano on bass, Ben Shive on keyboards, and Josh Robinson on drums. Barnes' soulful pop songs won him the support of artists like John Mayer (his labelmate on Aware Records), while the spiritual tone of his lyrics earned some support from the Christian music scene. He remained on Aware's roster for two albums -- 2004's Brother, Bring the Sun and 2006's Chasing Mississippi, both produced by Ed Cash -- before moving to Razor & Tie for 2008's Me and You and the World and 2010's What We Want, What We Get. The latter album became a surprise Christian hit, debuting in the Top Five on the Christian charts thanks in part to the single "God Gave Me You." A year later, Blake Shelton recorded "God Gave Me You" on his Red River Blue album and his version topped the country chart, earning Barnes a Grammy nomination in the process. Tickets start at $30.

Ashley McBryde cut her teeth playing country songs in rural biker bars – and it shows. Her 2018 major label debut Girl Going Nowhere (Warner Music Nashville) charmed the New York Times, NPR, Rolling Stone, Paste, The Washington Post, and more, all en route to landing a GRAMMY nomination for Best Country Album. McBryde closed out 2019 with ACM New Female Artist, CMT Breakout Artist of the Year, a New Artist of the Year win at the 53rd Annual CMA Awards and two nominations for the 2020 GRAMMYs for Best Country Song and Best Country Solo Performance for “Girl Goin’ Nowhere.” Her follow-up Never Will, released April 3, was tagged by Rolling Stone as one of the most anticipated of the year alongside NPR, who also ranked her lead Top 10 RIAA Gold-Certified single “One Night Standards” as one of the best songs of 2019. Produced once again by Jay Joyce, Never Will reveals the witty, confessional, detail-driven songwriting addressing a wide spectrum of blue-collar Southern women’s experience introduced on Girl Going Nowhere is still here, but perhaps even sharper, earning McBryde a 2021 GRAMMY nomination for Best Country Album, making Never Will the only album nominated for Country Album of the Year by the ACMs, CMAs and the Recording Academy in the same award season. The music itself is stadium-ready rock-and-roll with a bluegrass wink or two and country music’s storytelling heart––and McBryde, no longer new, is the music’s ordained and highly capable standard bearer. Tickets start at $24.

Dashboard Confessional took root in Boca Raton, Florida. Singer/songwriter Chris Carrabba molded simple acoustics with passionate, personal wordplay on his 2000 debut, Swiss Army Romance, and a devout audience began to gather around the naked honesty of his lyrics. The Drowning EP was released in early 2001, with the full-length album The Places You Have Come to Fear the Most following soon after. The latter release featured a full band on several tracks -- a vast departure from Carrabba's previously unaccompanied material -- and the heart-rending single "Screaming Infidelities" found an immediate home on modern rock radio. Carrabba returned in 2003 with a permanent lineup -- including bassist Scott Schoenbeck, guitarist/pianist Johnny Lefler, and drummer Mike Marsh -- and a new album, A Mark, a Mission, a Brand, a Scar. The record topped the Billboard charts and spawned another hit single, "Hands Down," which peaked at number eight. However, it was the band's contribution of the song "Vindicated" to 2004's Spider-Man 2 soundtrack that truly resonated with a wide audience, with the song rising to number two. Chris Carrabba explored both sides of his personality -- the acoustic, campfire-worthy songwriter and the full-band frontman -- with 2009's Alter the Ending. After an extended, nearly decade-long hiatus, Carrabba resurrected Dashboard Confessional for 2017's Covered and Taped EP, which featured covers of songs by the 1975, Justin Bieber and others. Early in 2018, Carrabba returned with Crooked Shadows, his first collection of original material in eight years. Vastly different from anything they'd done before, the set featured appearances by electronic dance act Cash Cash ("Belong"), electro-violinist Lindsey Stirling ("Open My Eyes"), and Chrissy Costanza ("Just What to Say"). The next year, Carrabba surprised fans with re-recorded acoustic versions of A Mark..., Dusk and Summer and Alter the Ending. Continuing down the retrospective path, Carrabba celebrated the 20th anniversary of the band's debut with a greatest-hits collection, 2020's The Best Ones of the Best Ones. Tickets start at $32.50.

Caamp formed when Taylor Meier and Evan Westfall met and bonded over a shared love of music and a shared love of home, specifically the inspiration they culled from the Midwest lives they grew up in. The two began writing and performing and quickly grew a rabid fan base. A self-titled 2016 debut album took flight, quickly gaining over 170 million streams, with a staggering 70 million streams for their single “Vagabond ” alone. Evan and Taylor brought on a third member and longtime friend, Matt Vinson, to join on bass just before recording By and By. By and By entered the Billboard Top 200, was the #1 Heatseeker, #1 on the New Artist Alternative Albums, top 5 vinyl album sales for the week and entered the Alternative and Emerging Artist charts. Caamp then scored their first #1 at radio with their single “Peach Fuzz,” made their late night television debut on Jimmy Kimmel Live!, and followed that up with a killer performance on CBS This Morning Saturday. After a victorious 2019 festival season playing Firefly, Shaky Knees, Forecastle, Outside Lands, Austin City Limits, Great Escape and many more, Caamp kicked off a major US headlining tour in September of 2019 and sold out show after show. They’ve kicked off the new year with “Officer of Love” hitting #1 at AAA radio for 2 consecutive weeks. Fans can expect new music from Caamp in 2021. Tickets start at $30.

If the phrase “male a cappella group” conjures up an image of students in blue blazers, ties, and khakis singing traditional college songs on ivied campuses … think again. Straight No Chaser (SNC) are neither strait-laced nor straight-faced, but neither are they vaudeville-style kitsch. They have emerged as a phenomenon with a massive fanbase and a long list of accomplishments including 2 RIAA Gold Certified albums, over 1.5 million concert tickets sold, over 1 billion streams on Pandora, and over 2 million albums sold worldwide. Straight No Chaser is the real deal, the captivating sound of nine unadulterated human voices coming together to make extraordinary music that is moving people in a fundamental sense … and with a sense of humor. Tickets start at $37.50.

Come experience songs from Zach Williams’ album, Rescue Story, as well as some of your favorites like “Chain Breaker,” “Fear Is A Liar” and “Old Church Choir.” He can’t wait to join you for an inspirational night of music and stories, and he hopes that this tour will help you to have a real encounter with the God who loves you and cares deeply for you. Tickets start at $25.