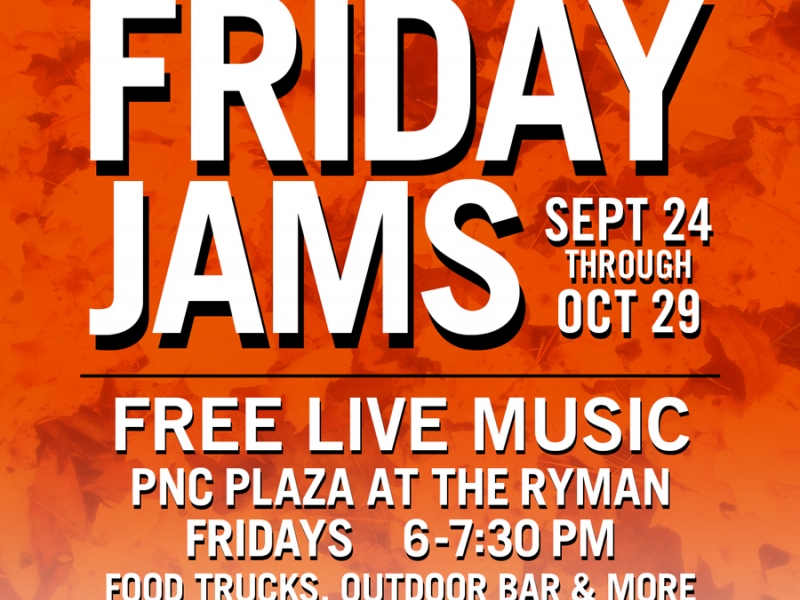 NASHVILLE, Tenn. – Known around the globe as one of the best performance halls in the world, Ryman Auditorium celebrates all genres, backgrounds and people on its stage and in every pew with its diverse calendar, including recently announced shows Old Crow Medicine Show, Brett Eldredge, Fisk Jubilee Singer’s 150th Anniversary Concert, She & Him and more. See the full show calendar and purchase tickets at ryman.com.

Outside the historic hallowed hall, the Ryman presents Fall Friday Jams on PNC Plaza. Before all Friday night shows from Sept. 24 through Oct. 9, each Party on the Plaza will feature live music, food trucks, giveaways and more, sponsored by Hiller, MTSU, New Belgium Beer Company and Farm Bureau Health Plans. Live music will run from 6:00-7:30 pm each night. There will be an outdoor bar open on the plaza plus ticket giveaways and more. Entry is free and you do not need a ticket to the show that night to attend the plaza party.

The Fisk Jubilee Singers are vocal artists and students at Fisk University in Nashville, TN., who sing and travel worldwide. The original Fisk Jubilee Singers introduced ‘slave songs’ to the world in 1871 and were instrumental in preserving this unique American musical tradition known today as Negro spirituals. They broke racial barriers in the US and abroad in the late 19th century and entertained Kings and Queens in Europe. At the same time, they raised money in support of their beloved school. In 1999, the Fisk Jubilee Singers were featured in Jubilee Singers: Sacrifice and Glory, a PBS award-winning television documentary series, produced by WGBH/Boston. In 2008, the Fisk Jubilee Singers were selected as a recipient of the 2008 National Medal of Arts, the nation’s highest honor for artists and patrons of the arts. The award was presented by President George W. Bush and first lady Laura Bush, during a ceremony at the White House. The Fisk Jubilee Singers continue the tradition of singing the Negro spiritual around the world. This allows the ensemble to share this rich culture globally, while preserving this unique music. Tickets start at $46.50.

Sweden’s pioneers of death and progressive metal, Opeth, have been widely recognized as one of the genre’s most innovative and influential bands over the course of 13 landmark albums. Rolling Stone says, “Opeth have been one of the bands who have defined the sound of modern metal.” The band’s latest record, 2019’s In Cauda Venenum, continued their lauded evolution, delving further into the far reaches of the photosphere and was highly praised on End of Year Lists by the likes of Decibel, Loudwire, Consequence and Rolling Stone.

GRAMMY Award-winning band Mastodon continue to chart their own course through their highly successful music career. The group have unleashed a series of influential albums. Rolling Stone notably cited 2004’s Leviathan on its coveted The 100 Greatest Metal Albums of All Time. Meanwhile, Crack The Skye closed out 2009 on year-end lists by everyone from Time to Spin. They delivered three consecutive Top 10 debuts on the Billboard Top 200 with The Hunter, Once More ‘Round the Sun, and Emperor of Sand. Tickets start at $39.50.

With holiday album Mr. Christmas on the way, platinum-selling recording artist Brett Eldredge is set to perform two back-to-back nights at the historic Ryman Auditorium as part of his Glow LIVE Holiday Tour. Mr. Christmas is available to pre-order now and features the classics we all know and love alongside two never-before-heard originals, including the title track “Mr. Christmas.” Written by Eldredge and frequent collaborator Ross Copperman, “Mr. Christmas” showcases the celebrated singer/songwriter’s “rich, smooth vocals” (Forbes) backed by orchestral strings, a warm big band sound and pops of jingle bells, giving the listener a musical wink and a nod as though from Santa himself. Tickets start at $35.

She & Him, the duo featuring Zooey Deschanel and M. Ward, will perform at the Ryman as part of their eight-concert tour this December, following the release of A Very She & Him Christmas’ 10th Anniversary Edition. A Very She & Him Christmas marked the pair’s third studio album and was originally released in October of 2011. The limited-edition deluxe reissue includes the album pressed on silver vinyl along with a new 7-inch featuring the “Holiday” cover backed by a take on Wham!’s “Last Christmas.” Additionally, A Very She And Him Christmas 10th Anniversary Deluxe Edition comes with a bonus download for the duo’s version of “It’s Beginning To Look A Lot Like Christmas,” a song by Meredith Wilson that Big Crosby and Perry Como popularized. Tickets start at $39.50.

Continuing a Nashville tradition, two-time GRAMMY award winners Old Crow Medicine Show are once again set to ring in the New Year at Ryman Auditorium, performing for two consecutive nights on Dec. 30 at 7:30pm CST with special guest Sierra Ferrell and Dec. 31 at 9pm CT with special guest Keb' Mo'. Tickets for Dec. 30 start at $39.50 and tickets for Dec. 31 start at $59.50.

Abner Ramirez and Amanda Sudano translate the memories, moments and milestones on their journey as a married couple into spirited, slick and soulful anthems steeped in singer-songwriter tradition, yet amplified by alternative experimentation, rock energy and pop ambition. Building a fanbase through constant touring, 2013’s Heart Beats EP spawned “Don’t Let It Get You Down,” which clocked 17 million-plus Spotify streams. Their first full-length, Diamonds, arrived in 2014 as its single “Home” famously became the theme to HGTV hit Fixer Upper. Along the way, they garnered acclaim from Rolling Stone, NPR, The New York Times, Huffington Post, Nylon, Du Jour, and VH1 in addition to performing on The Today Show, Conan, and more. Tickets start at $29.50.