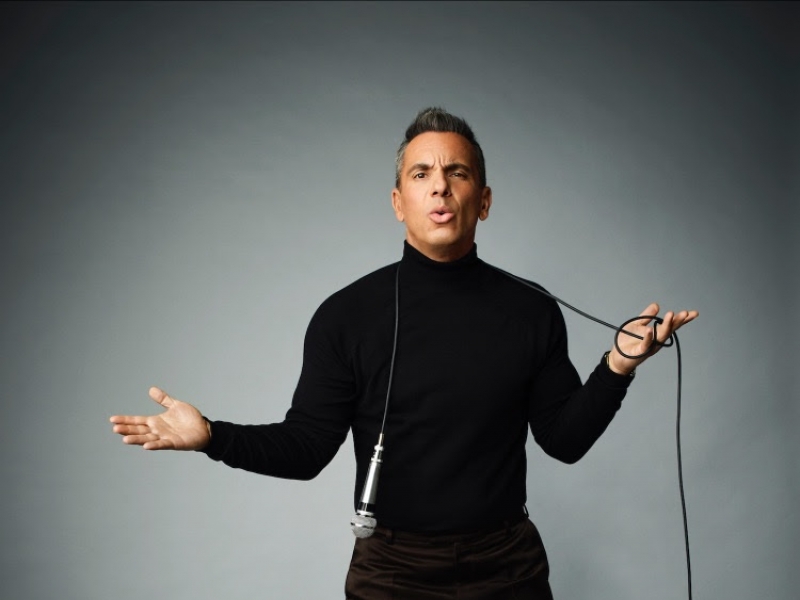 Touted as “…the hottest comic in America,” by The New York Times, join Sebastian Maniscalco as he kicks off his Nobody Does This Tour at the historic Ryman Auditorium during the Nashville Comedy Festival on June 12 at 7pm CDT. Tickets start at $59.75 and are available now at ryman.com.

Maniscalco has celebrated heights only a few comedians ever achieve. A string of record-breaking, sold-out arena shows include a comedy record for Chicago’s United Center with 21,286, the highest gross for a single event at Boston’s TD garden and a historic four show run at Madison Square Garden breaking the record for most shows sold in a weekend for the venue. That blockbuster success coupled with Netflix original comedy specials and a starring role alongside Robert DeNiro, Al Pacino, and Joe Pesci in Martin Scorsese’s Oscar-nominated The Irishman, it’s no surprise that both Pollstar and Billboard have honored the standup with their top touring awards.

On top of coming to a city near you in 2021 fans will also find the always bothered comedian on their TV exploring the world of food in his own show for Discovery+ to be released later this year.

Leanne’s style of comedy combines her southern charm and hilarious story telling about her own life into an act that keeps them coming back for more. As a stay-at-home, mother of three with a husband, people are always accusing her of spying on them because she seems to be living the same life that they do. The fact that everyone can relate to her comedy has made her a hit even among the strangest of audiences. While performing in San Antonio she was asked to appear at the Las Vegas Comedy Festival and shortly thereafter appeared on ABC’s The View in a hilarious housewife segment. Leanne appeared as a finalist on Nick at Nite’s Funniest Mom and toured three years with the Southern Fried Chicks. She counts as her celebrity fans, Dr. Phil and Paula Deen. She has appeared on both their shows. Leanne and fellow comic Reno Collier recently co-hosted Chewing the Fat, a weekly radio show on Sirius XM/Blue Collar Radio and her comedy is in rotation every day on Sirius comedy channels. She is currently touring as part of the comedy trio Country Cool, along with headliners Karen Mills and Trish Suhr. She has a comedy special currently streaming on Vid Angel called “So Yummy” and her videos on Dry Bar Comedy have gotten more than 50 million views and growing! Tickets start at $29.50.

With more than 1.8 billion career streams globally, COJO Music/Warner Music Nashville recording artist Cody Johnson has clearly established a rabid following of loyal fans who thirst for his authentic brand of country music. The aptly named “COJO Nation” purchased half a million concert tickets in one calendar year and regularly pack out shows across the country. Johnson sold out 45+ shows in 2019 alone including a sold-out show at historic Ryman Auditorium and RODEOHOUSTON for the second consecutive year. His first major-label release Ain’t Nothin To It skyrocketed to No. 1 on both the Billboard Top Country Albums and All-Genre Digital Sales charts. Also reaching Top 10 on Billboard 200, it became the third-highest pre-added album of all time in the country music genre on Apple Music at the time of release. Johnson’s Platinum-certified “On My Way To You” has recently been named one of NSAI’s “10 Songs I Wish I’d Written 2020” and marks his first Top 10 hit at country radio. Now he returns to country airplay with his latest single “Dear Rodeo,” which MusicRow described as “a beautiful piece of work,” going on to state Johnson “just might be the future of real country music.” Co-written by Johnson and Dan Couch as a very personal tribute to Johnson’s previous bull-riding career, the reflective song struck a chord with fellow rodeo rider Reba McEntire, prompting the two to record a poignant duet version also available everywhere now. The country star is known for his explosive live shows and electrifying stage presence. Even prior to signing a joint venture with Warner Music Nashville, Johnson’s independently released project reached No. 2 on Billboard’s Top Country Albums chart and No. 11 on the Billboard 200 Chart. With ACM and CMA nominations to his name, Johnson has been recognized as one of The Tennessean’s “Nashville’s Next Stars,” MusicRow’s “2019 Next Big Thing,” iHeartRadio’s “Artists to Watch in 2019,” and highlighted on Pandora’s “Artist to Watch 2019” playlist. Tickets start at $35.

From Golden Globe-nominated composer Brian Byrne (Heartbeat of Home) comes a majestic new musical score for a brand-new Irish dance production from Herbert W. Armstrong College and Armstrong Dance. Celtic Throne explores the ancient origins of Irish step dance and celebrates the millennia‐long journey of a music-and-dance-loving people as they migrate from the ancient Near East to Ireland, Scotland, England and the United States. Infused with innovative choreography, dazzling costumes and spectacular lighting and projection, Celtic Throne is Armstrong’s most electrifying, edge-of-the-seat production to date. “Celtic Throne combines Byrne’s powerful, cinematic musical score with hard- and soft-shoe Irish dancing, all set against epic imagery of Ireland, the Scottish Highlands, scenes from the British Empire, and traditional America. This show is a stonking celebration of the British Isles and the United States. It is guaranteed to leave audiences thrilled and inspired,” said codirector Brad Macdonald. “Bring the entire family for an unforgettable experience!” Tickets start at $50.

The School of Rock is a performance-based music school with two locations in the Nashville area that teaches guitar, bass, keyboards, drums and vocals in a performance environment to students of all skill levels. Students will be performing a selection of songs from over 50 years of rock-n-roll from its upcoming performance season which includes music from all genres of music—from punk and disco from the ’70s to the hair band genre in the ’80s to some of today’s progressive bands and top artists. This year’s performance will benefit the Monroe Carell Jr’s Children Hospital at Vanderbilt which is one of the nation’s leading children’s hospital that provides care regardless of a family’s ability to pay. Rich Redmond (drummer for country star Jason Aldean) will host and emcee this third annual event. Tickets start at $12.

With ten multi-platinum albums and 16 Top 30 hits, Foreigner is universally hailed as one of the most popular rock acts in the world with a formidable musical arsenal that continues to propel sold-out tours and album sales, now exceeding 80 million. Responsible for some of rock and roll’s most enduring anthems including “Juke Box Hero,” “Cold As Ice,” “Hot Blooded,” “Waiting For A Girl Like You,” “Feels Like The First Time,” “Urgent,” “Head Games,” “Say You Will,” “Dirty White Boy,” “Long, Long Way From Home” and the worldwide #1 hit, “I Want To Know What Love Is,” Foreigner still rocks the charts more than 40 years into the game with massive airplay and continued Billboard Top 200 album success. Streams of Foreigner’s hits are approaching 10 million per week. More about Foreigner—including individual bandmember bios, tour dates, merchandise, and more—can be found on the band’s official website, foreigneronline.com. Tickets start at $49.50.

30 miles west of El Paso, surrounded by 3,000 acres of pecan orchards and only a stone’s throw from the Mexican border, the band Big Thief (a.k.a. Adrianne Lenker, Buck Meek, Max Oleartchik, and James Krivchenia) set up their instruments as close together as possible to capture their most important collection of songs yet. The band had only just finished work on their 3rd album, U.F.O.F. -“the celestial twin”- days before in a cabin studio in the woods of Washington State. Now it was time to birth U.F.O.F.’s sister album -“the earth twin”- Two Hands. Anybody who has borne witness to Big Thief in the wild will find songs they recognize on Two Hands. Much of the album’s tracks (“The Toy”, “Those Girls”, “Shoulders”, “Not”, “Cut My Hair”) have been live staples for years. “Two Hands has the songs that I’m the most proud of; I can imagine myself singing them when I’m old,” says Adrianne. “Musically and lyrically, you can’t break it down much further than this. It’s already bare-bones.” With raw power and intimacy, Two Hands folds itself gracefully into Big Thief’s impressive discography. This body of work grows deeper and more inspiring with each new album. While you listen, let your own two hands rest in front of your body with palms facing inward and see what power grows between them. Tickets start at $29.50.

Over 3 Million records sold and 3 Grammy® Nominations. Crowder’s first solo album, Neon Steeple, debuted at No. 8 on the Billboard 200, was named iTunes 2014 Christian Album of the Year, garnered multiple radio hits, two Grammy® nominations, a Grand Ole Opry debut, a Dove Award and multiple nods and numerous K-LOVE Fan Award Nominations. American Prodigal, the awaited Grammy® nominated follow-up album released in 2016, landed at No. 1 on the Christian & Gospel Album Chart, No. 3 on the Digital Albums Chart, No. 5 on the Top Albums Billboard Chart and No. 12 on the Top 200 Billboard Chart. The song “All My Hope” brought Crowder a No. 1 radio single, in addition to two Top 10 singles prior to that from American Prodigal. This record has also earned the solo artist a Dove Award, six Dove Award nominations, and two more K-LOVE Fan Award nominations. As an artist, Crowder continues to challenge preconceived boundaries and engages listeners in a way that is deeply affecting. The brand-new album, I Know A Ghost, is now available everywhere. Crowder’s new music has shown immediate connection as “Red Letters,” the first song released to radio, continues to gain support from stations across the country. Tickets start at $25.

2021 brings the release of dodie’s eagerly anticipated debut album Build A Problem. At just 26, dodie has already done a lot of living. Some of that has played out online as she made a name for herself as a singer and writer, amassing millions of fans with her disarmingly honest videos and affecting, intimate singing style. She has scored two top-ten EPs, headlined and sold out London’s Roundhouse, and the Hollywood Palladium and New York’s Terminal 5, and become an ambassador for Depersonalisation charity Unreal. Tickets start at $29.50.