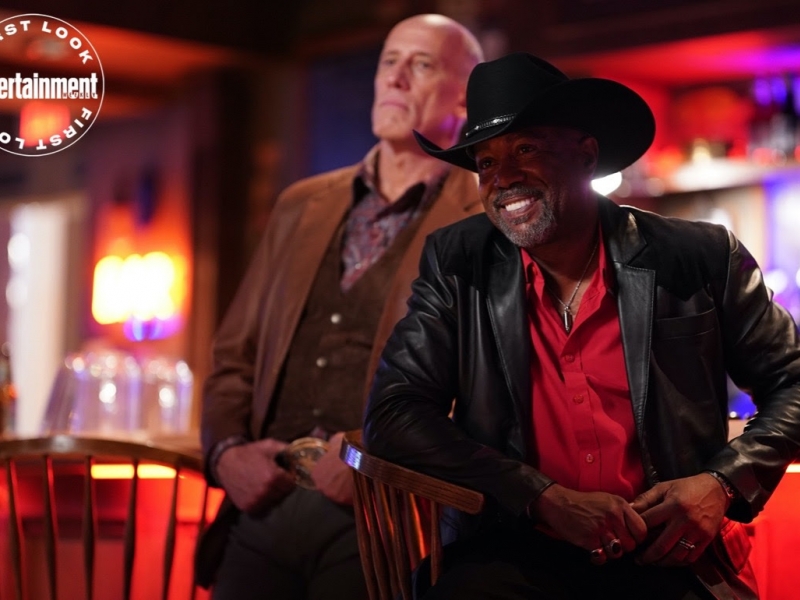 NASHVILLE, Tenn. – Having recently celebrated the Diamond-certification of “Wagon Wheel” as well as his 10 No. 1 Country singles, three-time GRAMMY Award winner Darius Rucker joins “TODAY” anchor Craig Melvin this Friday, Nov. 4, to discuss the significance of such major milestones and to reveal an exclusive update about his forthcoming new music. Tune in to NBC in the 8 a.m. ET and 9 a.m. ET hours to watch the interview.

Rucker will also make his return as an actor during tonight’s episode of “Big Sky: Deadly Trails” on ABC. In the role of Possum, Rucker guest stars as a hired gun who works at night like his nocturnal namesake, partnering with expert tracker Tex (Lyle Lovett), for better or worse, on this particular job. Centered around private detective Cassie Dewell (Kylie Bunbury), undersheriff Jenny Hoyt (Katheryn Winnick) and newly appointed sheriff Beau Arlen (Jensen Ackles) as they maintain order in Helena, Mont. with their unparalleled investigative skills, “Big Sky: Deadly Trails” features a local backcountry trip led by charismatic outfitter Sunny Barnes (Reba McEntire) gone awry, as the trio faces their most formidable mystery yet – in which no camper can be trusted and where danger lurks around every jagged rock and gnarled tree. Tune in at 10 p.m. ET/PT to watch the drama unfold.

About Darius Rucker
Rucker first achieved multi-Platinum status in the music industry as lead singer and rhythm guitarist of the GRAMMY Award-winning band Hootie & the Blowfish, who have sold more than 25 million albums worldwide including their Double Diamond-certified (21x Platinum) debut Cracked Rear View, which remains among the Top 10 best-selling studio albums of all time. Since releasing his first Country album in 2008, Rucker has earned a whole new legion of fans with four No. 1 albums on the Billboard Country chart, including RIAA Platinum-certified Learn to Live and True Believers, plus 10 No. 1 singles at Country radio and 11 Gold, Platinum or multi-Platinum certified hits. Rucker was inducted as a Grand Ole Opry member in 2012 and in 2014 he won his third career GRAMMY Award for Best Solo Country Performance with his Diamond-certified (11x Platinum) version of Old Crow Medicine Show’s “Wagon Wheel,” one of the Top 5 best-selling Country songs of all time. He co-hosted the 54th annual CMA Awards in 2020 and topped the charts at Country radio once again with “Beers And Sunshine” in 2021. New songs “Same Beer Different Problem” and “Ol’Church Hymn” (featuring Chapel Hart) are available everywhere now as Rucker puts the finishing touches on a forthcoming album.

As a lifelong philanthropist, Rucker co-chaired the capital campaign that generated $150 million to help build the new MUSC Shawn Jenkins Children’s Hospital in his hometown of Charleston, S.C. and has raised over $3 million for St. Jude Children's Research Hospital through his annual Darius & Friends benefit concert and golf tournament. In addition, Rucker has advocated for over 200 charitable causes supporting public education and junior golf programs in South Carolina through the Hootie & the Blowfish Foundation and serves as a National Chair for the National Museum of African American Music in Nashville, Tenn. Rucker is also an avid sports fan, with his NFL x Darius Rucker Collection by Fanatics apparel line available at NFLshop.com, and he is part of the Music City Baseball investment group working to bring an MLB team to Tennessee in addition to serving as a partner at the MGC Sports & Entertainment agency.