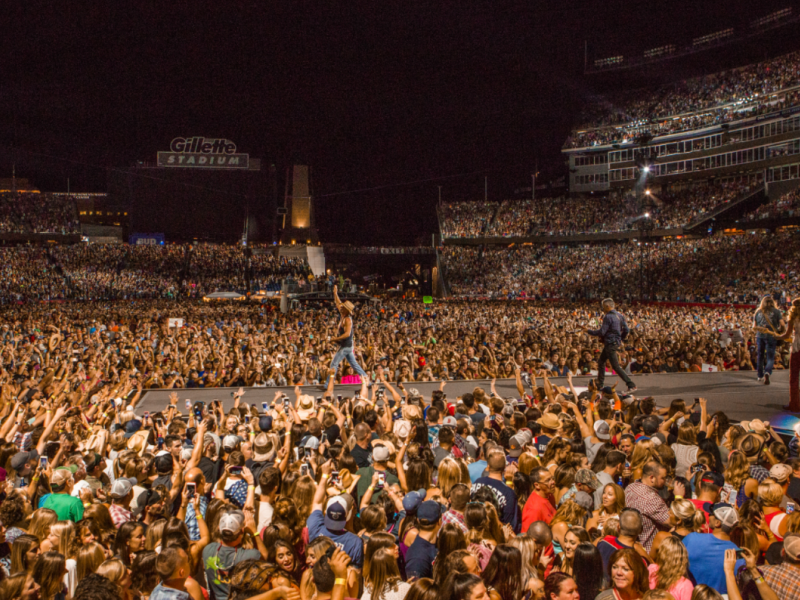 TAMPA, Fla. – Long before people start rolling into the parking lots and setting up No Shoes Nation for the first time in three years, the behind-the-scenes people have been working for days. In many ways, the start of any full-on Kenny Chesney tour begins when the bright red trucks start rolling towards opening day – carrying sound equipment, lighting rigs, all the construction pieces needed to erect a stage big enough to hold a show designed for America’s football stadiums. “And the first trucks are headed to Tampa,” Chesney said, “they’re rolling South, which means the Here And Now 2022 Tour is really about to happen!” With all the scheduling, rescheduling, routing, waiting and wanting to bring No Shoes Nation back together under the open skies and in a single stadium, on Saturday, April 23 at Tampa’s Raymond James Stadium, the pirate flag will be raised on the stadium’s signature ship. Having been apart for so long, the anticipation is high. And the steel is already being loaded, the framing for the 220-foot wide stage that ascends almost three stories into the air being built. Hundreds of tons being bolted tight, fit together and raised by heavy industrial equipment, it is the first sound heard before the guitars and drums can even think about coming off the truck. “I got some pictures from the stadium this morning of work starting to happen,” Chesney says, “and it made me happier than I even thought it would. There’s a very special thing that happens when we hit that stage, a rush that is absolutely indescribable, and I didn’t quite have that today, but my heart sure pumpd when I saw it.” With supply-side issues very much a factor this season, Team Chesney is sharing resources – specifically steel – with several other major tours out on the road this summer. By understanding what it takes to put up a massive stadium-sized stage, Chesney’s working with several other tours in place to share metal. “We are all citizens of music,” Chesney explains. “Having been away from the fans for so long, the more we can do to bring music to the people who love it, who breathe it, who find release and love and joy in it, the better the world’s going to be. I know how much better I felt just playing in a space with the band; I can’t imagine how great it’s going to feel once we get into that first song, all singing together.” With reigning Country Music Association and Academy of Country Music Female Vocalist of the Year Carly Pearce, five-time ACM and four-time CMA Group of the Year Old Dominion and four-time GRAMMY Country Duo/Group Performance winners Dan + Shay, the Here And Now 2022 Tour presented by Blue Chair Bay Rum and fueled by MARATHON is in the final walk-up to the very first notes of music.  Rumor has it – once again – Chesney has his team looking for more tickets; something says they’ll find ’em, too.