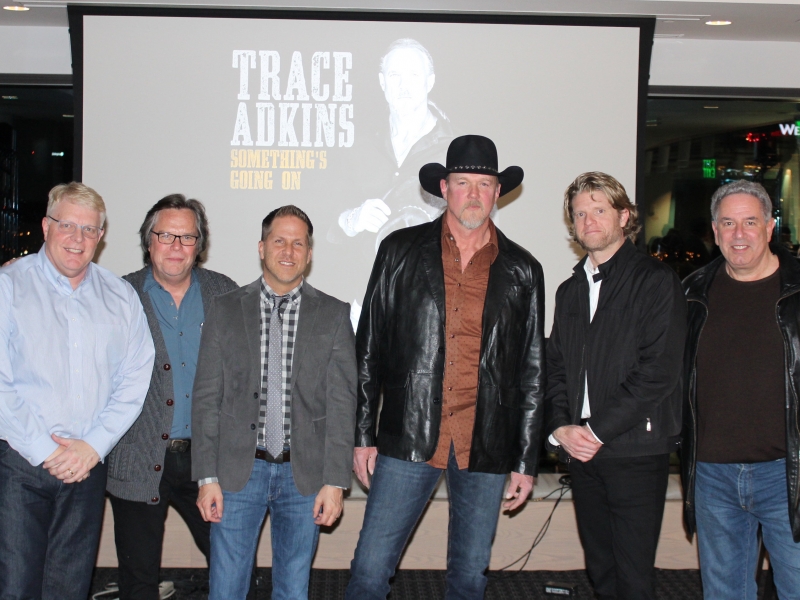 NASHVILLE, Tenn– With the new Nashville skyline serving as a backdrop and fitting metaphor, Trace Adkins previewed new music for gathered members of the media and industry Thursday night at the Steps at WME as he prepares to release his latest album, Something’s Going On.

The newly-signed WME entertainer and actor talked about his first new album since 2013, due March 31 from new label BBR Music Group/Wheelhouse Records, as well as his upcoming multi-city tour, 12th USO Tour appearance this summer and the number of milestones he’s had in his dynamic career. He’s also set to co-host NBC’s TODAY on Wednesday, Feb. 8.

The Louisiana native debuted new song “Watered Down,” a powerful ballad about the changes life brings that will serve as Adkins’ lead single during a 45-minute appearance at the downtown Nashville offices of WME, hosted by CMT’s Cody Alan.

The song, available now and written by Matt Jenkins, Trevor Rosen and Shane McAnally, is about slowing down at mid-life in an attempt to survive the excesses of youth and is very personal for Adkins. “We still love our whiskey,” Adkins sang, “but now it’s just a little watered down.”

“When I heard this song, I was like, ‘Well, that’s my current state in a nutshell,” Adkins told the crowd. “That’s where I’m at. A man that’s lived his life like I have, at some point you face the reality that you have to temper your vices. You have to calm down. I’m still crazy – you’ve just got to temper it a little bit.”

The one area of his life the tall baritone with the ponytail and signature black cowboy hat isn’t slowing down is his career as he celebrates his 25th year in Nashville. Adkins told the crowd of his first trip to Nashville – an appearance on the Wild Turkey Battle of the Country Bands, around 1985.

“We absolutely choked and we went back to Texas, and I don’t think I came back to Nashville until 1992,” Adkins said.

Twenty-five years and 11 million albums later Adkins is embarking on the latest chapter of his career with the Mickey Jack Cones-produced Something’s Going On, this year’s tour and his USO Tour of Spain and Italy.

About Trace Adkins
Towering baritone Trace Adkins has sold more than 11 million albums and charted more than 20 singles in his 25 years in Nashville, a remarkable run for one of country music’s most easily identifiable stars. The Louisiana native is preparing to release his 12th studio album, Something’s Going On, on March 31 on BBR Music Group / Wheelhouse Records. A three-time GRAMMY Award nominee, Adkins has won three Academy of Country Music Awards, including the 2009 Single of the Year Award for “You’re Gonna Miss This” and Vocal Event of the Year with Blake Shelton for “Hillbilly Bone” in 2010. Adkins is a member of the Grand Ole Opry and also is an accomplished actor with small roles in several films and television shows, author and spokesman for the Wounded Warrior Project and The American Red Cross, for whom he raised more than $1.5 million dollars as winner of NBC’s All-Star Celebrity Apprentice. In recent years, Adkins has performed for our service members across 11 USO Tours, with his 12th scheduled for spring 2017. In his 2007 autobiography, A Personal Stand: Observations and Opinions from a Freethinking Roughneck, he recounted his rise to fame, brushes with death, and battles with personal demons. Adkins has played a tough-as-nails biker in The Lincoln Lawyer (starring Matthew McConaughey), a desperate father in Deepwater Horizon (starring Mark Wahlberg) and a wise oracle of a tattoo artist in the family friendly film Moms' Night Out (starring Patricia Heaton, Sean Astin, Sarah Drew). Adkins has five daughters.