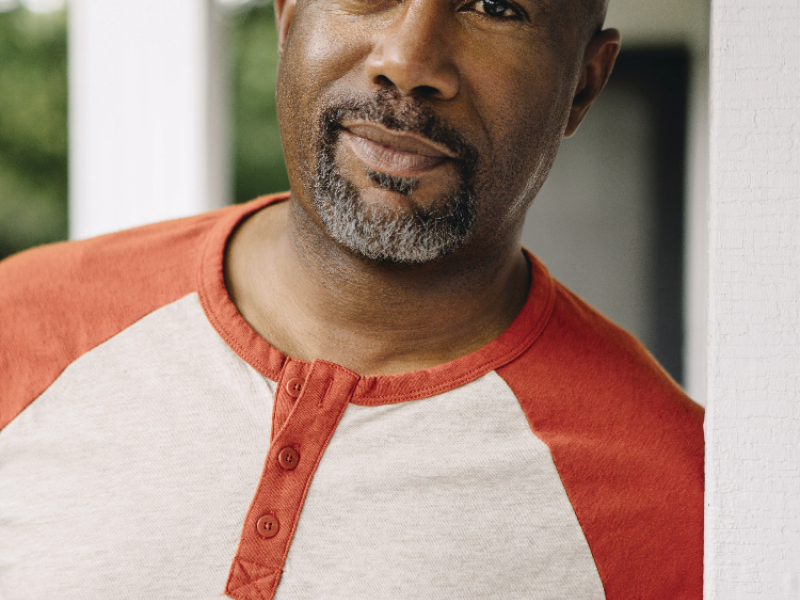 Darius Rucker returns to the Ryman Auditorium with an all-star lineup of friends on Monday, June 4 to continue his nearly decade-long effort to raise funds for St. Jude Children’s Hospital, which is leading the way the world understands, treats and defeats childhood cancer and other life-threatening diseases.

The fan-favorite “Darius and Friends” benefit has raised more than $1 million over the years and looks to continue the trend this year with the support of Trace Adkins, Lauren Alaina, Bobby Bones, Ashley McBryde and Rachel Wammack.

“St. Jude is doing incredible work for patients and families every single day, so whatever we can do to help them is a no-brainer for me,” said Rucker. “We’re so appreciative of these artists coming out to help us kick off CMA Fest week for such a good cause.”

Rucker recently achieved his ninth career No. 1 on the country charts with “For The First Time” and will co-headline the Summer Plays On Tour this summer with Lady Antebellum before heading overseas to the United Kingdom for a string of shows this fall.

About St. Jude Children’s Research Hospital®
St. Jude Children’s Research Hospital is leading the way the world understands, treats and defeats childhood cancer and other life-threatening diseases. Its purpose is clear: Finding cures. Saving children.® It is the only National Cancer Institute-designated Comprehensive Cancer Center devoted solely to children. Treatments invented at St. Jude have helped push the overall childhood cancer survival rate from 20 percent to more than 80 percent since the hospital opened more than 50 years ago. St. Jude won’t stop until no child dies from cancer. St. Jude freely shares the discoveries it makes, and every child saved at St. Jude means doctors and scientists worldwide can use that knowledge to save thousands more children. Families never receive a bill from St. Jude for treatment, travel, housing or food – because all a family should worry about is helping their child live. Join the St. Jude mission by visiting stjude.org, liking St. Jude on Facebook, following St. Jude on Twitter @stjude and subscribing to itsYouTube channel.

About Darius Rucker
Rucker first attained multi-Platinum status in the music industry as the lead singer and rhythm guitarist of GRAMMY award-winning Hootie & the Blowfish. Since releasing his first country album in 2008, he has celebrated four summits to the top of the Billboard Country albums chart and earned a whole new legion of fans. In 2014, Rucker won his third career GRAMMY award for Best Solo Country Performance for his 4x Platinum selling cover of Old Crow Medicine Show’s “Wagon Wheel,” off his album, True Believers. Rucker’s first two country albums, Learn To Live and Charleston, SC 1966 produced five No. 1 singles including “Come Back Song,” “This,” “Alright,” “It Won’t Be Like This For Long,” and “Don’t Think I Don’t Think About It.” Southern Style, his fourth studio country album, featured his seventh No. 1 single “Homegrown Honey,” co-written by Rucker, label mate Charles Kelley of Lady Antebellum, and Nathan Chapman. Rucker’s latest album on Capitol Records Nashville, When Was The Last Time, features “If I Told You” and “For The First Time," his eighth and ninth No. 1s on country radio.

About Trace Adkins
Towering baritone Trace Adkins has sold more than 11 million albums and charted more than 20 singles in his 25 years in Nashville, a remarkable run for one of country music’s most easily identifiable stars. The Louisiana native recently released his 12th studio album, Something’s Going On, on BBR Music Group / Wheelhouse Records. A three-time GRAMMY Award nominee, Adkins has won three Academy of Country Music Awards, including the 2009 Single of the Year Award for “You’re Gonna Miss This” and Vocal Event of the Year with Blake Shelton for “Hillbilly Bone” in 2010. The Grand Ole Opry member is also an author and spokesman for the Wounded Warrior Project and The American Red Cross, for whom he raised more than $1.5 million dollars as winner of NBC’sAll-Star Celebrity Apprentice. In recent years, Adkins has performed for our service members across 12 USO Tours. In his 2007 autobiography, A Personal Stand: Observations and Opinions from aFreethinking Roughneck, Adkins recounted his rise to fame, brushes with death, and battles with personal demons. Adkins has also acted in multiple films and television shows, playing a tough-as-nails biker in The Lincoln Lawyer (starring Matthew McConaughey), a desperate father in Deepwater Horizon (starring Mark Wahlberg) and a wise oracle of a tattoo artist in the family friendly film Moms' Night Out (starring Patricia Heaton, Sean Astin, Sarah Drew). His most recent role was that of MercyMe’s real-life manager, Brickell, in the box office smash “I Can Only Imagine.” The film was the third biggest selling movie on its opening weekend in America. For tour dates and more information, visit www.traceadkins.com or on Twitter, Facebook and Instagram @TraceAdkins.

About Lauren Alaina
Georgia native Lauren Alaina captured America’s hearts when she competed on Season 10 of American Idol. In 2017, Lauren followed up her No. 1 debuting first album, Wildflower, with the release of the critically-acclaimed sophomore album, Road Less Traveled. The album landed on multiple end-of-year “Best Of” lists including Billboard, Rolling Stone and Amazon, and it became the top-streamed female country album release of the year. Praised as “full of life lessons and uplift” (People), the collection of 12 songs all written by the young star includes Lauren’s first No. 1 smash, “Road Less Traveled,” the Top 25 hit “Doin’ Fine,” and the deeply personal and inspiring, “Three.”The “sassy Southerner with killer pipes” (PARADE) has shared the stage with superstars including Alan Jackson, Carrie Underwood, Luke Bryan and Martina McBride. Lauren recently joined Cole Swindell on the Reason to Drink Tour and is currently on tour with Jason Aldean for this summer’s High Noon Neon Tour. Lauren is this year’s ACM New Female Vocalist of the Year and is currently nominated for three CMT Music Awards including Female Video of the Year for “Doin’ Fine,” Collaborative Video of the Year and Video of the Year for “What Ifs,” the double platinum-selling No. 1 collaboration with her childhood friend, Kane Brown. Lauren is one of CMT’s Next Women of Country and she received her first CMT Music Award for Breakthrough Video of the Year with her No. 1 hit “Road Less Traveled.”  Following the release of Road Less Traveled, Lauren has earned nominations for the ACM Awards, CMA Awards, CMT Music Awards, Teen Choice Awards, Radio Disney Awards and Billboard Music Awards.For more information, visit www.LaurenAlainaOfficial.com.

About Bobby Bones
Dubbed "The most powerful man in country music" (Forbes), Bobby Bones' nationally syndicated radio show The Bobby Bones Show reaches millions of listeners on more than 100+ stations and recently garnered its third ACM Award for National On-Air Personality of the Year, also earning a 2017 Country Music Association award for National Broadcast Personality of the Year. With a knack for recognizing and launching new talent on his “triumphant” (Billboard) The Bobby Bones Show, Bones brought his musical mastery to this season of ABC’s American Idol. Mentoring the top 24 contestants, Bones worked with each contender, challenging them to reach new heights with their artistry and performances. His popular podcast, BobbyCast, a "treasure trove of unusually candid anecdotes...” (Washington Post), recently surpassed 100 episodes and has been downloaded more than 2 million times. Bones sits down with top artists and songwriters - Kelsea Ballerini, Dierks Bentley, John Mayer and Chris Stapleton to name a few - for in-depth personal interviews. The podcast’s overwhelming success has paved the way for Bones to launch the Nashville Podcast Network, an eclectic collection of seven podcast from a variety of Nashville-savvy hosts, giving listeners an inside look at the lifestyle and pop culture in Nashville. Bones is set to release his second book "FAIL UNTIL YOU DON’T: FIGHT. GRIND. REPEAT." on June 19, which hit #1 on Amazon upon becoming available for pre-order. The book follows his debut memoir "BARE BONES: I’M NOT LONELY IF YOU’RE READING THIS BOOK" (Dey Street Books), which landed at #1 on the New York Times, USA Today and Wall Street Journal Bestsellers Lists.

About Ashley McBryde
Lauded by The New York Times  as “an alluringly flexible singer, fluent in classic country, blues and Southern rock, with a voice that moves easily from tender to tough,” Ashley McBryde caught the attention of some of Nashville’s most raucous entertainers, landing her dates opening for Eric Church, Chris Stapleton, and, most recently, Miranda Lambert and Luke Combs. The Washington Post raves, "McBryde's blue-collar storytelling and straightforward singing set her apart," including a set during her debut on the Grand Ole Opry stage, notably sharing "Girl Goin' Nowhere," the seminal title track from her March 30, 2018 Jay Joyce-produced LP for Atlantic Records/Warner Nashville. Girl Going Nowhere was the biggest debut by a solo country artist this year and earned the Arkansas native critical acclaim from The New York Times, The Washington Post, Rolling Stone, Variety and more. McBryde’s current single, “A Little Dive Bar in Dahlonega,” is in the Top 30 at Country radio and has already notched the No. 1 slot on SiriusXM's The Highway Top 30. Learn more about McBryde at AshleyMcBryde.com or follow her on Facebook at https://www.facebook.com/AshleyMcBryde, Instagram @ashleymcbryde and Twitter at @AshleyMcBryde.

About Rachel Wammack
Rachel Wammack, a 23-year old native from Muscle Shoals, Alabama, describes her sound as the trifecta of Country, Soul and Adult Pop. Being influenced heavily from the rich music history of her hometown, Rachel had no choice, but to be shaped and sharpened by the artistic gusto that comes when those sounds merge. Like her key influences before her; Adele, Otis Redding, Carrie Underwood and Sam Smith, Rachel honed her craft not only as vocalist, but as a songwriter. At the age of 12, Rachel wrote her first song. Throughout the following adolescent years Rachel expressed her art in her songwriting, storytelling, playing in the High school band, and pursuing a degree in professional writing. All artists take different paths, but with Rachel, her path chose her. At the age of 17 she was discovered by a Sony Music Nashville while Rachel was performing at a fine cuisine, piano restaurant in Muscle Shoals. Five years and many written songs later, Rachel would receive a record deal from Sony Music Nashville. In April 2018 Rachel released her self-titled, four song, EP via the RCA Records Nashville imprint, giving her ever growing fan base a taste of the music that’s still to come. The Rachel Wammack EP proves that the young singer/songwriter is standing at the starting line of what promises to be an exciting, self-fulfilling and stunning career.