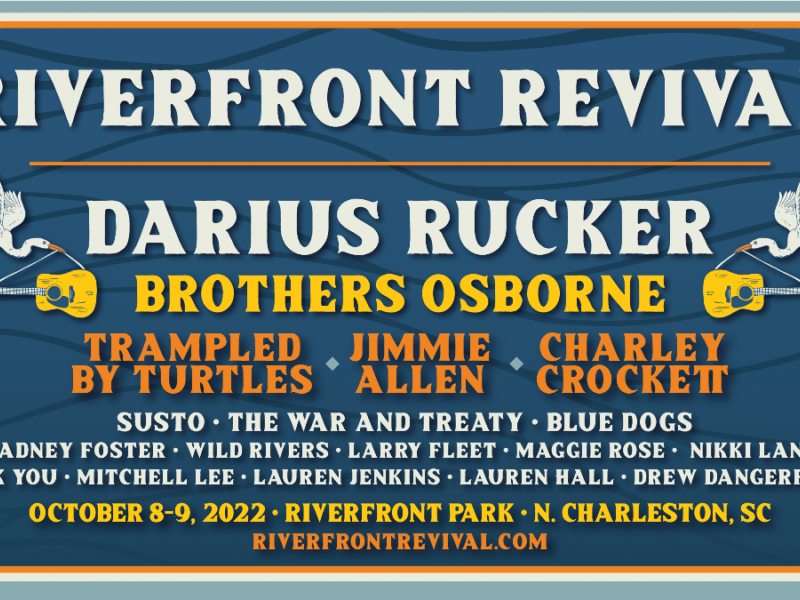 CHARLESTON, S.C. – Multi-Platinum entertainer Darius Rucker has partnered with one of the Southeast’s leading entertainment agencies, SRE Entertainment, to fulfill his longtime dream of bringing a unique music festival to his beloved hometown of Charleston, S.C. Set to take place Saturday, October 8 and Sunday, October 9 at North Charleston’s beautiful Riverfront Park, the family-friendly Riverfront Revival music festival presented by Discover South Carolina will feature curated offerings of the Lowcountry’s best food, libations, art and culture along with music performances mixing the best of country and rock.
In addition to a headlining performance from Rucker himself, the two days of entertainment will also include performances by Brothers Osborne, Trampled By Turtles, Jimmie Allen, Charley Crockett, SUSTO and more across two stages from 1-11 p.m. daily.

“Anyone who knows me knows how much I love Charleston,” shares Rucker. “For years now, I’ve had this bucket list dream of bringing together a bunch of friends to perform in a way that also showcases this incredible city and all it has to offer. I can’t wait to see it become a reality this fall – and I hope the fans are as excited as we are!”

“Riverfront Revival will be the perfect culmination of feel-good music across genres set against the beautiful backdrop of the Cooper River,” adds SRE Entertainment Partner Rob Lamble. “We’re thrilled to bring a new fall music tradition to the Holy City, and are honored to be doing so with Darius Rucker and his team.” “Darius is a home-grown star with a genuine love for his state, making him an incredible ambassador for South Carolina,” notes Duane Parrish, Director of the South Carolina Department of Parks, Recreation & Tourism. “We are all looking forward to celebrating South Carolina’s Lowcountry and welcoming thousands of visitors to this one-of-kind music festival in October.”
General admission tickets start at $124.50 per person (plus fees), with payment plans starting at just $25 down. VIP tickets start at $399.50 per person (plus fees), with payment plans starting at $50 down. VIP ticket holders will have access to a dedicated entrance lane, priority viewing areas at both stages, VIP lounge areas, premium restrooms, a dedicated bar and more.

Part of Rucker’s passion for his hometown includes an innate desire to give back to the community, instilled by his late mother who was a nurse at the Medical University of South Carolina (MUSC). He has raised millions of dollars for the hospital throughout his career and will continue to do so via Riverfront Revival, with $1 of each ticket sold supporting the MUSC Arts in Healing program. MUSC’s board-certified and registered Arts in Healing therapists work with children and adults to identify, explore and transform emotional, psychological, physical and spiritual difficulties through Clinical Art and Music Therapy.

“There is a national children’s mental health crisis and South Carolina is no exception,” shares Mark Scheurer, M.D., Chief, Children’s & Women's Integrated Center of Clinical Excellence at MUSC. “The MUSC Arts in Healing program provides a safe and tangible method for our patients and families to address underlying fears, anxieties and concerns in the clinical environment. The joy and healing the therapy team helps create is possible because of our community and philanthropic-minded people like Mr. Rucker.”

Artist images and additional assets are available for download HERE. About Darius RuckerRucker first achieved multi-Platinum status in the music industry as lead singer and rhythm guitarist of the GRAMMY Award-winning band Hootie & the Blowfish, who have sold more than 25 million albums worldwide including their Diamond-certified debut Cracked Rear View, which remains among the Top 10 best-selling studio albums of all time. Since releasing his first Country album in 2008, Rucker has earned a whole new legion of fans with four No. 1 albums on the Billboard Country chart, including RIAA Platinum-certified Learn to Live and True Believers, plus 10 No. 1 singles at Country radio and 11 Gold, Platinum or multi-Platinum certified hits. Rucker was inducted as a Grand Ole Opry member in 2012 and in 2014 he won his third career GRAMMY Award for Best Solo Country Performance with his 9x Platinum version of Old Crow Medicine Show’s “Wagon Wheel,” one of the top five best-selling Country songs of all time. He co-hosted the 54th annual CMA Awards in 2020 and topped the charts at Country radio once again with “Beers And Sunshine” in 2021. Follow up single “My Masterpiece” is available everywhere now as Rucker puts the finishing touches on a forthcoming album. As a lifelong philanthropist, Rucker co-chaired the capital campaign that generated $150 million to help build the new MUSC Shawn Jenkins Children's Hospital in his hometown of Charleston, S.C. and has raised millions of dollars for St. Jude Children's Research Hospital through his annual Darius & Friends benefit concert and golf tournament. Rucker has also advocated for over 200 charitable causes supporting public education and junior golf programs in South Carolina through the Hootie & the Blowfish Foundation and serves as a National Chair for the National Museum of African American Music in Nashville, Tenn. For more information, visit www.dariusrucker.com and follow on social media @DariusRucker.

About SRE Entertainment
SRE Entertainment is comprised of Rob Lamble, owner of Ear For Music; Ean Wolf, CEO at WE Music, and entertainment industry veteran Taylor Shomaker. The three partners started working together at the inaugural High Water Music Festival in 2017. The team has formed a very close friendship and has continued to work together on many concerts and festivals throughout the Southeast.About the South Carolina Department of Parks, Recreation and Tourism – Discover South CarolinaThe South Carolina Department of Parks, Recreation and Tourism is a cabinet agency assigned to operate and manage South Carolina's 47 state parks, market the state as a preferred vacation destination and provide assistance to communities to develop recreation assets. Explore the official tourism site of South Carolina and discover all the rich history, sandy beaches and family attractions a South Carolina vacation has to offer at DiscoverSouthCarolina.com.###
Media Contacts for Darius Rucker:
Ebie McFarland | Janet Buck
Essential Broadcast Mediaebie@ebmediapr.com | janet@ebmediapr.com
(615) 327-3259