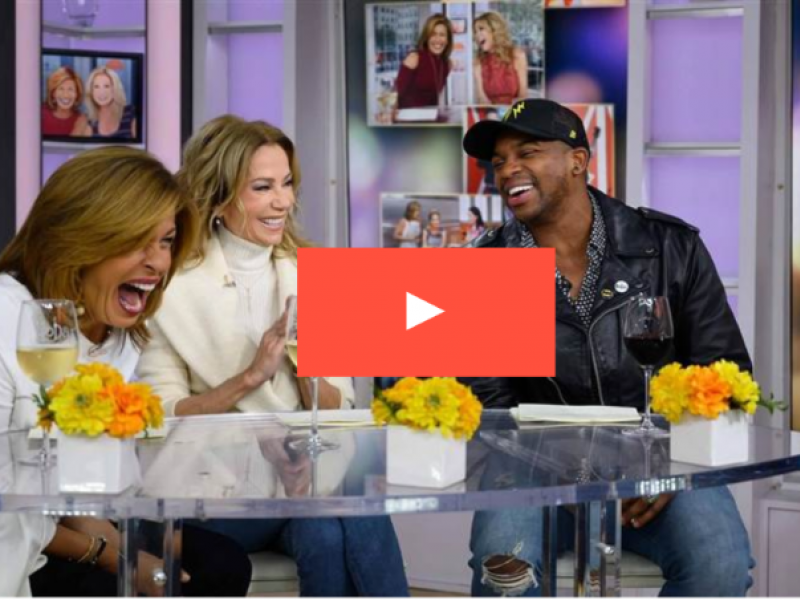 On the heels of his first full-length release Mercury Lane, with his debut single “Best Shot” earning the biggest point increase of the week on the Country radio charts (currently at No. 3 and climbing), breakout country star and Billboard Emerging Artist Jimmie Allen took his talents to New York not once, not twice, but three times in the past four weeks. The 33-year-old Delaware native has performed, commentated and now, as of this morning, co-hosted the fourth hour of NBC’s TODAY with Kathie Lee and Hoda.

“It's such an incredible honor to join TODAY as a co-host," shares the "Best Shot" singer. "I am pinching myself right now just to make sure this is real life."

Over the course of an hour, Allen and his co-hosts got a lesson in manners from Thomas Farley, reminisced on the last 32 years of PEOPLE’s “Sexiest Man Alive” issue and sampled a few fall wine favorites under $20 with wine experts Leslie Sbrocco and Ray Isle in a unique “He Said, She Said” segment.

Allen will return to TODAY for a fourth time on November 28 for a panel segment of “Guys Tell All” with Kathie Lee and Hoda.

The artist that Billboard describes as a “honey-voiced crooner” first performed his smash single “Best Shot” on TODAY at the beginning of October. The single, characterized by Rolling Stone as “a soulful, acoustic love song” has claimed the No. 1 spot as the most Shazamed song in Country music for the past six consecutive weeks and has accumulated more than 55 million streams.

Allen’s label debut project, Mercury Lane, landed the Delaware native a Top 10 spot on Billboard’s Country Albums chart the week of its release and kicked off a stretch of appearances up and down the East Coast before Allen joined Chase Rice on his Lambs & Lions UK Tour. Mercury Lane, produced by Ash Bowers and Eric Torres, was named after the street where Allen grew up. Having co-written eight of the 15 tracks, the album pays homage to the people and places that paved the way for the singer’s budding music career.

Fans will have a chance to see Allen on the road this winter playing direct support to Scotty McCreery on his Seasons Change Tour and playing select dates on Kane Brown’s Live Forever Tour.

About Jimmie Allen:
The epitome of the phrase “persistence pays off,” Jimmie Allen laid it all on the line to make his dreams a reality. Now signed to BBR Music Group’s Stoney Creek Records, Allen’s debut single “Best Shot” is a certified hit, claiming the spot as the #1 Most Shazamed song in the format for six consecutive weeks, as it continues to climb up the Top 5 on Country radio. On October 12th, Allen released his hotly-anticipated debut album, Mercury Lane, named in tribute to the street he grew up on and the origin of his incredible journey. Featuring a cutting-edge mix of country, rock, R&B, and pop, Mercury Lane draws upon the influence his family and small-town upbringing of the critically-acclaimed rising star.

The Southern Delaware native’s talent for songwriting is undeniable, having written a song that was featured in a Super Bowl commercial and appearing in a Diet Coke ad with megastar Taylor Swift. “Blue Jean Baby,” off his debut self-titled EP, immediately caught the attention of country music fans and critics alike with its soulful groove— rocketing it to the top of digital playlists, across all genres. After introducing his music at festivals across the country this summer, this fall Allen will hit the road once again to share the stage with Chase Rice, Kane Brown, and Scotty McCreery. The hot newcomer has already been heralded as one of the top “artists to watch in 2018” by Rolling Stone, Billboard, Pandora, Sounds Like Nashville, NY Country Swag, Country Music Rocks and New England Country Music has earned spots in CMT’s “18 for 2018” Listen Up program, Bobby Bones’ Class of 2018.