TAYLOR TOMLINSON ANNOUNCES THE HAVE IT ALL TOUR FOR FALL 2022 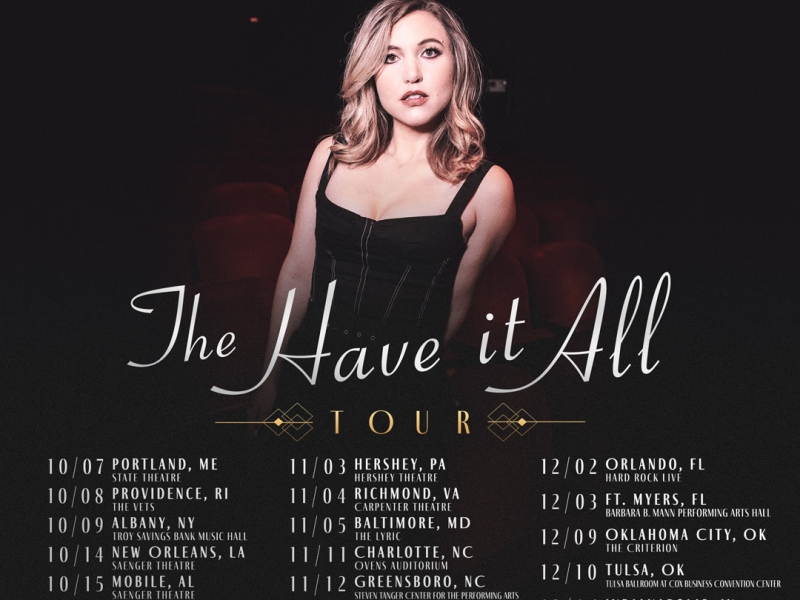 Tickets on Sale June 10; Tour Kicks Off Oct. 7
Comedian to Appear in 20+ Cities Across U.S.

LOS ANGELES, Calif. – As her new hour-long Netflix special “Look At You” tops critics lists for 2022, comedian Taylor Tomlinson is bringing her unflinching candor and biting wit to theaters this fall on The Have it All Tour. Tickets to catch the red-hot comedian on stage this fall go on sale Friday, June 10 at 10 a.m. local time at ttomcomedy.com.

“This new hour is all about how frustrating it can be trying to have both personal and professional success. So often your personal life is going well, but your career won’t take off,” shares Tomlinson. “Or your career is going well, but your relationships don’t work out. Everyone wants what they don’t have, the grass is always greener, blah blah blah. Basically, it’s about figuring out if you can ‘have it all’ or if you’re expecting too much.”

Vulture notes, “Watching Tomlinson gives you the same comfort as a [Taylor] Swift concert or a Broadway show that’s been on for years. This is a professional. This performance will be ultraproduced. You do not need to be anxious.”

Beginning Oct. 7, Tomlinson tackles it all on her The Have it All Tour, appearing in 20 cities across the U.S. from Portland, Maine, to Ft. Myers, Fla., and Charlotte, N.C. to Oklahoma City.

Times’ critic Jason Zinoman adds, Tomlinson’s gift is “making weighty subjects come off as breezy. There’s no way ‘night terrors, panic attacks, bipolar disorder, a dead mother and a disturbingly blunt father, along with suicidal thoughts, should seem this delightful,’” he adds, noting that doing so requires skill and savvy well beyond her years.

ABOUT TAYLOR TOMLINSON
Named to Forbes’ 2021 class of 30 Under 30, Taylor Tomlinson exploded onto the international stage when her first-ever, hour-long special, “Quarter-Life Crisis,” debuted on Netflix in March 2020, just as the world plunged into a once-in-a-century pandemic. The special went on to be named “Best of 2020” by The New York Times, Decider and Paste and earned unanimous critical praise, with Newsweek opining she is “undeniably hilarious.”

Performances on The Tonight Show Starring Jimmy Fallon, Conan, Comedy Central’s Adam Devine’s House Party, and Netflix’s The Comedy Lineup, as well as appearances on The Netflix Afterparty, NBC’s Last Comic Standing, and on podcasts from Conan Needs A Friend to WTF with Marc Maron have all endeared to fans worldwide the woman Mashable calls “whip-smart and spectacularly cynical” and Variety Magazine named one of the Top 10 Comics to Watch at the Just for Laughs Festival. For more on Tomlinson, including upcoming show dates, visit ttomcomedy.com or follow her on Facebook @TaylorTomlinsonComedy and on Instagram and Twitter @taylortomlinson.