TAYLOR TOMLINSON ADDS DATES TO 2021 DEAL WITH IT TOUR 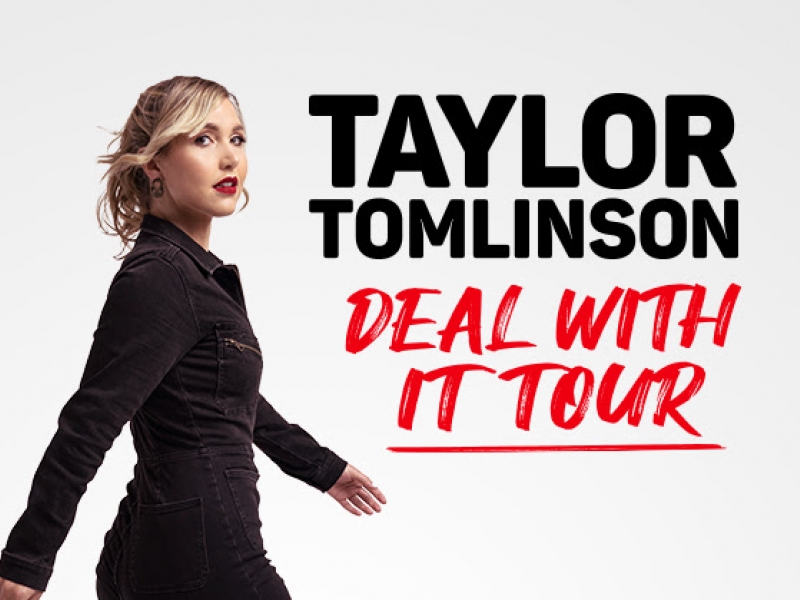 Comedian’s Inaugural Theater Tour to Include Multiple Nights in Minneapolis, Pittsburgh, Austin, Boston and More Tomlinson Set to Make “Late Night with Seth Meyers” Debut on Aug. 24  Tour Kicks Off Sept. 16 and Takes the Comedian Across the US

LOS ANGELES, Calif. – Comedian Taylor Tomlinson’s perspective possesses a degree of wisdom that’s typically earned with age. Named to Forbes’ 2021 class of 30 Under 30, fans got a healthy dose of that wisdom when her first-ever, hour-long special, “Quarter-Life Crisis,” debuted on Netflix in March 2020 just as the world entered into a once-in-a-century pandemic. The special went on to earn unanimous critical praise with the Washington Post calling her “your favorite quarantine-watch” and Newsweek opining she is “undeniably hilarious” and “wise beyond her years.”

The comedian is set to make her “Late Night with Seth Meyers” debut as a guest on the popular NBC nightly chat show on Tuesday, Aug. 24 to discuss returning to the stage with her new Deal With It Tour. The highly anticipated tour kicks off next month and includes 20+ dates across the US with stops at theaters across the country. Launching in Minneapolis, Minn. on Sept. 16, the cross-country trek is adding dates before it even begins with the breakthrough comedian playing multiple shows at theaters in Minneapolis, Minn.; Pittsburgh, Pa.; Austin, Texas; Boston, Mass. and more. Tickets for additional Deal With It tour dates will go on sale to the general public beginning Friday, Aug. 20 at 10:00 am local time.

With what Decider calls “an old-school stand-up polish…” and “…a reverence for the art form,” Tomlinson shares what fans can expect with the new tour, “This hour is definitely darker and more personal – ‘Quarter Life Crisis’ was about being frustrated with where you’re at in life and this new material is about taking a hard look at who you are and how you got that way.”

Tomlinson spent much of 2019 filling clubs across the country on her own headlining tour and in 2020 despite the COVID-19 pandemic continued to grow her fan base with the seven-city, 19 show The Codependent Tour, her first co-headlining tour with fellow comedian Whitney Cummings. The socially distanced, outdoor performances kicked off in Philadelphia with 5 shows and that initial success led to the addition of 14 more shows in six different cities.

Her Netflix special was the culmination of years of writing and performing, and it showed. The set was a masterful display of deft timing, crowd connection, physicality, and smarts. The special went on to be named “Best of 2020” by New York Times, Decider, Paste and more. And Vulture’s “comedian you should and will know” is just getting started!

ABOUT TAYLOR TOMLINSON
Named to Forbes’ 2021 class of 30 Under 30, Taylor Tomlinson exploded onto the international stage when her first-ever, hour-long special, “Quarter-Life Crisis,” debuted on Netflix last March just as the world entered into a once-in-a-century pandemic. The special went on to be named “Best of 2020” by New York Times, Decider, Paste and earned unanimous critical praise with the Washington Post calling her “your favorite quarantine-watch” and Newsweek opining she is “undeniably hilarious.”  Taylor Tomlinson has been honing her craft for more than a decade and at just twenty-seven years old, she possesses a degree of wisdom that’s typically earned with age.

Performances on The Tonight Show Starring Jimmy Fallon, CONAN, Comedy Central's Adam Devine's House Party, and Netflix’s The Comedy Lineup, as well as a top-ten finish in season 9 of NBC’s Last Comic Standing, have all endeared the woman Mashable calls "whip-smart and spectacularly cynical," to a global audience. Variety Magazine named her one of the Top 10 Comics to Watch at the Just for Laughs Festival.  For more on Tomlinson including upcoming show dates when safe to resume touring, visit ttomcomedy.com or follow her on Facebook @TaylorTomlinsonComedy and on Instagram and Twitter @taylortomlinson.