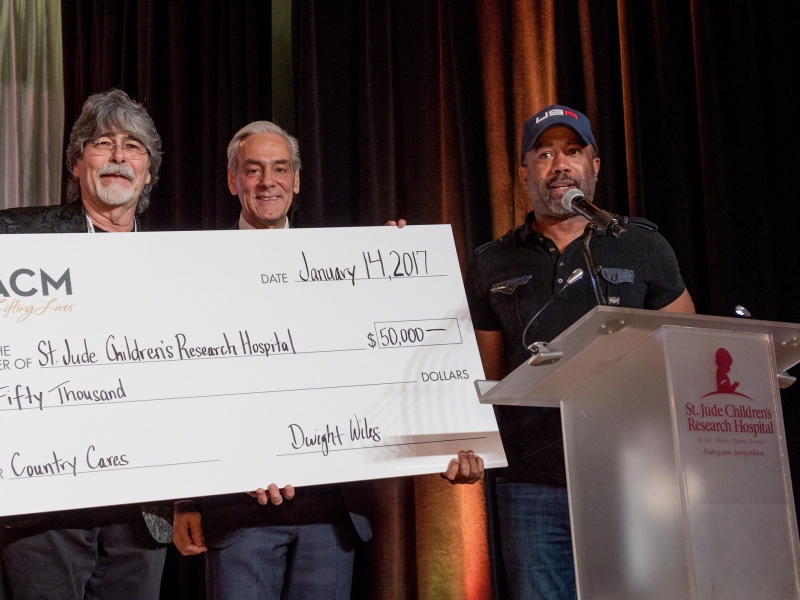 Rucker received the prestigious Randy Owen Angels Among Us Award, which recognizes individuals who have made exceptional and lasting contributions to St. Jude Children’s Research Hospital through their unique commitment and humanitarian spirit. Rucker is a staunch supporter who has championed the lifesaving mission of St. Jude for several years – lending his talented voice and passionate heart to raise funds and awareness for the hospital.

In 2016, Rucker hosted the seventh consecutive, star-studded Darius Rucker and Friends benefit, a sold-out concert that featured performances by Charley Pride, Hunter Hayes, Drake White, Terri Clark, LOCASH and Scotty McCreery. The annual event has raised more than $800,000 for St. Jude, helping to ensure families never receive a bill for treatment, travel, housing or food – because all a family should worry about is helping their child live.

In 2015, Rucker recorded “Possibilities,” a song inspired by courageous St. Jude patient Brennan. Rucker heard the tune when Brennan presented it to him, and he later recorded it at a session in Memphis with the help of patients at the hospital.

Rucker was surprised during the event with a $50,000 donation to St. Jude, given in his honor from ACM Lifting Lives, in recognition of Rucker’s charitable spirit and work with both St. Jude and the Academy of Country Music’s charitable arm. ACM Lifting Lives works to improve lives through the power of music.

“Darius Rucker’s generosity, passion and humanitarian spirit inspire us all, and we are honored to recognize him with this well-deserved award,” said Richard Shadyac Jr., President and CEO of ALSAC, the fundraising and awareness organization for St. Jude Children’s Research Hospital. “His numerous contributions and generous donations are a testament to his continued commitment to helping St. Jude save the lives of children suffering from cancer and other life-threatening diseases around the world. We are extremely grateful for the support of Darius and countless other country music artists who lend their hearts, time and talent to help further our mission.”

Rucker first gained fame as the lead vocalist and rhythm guitarist of the GRAMMY Award-winning American rock band Hootie & the Blowfish. Since then, he has dominated country music charts as a solo artist. Rucker recently signed on as host for the second season of “Reel South,” an anthology series highlighting 12 non-fiction stories from across the country, celebrating America’s rich tradition of southern comfort.

Country Cares for St. Jude Kids is recognized as one of the largest country music industry gatherings in the nation and brings thousands of country music industry leaders together to support the lifesaving work of St. Jude. Since 1989, the program has raised more than $650 million for the kids of St. Jude. Participants in the weekend event include country music artists, record label management, radio station general managers, promotions staff, national sales managers, program directors, and on-air staff who seek inspiration and to gain personal experiences that will help them promote and encourage support for St. Jude.

About St. Jude Children’s Research Hospital®
St. Jude Children’s Research Hospital is leading the way the world understands, treats and defeats childhood cancer and other life-threatening diseases. It is the only National Cancer Institute-designated Comprehensive Cancer Center devoted solely to children. Treatments invented at St. Jude have helped push the overall childhood cancer survival rate from 20 percent to 80 percent since the hospital opened more than 50 years ago. St. Jude is working to drive the overall survival rate for childhood cancer to 90 percent, and we won’t stop until no child dies from cancer. St. Jude freely shares the discoveries it makes, and every child saved at St. Jude means doctors and scientists worldwide can use that knowledge to save thousands more children. Families never receive a bill from St. Jude for treatment, travel, housing or food – because all a family should worry about is helping their child live. Join the St. Jude mission by visiting stjude.org, liking St. Jude on Facebook (facebook.com/stjude) and following us on Twitter (@stjude).

About Darius Rucker
Rucker first attained multi-platinum status in the music industry as former lead singer and rhythm guitarist of GRAMMY award-winning Hootie & the Blowfish. Since re-introducing himself to the world as a country artist, he has released four consecutive albums to top the Billboard Country albums chart and earned a whole new legion of fans. In 2014, Rucker won his third career GRAMMY award for Best Solo Country Performance for his triple platinum selling cover of Old Crow Medicine Show’s “Wagon Wheel,” off his album, True Believers. Rucker’s first two country albums, Learn To Live and Charleston, SC 1966 produced five No. 1 singles including “Come Back Song,” “This,” “Alright,” “It Won’t Be Like This For Long” and “Don’t Think I Don’t Think About It.” Southern Style, his fourth studio country album, features his latest No. 1 single “Homegrown Honey,” co-written by Rucker, label mate Charles Kelley of Lady Antebellum and Nathan Chapman. Rucker’s heartfelt new single, “If I Told You” is currently climbing the country charts. For more information and tour dates visit www.dariusrucker.com.