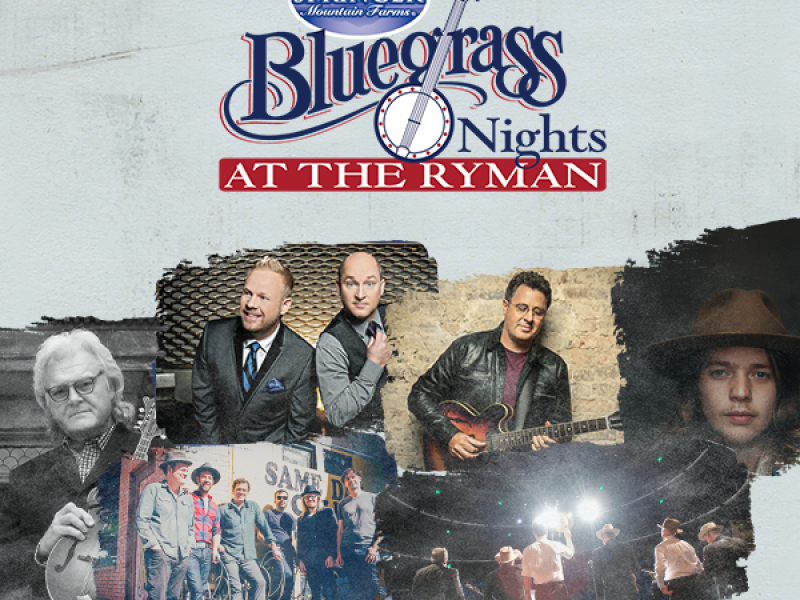 Springer Mountain Farms Bluegrass Nights at the Ryman is a Nashville tradition with a legacy nearly as strong as the building itself. This summer, the historic venue will celebrate the Thursday night music series with a lineup that includes Vince Gill, Dailey & Vincent, Ricky Skaggs and more. Presented by Springer Mountain Farms, the popular series will kick off on June 20, 2019 with performances by Billy Strings and Steep Canyon Rangers. In 1945 during a Grand Ole Opry performance, a young banjo player named Earl Scruggs joined Bill Monroe’s Blue Grass Boys on stage for the first time. As they combined harmonies, upbeat tempos and a new sound referred to as “high lonesome,” the result was a new, energetic sound of country music that lifted crowds from the Ryman’s historic church pews to their feet. “Bluegrass” was born, and Ryman Auditorium is now forever known as the “Birthplace of Bluegrass.” The venue honors Monroe’s legacy with a life-size statue on site, unveiled in 2017. After sitting dark and vacant for nearly two decades after the Grand Ole Opry relocated to its new home, the Ryman underwent renovation and reopened its doors on June 3, 1994. That same year, the venue introduced the first of what would become annual, “Bluegrass Nights at the Ryman,” which featured Bill Monroe and Alison Krauss. Now more than two decades later, the Ryman continues to celebrate bluegrass music’s contribution to music history with artists and fans alike. Weather depending, all performances will follow a pre-show “Pickin’ on the Plaza” event presented by Farm Bureau Health Plans on the Ryman’s 4th Avenue plaza, featuring live music from local bluegrass artists and bands presented by 650 AM WSM, food and drink specials from Cafe Lula, as well as giveaways and raffles including fan-favorite “Chicken Rich” presented by Springer Mountain Farms, a “Bluegrass Nights” sponsor since 2011. Series passes for 2019 are on sale now at ryman.com/bluegrass. Series passes retail for $165. Individual show tickets go on sale February 2 at 10 a.m. and retail for $30.50. Springer Mountain Farms Bluegrass Nights at the Ryman 2019 Lineup:June 20 – Billy Strings and Steep Canyon RangersJune 27 – To Be AnnouncedJuly 11 – The Earls of LeicesterJuly 18 – Dailey & VincentJuly 25 – Vince GillAugust 1 – Ricky Skaggs & Kentucky Thunder About Ryman Auditorium  A National Historic Landmark, Ryman Auditorium was built as a tabernacle by Captain Thomas G. Ryman in 1892, served as the home of the Grand Ole Opry from 1943-74, and was completely renovated in 1994. The Ryman is open for tours during the day and at night offers a wide variety of entertainment performances, just has it has for over 125 years. The venue was voted the 2010, 2011, 2012, 2013, 2014, 2015, 2016, 2017, 2018 Pollstar Theatre of the Year and recently took home its fifth-consecutive CMA Venue of the Year Award. Ryman Auditorium is owned by Ryman Hospitality Properties, Inc. (NYSE: RHP), a Nashville-based REIT that also owns and operates the Grand Ole Opry, Ole Red and 650 AM WSM. For more information, visit ryman.com. ### Press Contacts for Ryman Auditorium:Ebie McFarland | Megan NewtonEssential Broadcast Media, LLCebie@ebmediapr.com | megan@ebmediapr.com(615) 327-3259