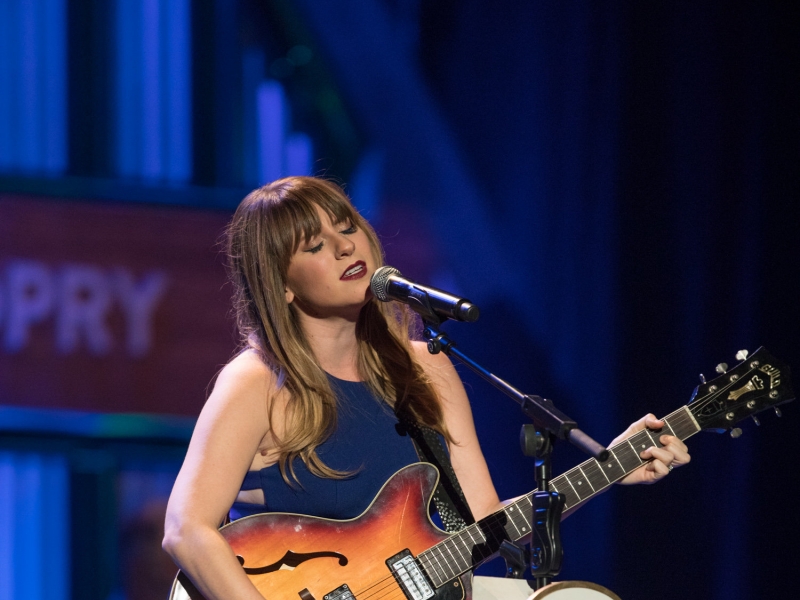 NASHVILLE, Tenn. – Singer/songwriter Caitlyn Smith made her Grand Ole Opry debut to an emotional full house at the Historic Ryman Auditorium on Saturday, Nov. 5.  The “bucket list moment” was one Smith had dreamed of since she began her musical career as a young teen, choosing to use her college fund to finance her first album in 2001. In the audience, Smith’s father watched his daughter, along with her husband Rollie Gaalswyk on guitar and producer Paul Moak on bass, make her debut on the stage where so many of Smith’s idols have stood before her.

“We have visited Nashville many, many times over the years, but this is our first show at the Opry,” noted Smith’s father, Jim Smith. “Caitlyn has always wanted our first Opry experience to be her Opry debut, because she knew she would be on this stage one day.”

The “virtuoso vocalist capable of torch, twang and a whisper-to-a-scream range” (Rolling Stone Country) delivered a passionate performance featuring two of the released tracks from her upcoming album Starfire:“Before You Called Me Baby” (co-writen by Matt Jenkins and Smith) and “Tacoma” (co-written by Smith and Bob DiPiero). The energetic audience of more than 1,500 folks applauded Smith as she exited the stage after the first of two performances on Saturday. The evening’s host and Country Music Hall of Famer, Connie Smith, commended Caitlyn saying, “She’s a good songwriter, but a great singer.” A flattering compliment considering Dolly Parton once said of Connie, “There’s only three females singers in the world: Streisand, Ronstadt and Connie Smith. The rest of us are only pretending.”

“It was an absolute dream come true to step onto the Ryman stage AND make my debut at the Grand Ole Opry on the same night,” said Caitlyn Smith. “There’s something holy about that place and you can feel it in the air. A night I will never forget for the rest of my life.”

Smith was recently inducted into the 2016 class of CMT’s Next Women of Country, which has included Brandy Clark, Sheryl Crow and Kacey Musgraves in past years. Smith’s songwriting credits include Hot AC No. 1 “Like I’m Gonna Lose You” (Meghan Trainor and John Legend) and the RIAA-Certified Platinum song, “Wasting All These Tears” (Cassadee Pope). She’s received cuts by Nashville icons including Garth Brooks, Dolly Parton, Kenny Rogers and more. Since releasing five tracks from her upcoming album Starfire, Smith has garnered more than 5 million streams on Spotify.